Photograph Courtesy of The Bancroft Library, University of California, Berkeley 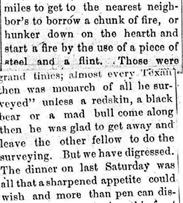 Samuel Erwin's daughter Louisiana (Louise) left Honey Grove in 1849 to go to the Gold Rush in California with her husband John Strentzel.  In 1849 she wrote back to her family in Honey Grove and in 1866 she wrote a letter back to Honey Grove to her brother, Jack Erwin.  Learn more about the Strentzel family and read the letters.

In 1892 Louisiana (Louise) Erwin Strentzel, when she was 71 years of age, Louise returned to Honey Grove, and a wonderful old settlers reunion was held.   A photograph taken at the reunion is above, and an article published in the Honey Grove Signal on August 25, 1892 is below.

A Meeting of Old Settlers

A Semi Sentennial gathering of Old Settlers met at the Erwin Springs on last Saturday.  Among the old settlers were sent, we noticed Uncle David Drennan and wife, A. J. and S. A. Erwin and wives, Mrs. Dr. Strentzel of Martinez, Cali., Mrs. Despain, Mrs. Eubanks, Mrs. W. S. Ryan and children, of Paris, Mrs. Jno. T. Allen, Mrs. Martin Wilson, Mrs. Maulding,  Mr. and Mrs. B. O. Walcott, Mr. and Mrs. J. J. Miller, Mr. and Mrs. J. E. Bricklin and B. B. Parish, of this city and Hon. V. Payton, of Windom.  There were fully 100 present but the above may be called Old Settlers.  There was four generations on the ground from Old Uncle David Drennan to his great grand children.  Just fifty years ago the Erwin family settled at this place, they had one neighbor who lived three miles away.  The family consisted of six members, father, mother, two sons and two daughters.  The father and mother have long since gone to their reward, but the four children A. J. and S. A. Erwin and Mesdames Strentzel, of Cal. and Despain, of Paris, were all present and in vigerous health.

As we looked upon that gay and happy throng chatting and laughing in the security of a Christian civilization, our mind wandered back to our earliest recollection of Texas, not fifty years ago, mind you, when the Buffalo were more plentyful than Texas cattle.

When my father used to stand in his cabin door in the morning and shoot down a deer before breakfast.  When the howling of the wolves made the night hidious, and the scream of the panther made it hard to keep your hat on your head, when wildcats, raccoons, rattle-snakes and other venemons, beasts, reptils and vermine were not only numerous, but dangerously common and frightfully familiar, and if it was that way in the fifties what must it have been in the early forties, when added to these was the terror of the Red Devils, when no one retiring at night felt sure that his hair would not be lifted before morning dawned.  In those days a boy had to go miles to get to the nearest neighbor's to borrow a chunk of fire, or hunker down on the hearth and start a fire by the use of a piece of steel and a flint.  Those were grand times; almost every Texan then was monarch of all he surveyed unless a redskin, a black bear or a mad bull come along then he was glad to get away and leave the other fellow to do that surveying. But we have digressed.  The dinner on last Saturday was all that a sharpened appetite could wish and more than pen can describe.  While enjoying this feast which looked like it might have been prepared for the Gods, the SIGNAL man thought he was receiving the especial and extra attention from the fair waiters, but when the repast was finished, and every other man who sat at meat with us, seemed to think the same way, then it dawned upon us that it was just the clever way the good ladies had of making each one feel free and easy, while at their table; but we forbear since our best attempt is but utter failure.  After dinner there was music, mirth and fun.  Mrs. Dr. Strentzel, in whose honor this entertainment was given, read the following paper, which will be read with much interest by all old settlers in Fannin county and elsewhere.

Dear Friends: - To many of you fifty years seems like a long, long time, but to me it has passed away like a dream.  It is fifty years today, since my father and mother with their four children came to this place to live, then a wilderness, now a flourishing city, our nearest neighbors were Capt. Yeary and family three miles away, and they had only a few months before our coming been attacked by Indians in broad day-light, Mrs. Yeary being dangerously wounded by an arrow, but fortunately the family all escaped with their lives.  It was not only the Indians we had to fear in those times but the many vicious people roaming the country and we living so lonely.  My father first built a small log cabin in which we resided the coming winter.  The next summer he built a larger house, the plank for the flooring being sawed by hand with a ship-saw.  This house is still standing.  The beautiful spring of clear cold sparkling water, when I first drank of it I thought it the best water I had ever tasted and when on the journey to California while traveling in an alkali desert we all came near being lost for want of water, how I longed for a draught from this cool spring.  My mother was very much dissatisfied with the new home, and begged father to take us back to the settlement.  I was delighted with the place, and tried to encourage mother by telling her that there would be a town here some day, she would reply; "yes child, may be so when we are all dead and gone."

The next year I was married and went away to live in another home [she went to Lamar County] and in 1849 removed with my husband to California, but father and mother remained here, and saw the town surveyed in 1851.

My sister and two brothers have resided in Texas, and to-day after fifty years, we four are permitted to meet again an unbroken band.

I have always loved the old home and have taken a deep interest in the welfare and progress of the town, and shall continue to so long as I live.  I am now old and know that in a little while I shall pass over to the other side, but trust that I may be permitted to come back and continue to feel the same love for you that I do now.

And what shall I say of my father and mother and my husband; I firmly believe that they are with us to-day, and rejoicing with us in our jubilee, our fiftieth anniversary, what a glorious thought.

And now may the Heavenly Father bless us all, and bless and protect and prosper the people who may live here in future years, even down to the end of time, is the prayer of one who will always cherish a loving memory for Honey Grove.

​NOTE:  Louise Erwin Strentzel died in 1897.  She is buried in the family cemetery about one mile from the John Muir National Historic Site.