The first bank in Honey Grove was owned by A. G. Stobaugh & Co. and the second bank by W. D. Wilkins, a merchant in Honey Grove.  A First National Bank was organized by W. Underwood. M. A. Galbraith and others in 1883.  In 1889 a fourth bank, the Planters National Bank, was organized by James T. Holt, T. B. Yarbrough and others.  Read more information on early banking below.

The next bank was the First State Bank, organized in August, 1909 by J. A. Underwood, F. W. Underwood, H. L. Allen and others.  This bank was later the State National Bank.  During the depression the name was changed to the American National Bank and it was purchased by the First National Bank.  See the 1931 article from the Bonham Daily Favorite below for more information.

​This building still stands on the southwest corner of the square.  The ad below is from 1907.

Image of a later version of the Planters National Bank (with cars instead of horses and wagons on the square) provided by Mary Anne Thurman.

By October 1931 the Planters National Bank was in receivership, and the building was sold to S. B. Evans, who opened a grocery store there. 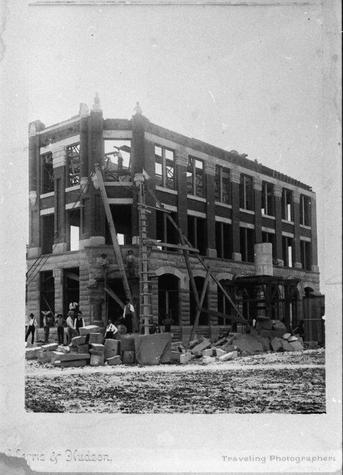 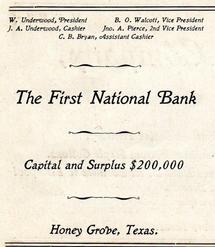 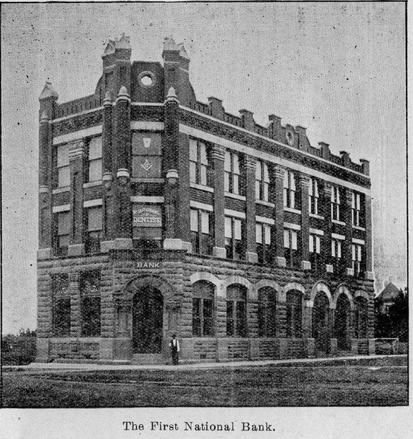 The announcement last Friday afternoon of the consolidation of the American National Bank with the First National Bank in Honey Grove came as quite a surprise to the people of this community, even though the details of the merger had been under consideration for several days.  The consolidation of these two banking institutions was successfully worked out by the officers and directors of them in such a manner as to create no excitement or confusion in financial circles, on on Saturday morning a sign on the door of the American National informed customers that they could be cared for at the First National.

No Change in Officers.

The First National Bank will continue to do business under the same title as formerly and no change has been made in the directors or officers of the institute thus far.  The annual meeting of the directors will be held on Tuesday, January 13, after which time a formal announcement will be made should there be any changes of the personnel.  Several members of American National force as now "carrying on" with the First National and the combined forces have been working day and night since the consolidation, the change involving a huge amount of work.  Active Vice-President  J. O. McKenzie stated that no change in the business policy of the First National would be made, except in their desire to be of greater service to the community, realizing even more keenly their responsibility to the community and their desire to extend and enlarge their banking territory.

Mr. McKenzie also authorized the announcement that bids had already been received for the remodeling of the entire interior of the First Nation Bank building which will be starting in the near future.  The marble fixtures of the American National Bank will be moved to the First National Bank building, the lobby increased in dimensions, as well as the office space, and the entire inside will be redecorated.  A new vault will be built immediately and will contain a large number of customers safety deposit boxes, this feature being one which has been needed her for some time.

The consolidation gives Honey Grove one of the strongest, if not the strongest and most solvent bank in Fannin county.  It is affiliated with the Republican National Bank and Trust Co., of Dallas, one of the most influential banking concerns in the Southwest, and this lends influence and power to the local institution.  The past year's business was a most satisfactory one, the bank having declared 6 per cent dividend during December.  The institution has the good will and confidence of our entire citizenship and will have the go-operation of all.

Since the consolidation of the two banking institutions, the total individual deposits of the First National Bank run something over a half million dollars, making the Honey Grove institution one of the largest in this respect in this section.  A condensed statement of the combined institutions will appear in the next issue of the Signal-Citizen, and will show the bank to be one of which any community might well feel proud. - Honey Grove Signal-Citizen 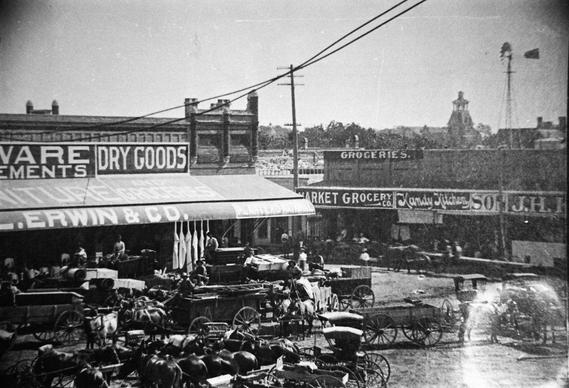 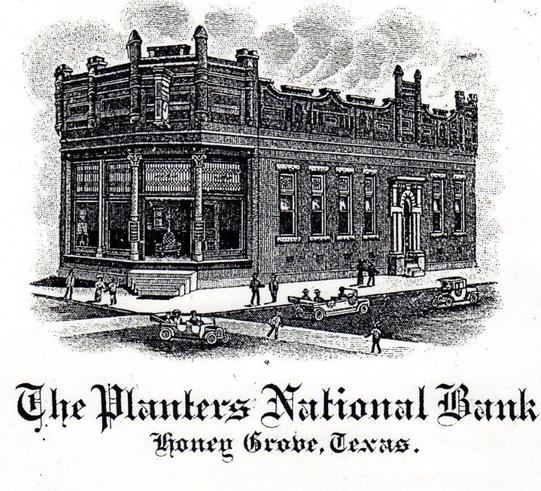 ​The Planters National Bank was located on the northeast corner of the Square.  You can barely make out the words on the awning to the right of Erwin & Co. in the photo.