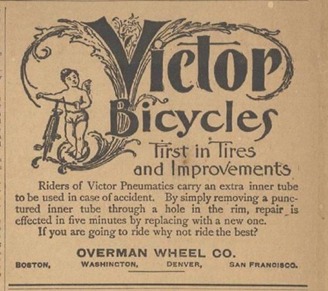 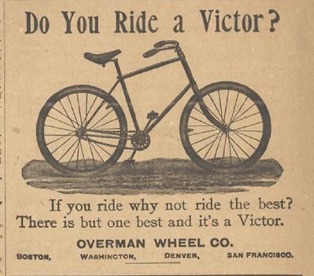 ​The bicycle craze has struck Honey Grove, and struck it hard.  There are now several handsome safeties in the city and the number is rapidly increasing.  The sport is fascinating and healthful and a person can get over ground mighty fast after mastering the wheel.

​A series of bicycle races will be inaugurated as soon as the roads are in good condition.  The races we learn will take place on the pubic square weekly, consisting of eight laps, estimated at one mile.  A gold medal will be donated by the merchants to the fastest rider to change hands as often as there is a change of winners.

The business and professional men of Honey Grove have purchased a beautiful gold medal to be awarded each week to the fastest bicycle rider.  The time, distance and route to be fixed by the Wheelmen's Club.

The Wheelmen's Club has set Friday, this evening, at 6 o'clock for the first contest.  They begin at Southeast corner of the Public Square, at Hockaday, Gray & Co's, corner; thence east of Market street to Fourteenth street, thence north on Fourteenth to Elm street; thence west on Elm to Eighth street, just west of Prof. Kendall's resident; thence to place of beginning by any route preferred.

Charles Fiquet rode his bicycle Tuesday from Greenville to Honey Grove, a distance of 46 3-4 miles as measured by the cyclometer on his wheel, in 3 hours and 45 minutes, an average of 12 1-2 miles an hour.  This was remarkably good time and again verifies the statement that the wheel is a vehicle of general utility.

Theodore Fiquet left yesterday morning on his bicycle for Houston.  It is a long ride but Theodore believes that he can make the run in about four days.

Precious Lewis, col., went to Paris yesterday and ran a half-mile bicycle race with the champion colored rider of that city.  Precious won the race, making the half-mile in 1:20, and is happy as Junebug this morning.

​Theodore Fiquet left for Houston on his bicycle at 10 o'clock last Thursday morning and Sunday afternoon he arrived safe and sound in the bayou city.  On account of rain he was forced to ride a short distance on the train.

The second of the series of bicycle races will take place this evening promptly at 6 o'clock.  On account of the rough condition of the streets the race has been changed to a ten mile road race and will be from the public square to Windom and return.

The second of the series of bicycle races was run last Friday evening and Joe McKee is wearing the medal this week.  There were only two entries, Charles Fiquet and Joe McKee, and as Charley was known to be the fastest rider Joe was given a two-minute start.  The race was 5 1-2 miles with a 1 and one-half minute rest at the half-way post.  McKee came in about 40 yards ahead.  Time Fiquet 22 minutes; McKee 23 minutes, 10 seconds.

Forest Hill went over to Paris last Friday and won the half-mile race.  There were four entries, including the crack wheelmen of Paris, but Forest road away from them without the least trouble.  The prize offered was a pair of bicycle shoes.

A number of the bicycle boys rode to Paris Sunday evening and returned Monday morning early enough to begin the week's work on time.

Bicycles bid fair to come into general use in a short time. Already several orders have been placed for new wheels and one agent told us this week that he expected to sell at least twenty in Honey Grove next season.  The time will soon come when a gentleman or lady who has much riding to do cannot afford to be without a wheel.  A fair rider can easily make three times the distance traveled by a horse in a given time and the wheel consumes no corn and oats.