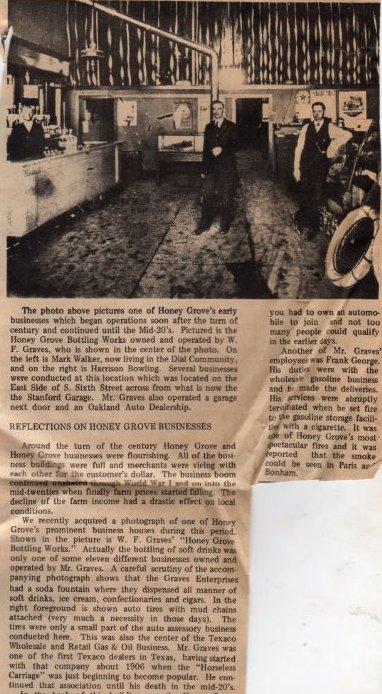 The photo above pictures one of Honey Grove's early businesses which began operations soon after the turn of century and continued until the Mid-20's. Pictured is the Honey Grove Bottling Works owned and operated by W. F. Graves, who is shown in the center of the photo. On the left is Mark Walker, now living in the Dial Community, and on the right is Harrison Bowling. Several businesses were conducted at this location which was located on the East Side of S. Sixth Street across from what is now the the Stanford Garage. Mr. Graves also operated a garage next door and an Oakland Auto Dealership.

Around the turn of the century Honey Grove and Hooey Grove businesses were flourishing. All of the business buildings were full and merchants were viewing with other for the customer's dollar. The business boom continued unabated through World War I and on into the mid-twenties when finally farm prices started falling. The decline of the farm income had a drastic effect an local conditions.

We recently acquired a photograph of one of Honey Grove’s prominent business houses during this period. Shown in the picture is W. F. Graves’ "Honey Grove Bottling Works.” Actually the bottling of soft drinks was only one of some eleven different businesses owned and operated by Mr. Graves. A careful scrutiny of the accompanying photograph shows that the Graves Enterprises had a soda fountain where they dispensed all manner of soft drinks, ice cream, confectionaries and cigars. In the right foreground is shown auto tires with mud chains attached (very much a necessity in those days). The tires were only a small part of the auto accessory business conducted here. This was also the center of the Texaco Wholesale and Retail Gas & Oil Business. Mr. Graves was one of the first Texaco dealers In Texas, having started with that company about 1906 when the "Horseless Carriage” was just beginning to become popular. He continued that association until hiss death in the mid-20's.

In the back of this building was the Honey Grove Bottling Works where several flavors of soft drinks were mixed and bottled. The bottling machine was rather crude by todays standards and the capping machine was foot power operated. The equipment was ably operated for a considerable time by Edgar "Slick” Bogan, a colored handyman who could do nearly anything. In the back of the photo is shown Dan Baker and the bookkeepers' desk which was occupied by Bayless Warren. During this time Bryan Poston were employed here attending to numerous duties.

Just to prove his versatility in business, Mr. Graves was an agent for a clothing manufacturer and took orders for “Tailor Made Suits”. You could look over his stock of samples, get your measurements taken and in a short time you could come back for your suit.

Mr. Graves was one of the very early pioneers in the automobile business. He was a dealer for Oakland Automobiles (The showroom being in the building now occupied by the Stanford Garage on S. Sixth St.) Next door to the Honey Grove Bottling Works was the Graves garage where all models of cars could be repaired. The garage was the meeting place for the Honey Grove Auto Club. This auto club was a rather exclusive organization since you you had to own an automobile to join and not too many people could quality in the earlier days.

Another of Mr. Grave's employees was Frank George. His duties were with the wholesale gasoline business and he made the deliveries. His services were abruptly terminated when he set fire to the gasoline storage facility with a cigarette. It was one of Honey Grove's most spectacular fires and it was reported that it could be seen in Paris and Bonham. 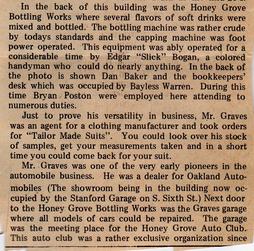