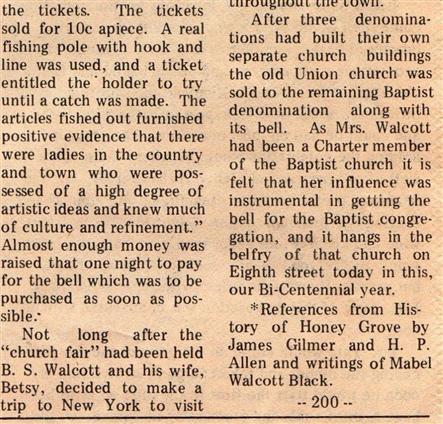 As mentioned elsewhere in this history of Honey Grove, the first church for the fledgling town was the Union Church in which four main denominations took turns on alternate Sundays in the use of the building for religious services.  The church building had been constructed about 1956 on land donated by B. S. Walcott.  At that time there was no bell anywhere in the area that could be purchased for use with the church and initially there was no money available even if a bell could have been found.  Soon the citizens and members of the various denominations decided that they definitely needed a bell for the church and that it was necessary to have a large bell.

A plan was soon worked out by various person for raising the money for the bell and the decision was to hold a "church fair" in which all citizens of the town or surrounding countryside could participate. "in preparation meetings were held and committees appointed to conduct every phase of the fair.  The appointed night came on and a large crowd was in attendance.  Booths had been set up and if one was hungry he could buy the best of coffee, cakes, pies and delicacies of many kinds.  Also to be had was fine needlework done by some wonderfully talented ladies as well as knitting, neckwear and dolls.  The booth that netted the largest profit was a fishing booth.  Its construction was of a wooden frame set up around six or eight feet of floor space with cloth tacked all around it so no one could see over the top.  The articles to be fished out were scattered on the floor.  A bevy of young ladies conducted the affair.  One sat at a table and sold the tickets.  The tickets sold for 10c apiece.  A real fishing pole with a hook and line was used, and a ticket entitled the holder to try until a catch was made.  The articles fished out furnished positive evidence that there were ladies in the country and town who were possessed with a high degree of artistic ideas and knew much of culture and refinement."  Almost enough money was raised that one night to pay for the bell which was to be purchased as soon as possible.

Not long after the "church fair" had been held B. S. Walcott and his wife, Betsy, decided to make a trip to New York to visit Mr. Walcott's family and toKentucky where they were to purchase goods for his general mercantile store.  While in Kentucky they met Miss Ann Murrell of Adair county (who was later the mother of Mrs. Annie Brewer) who was on her way to Honey Grove to visit relatives, and she traveled with them back to Honey Grove via New Orleans and Jefferson, Texas.  While in New Orleans Mr. and Mrs. Walcott purchased the bell for the church and made arrangements for its shipment to Honey Grove.  The bell was transported by sea from New Orleans on a schooner and then transported inland to Jefferson by side-paddle river steamer.  From Jefferson the method of travel was ox-wagon freight line which was being operated at that time by J. B. McKee of Honey Grove.  That was in the year 1857 and this church bell has been in Honey Grove since that time, some 119 years ago.

"A custom grew into use which was to toll the bell in the Union church at a very slow rate for funeral occasions.  When there was death in the community most everybody would attend the deceased's services.  A man would be stationed up on the frame on which the bell was mounted, out in the open air, and as the funeral procession neared the town, he would, with a wooden mallet, slowly pound on the bell and keep it up until the grave was filled.  The solemnity produced as almost more than some could bear."  As the church and its bell was located where the present day high school now stands and the cemetery was about 1/4 mile north of that site, the bell could not only be heard on a still day at the cemetery but could also be heard throughout the town.

After three denomination had built their own separate church buildings the old Union church was sold to the remaining Baptist denomination along with its bell.  As Mrs. Walcott had been a Charter member of the Baptist church it is felt that her influence was instrumental in getting the bell for the Baptist congregation, and it hangs in the belfry of that church on Eighth street today in this, our Bi-Centennial year.

References from History of Honey Grove by James Gilmer and H. P. Allen and writings of Mabel Walcott Black.