The following information is from One Hundred Years and a 2012 Church of Christ Directory.

After a gospel meeting held by Br. G. A. Dunn, Sr. in June, 1926, about 20 persons began to meet as the Church of Christ under the old city tabernacle.  Among the early church members were such names as Mann, Meade, Thomason, Chapman, Herring, J. A. Strevenson, Martin, Parham, Hodges, Mimms, Seay, Dyer, Dykes, Lightfoot and many others.

The following fall of 1927 they purchased a house at 1102 West Main where the church met until a new house of worship was built in 1940 on Main Street.  In 1960 the current church was erected on Main Street.

Some of the early preachers were Bro. Webb of Windom, Bro. Smith of Sherman, Bro. Pope of Paris, Bro. Swearingen of Wolfe City, Bro. Mann (a leader of the congregation and elders who preached and taught when no one else was present), Bro. Robert Cook of Paris, Bro. Buchanan of Leonard, Bro. Freeman of Commerce, and Bro. Broadfoot of Honey Grove. 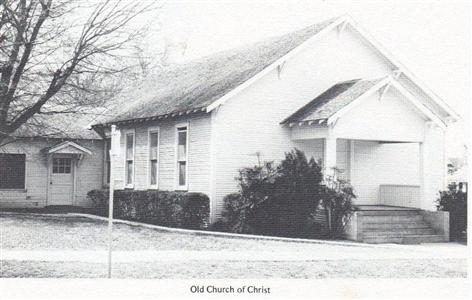