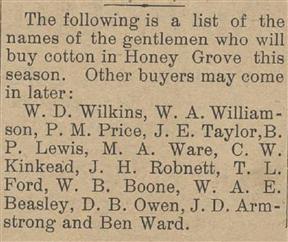 The following is a list of the names of the gentlemen who will buy cotton in Honey Grove this season.  Other buyers may come in later:

The two photos above ran as one photo in the July 6, 1973 Honey Grove Signal-Citizen  (see below).  It gave the names of the individuals pictured as follows:  Ray McCurdy, Virge P. Shirley, W. H. Skinner, Claude Lovell, Vaden L. Cooper, a Mr. Patterson, Ray Chapman, Claude Elliott, Jeff Gunn, an English cotton buyer for E. E. Blocker whose name is not known, Fulton W. Ware, A. M. Ware and A. M. Livingston.  However, there are more individuals in the photo than there are names, so we cannot be certain who is who. 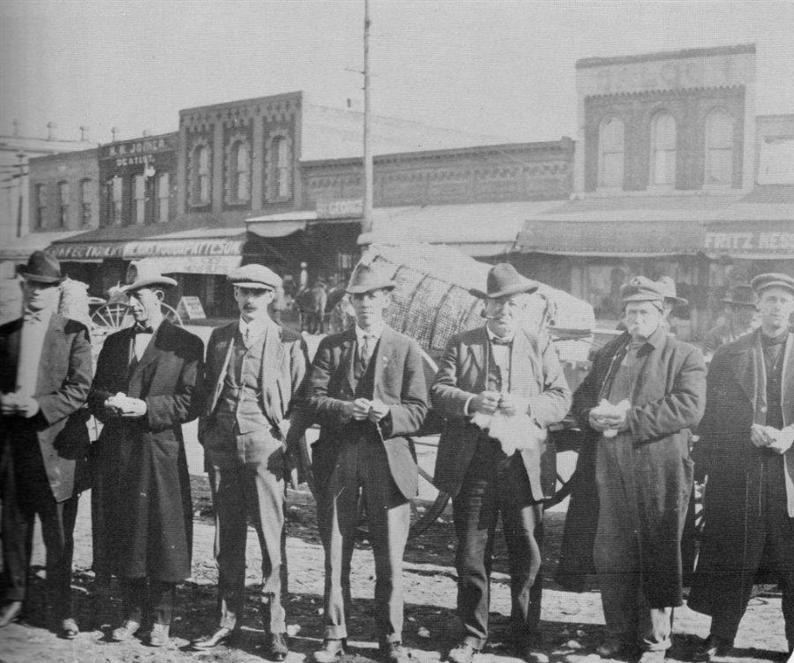 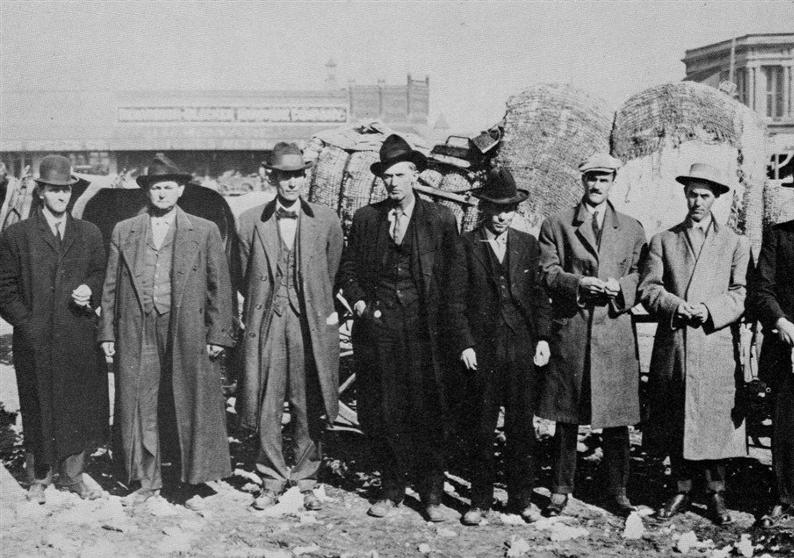 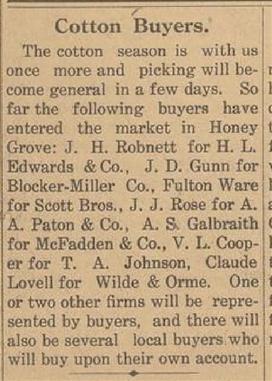 ​Photo and information from One Hundred Years.

Cotton Buyers.  The cotton buyers on the square linked the cotton farmer to the commercial world, to the market economy of Galveston, Liverpool, England, Tokyo and St. Louis.  The buyers were important because the profit of a whole year's work was determined, in some cases, by a single transaction.  In the fall the farmers ginned their cotton, brought it in to town and sold it.  The price depended upon the time of year, the quality of cotton and the going price.  (Text and photos below from John Black's Pictorial History of Honey Grove, Texas)

The cotton season is with use once more and picking will become general in a few days.  So far the following buyers have entered the market in Honey Grove:  J. H. Robnett of H. L. Edwards & Co., J. D. Gunn for Block-Miller Co., Fulton War for Scott Bros., J. J. Rose for A. A. Paton & Co., A. S. Galbraith for McFadden & Co., V. L. Cooper for T. A. Johnson, Claude Lovell for Wilde & Orme.  One or two other firms will be represented by buyers, and there will also be several local buyers who will buy upon their own account.

The Cotton Weigher was an elected official.  The elected cotton weighers for Honey Grove are listed below.  (information from One Hundred Years)

Lloyd Hopkins (did not serve)