Honey Grove court records from the early times are called various names.  We have scanned volumes from 1896-1905.

These documents are very interesting, and contain 1 page for each offense under the name of the individual convicted of the offense.

In this example, Moses Williams is convicted of "hanging on moving train" and is fined $5.00 plus court costs. As there are many instances of this offense, this may have been persons trying to illegally get a ride on a train.  Other common offences are assault, disturbing the peace, gaming, drunkenness, theft, abusive language, selling liquor, unlawfully carrying a pistol, vagrancy and prostitution.  Many offenses resulted only in fines, but some result in jail time. 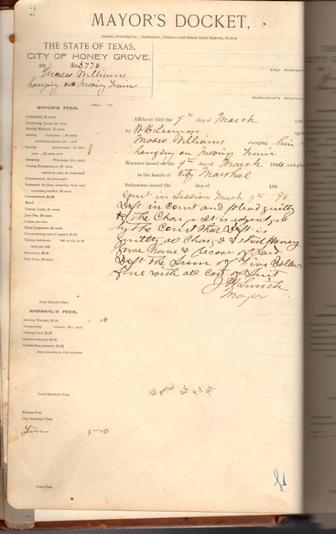