Just what route did Davy Crockett take on his trip to San Antonio to defend the Alamo? Did he pass through Fannin and Lamar counties? History and historians contradict themselves and some do not believe that Crockett was in this area. But not so with Mrs. Carolyn S. Scott of Paris, writer and historian, who recently took it upon herself to trace his route once and for all, and she has proven without any doubt that Crockett’s route led him through Paris and on west through Honey Grove, and, from which visit Honey Grove received its name. Mrs. Scott was recently appointed by a historic society of Paris to secure, if possible, the most reliable information in regard to Crockett’s visit to this section, and after considerable effort has found proof of her contention. This being proven, she wrote the following letter to State Press of the Dallas News (which had claimed that Crockett had NOT been in this area).

Recently, in the Dallas News, you wrote an article in which you stated that David Crockett was never within 80 miles of Paris, Texas. I judge your information concerning Crockett came from his autobiography. After reading it I too was in doubt, so I have taken the trouble to see if it is authentic.

From Crockett’s grandson, Mr. Ashley M. Crockett of Granbury, Texas, I find that Crockett’s children claimed that the first twenty-four chapters of this biography were authentic but that there was a great deal of fictitious matter in the remaining chapters, which happen to deal with his trip to Texas. As these chapters were taken from his diary which was found on his body and not given to his family for many months after his death, it is possible some pages were lost or disfigured. This is the conclusion at which I arrived after gleaning much information that I can not disregard and which fits in nicely with the remaining chapters of the autobiography.

From Mr. Pat Clark at Clarksville, who had frequently talked to “Old Uncle Henry Stout,” who acted as guide to Crockett when he came to what is now Paris and Honey Grove, I have learned the following facts. These facts Mr. Clark has sworn to before a Notary Public; they are also in printed form in a brief history of Red River county.

Mr. Clark’s grandfather, James Clark, was the first man who built a house on the present site of the city of Clarksville, in the year 1832 or 1833. Mrs. Isabella H. Gordon was Mr. Clark’s paternal grandmother. From both these sources, as well as the guide, Mr. Stout, these facts have been passed down.

As Davy Crockett neared Red River in the year 1835, in the fall, after having left Little Rock on his way to what is now San Antonio, he inquired where he could find his friend John Stiles. He found out he was living on the south bank of Red River near Clarksville. He rode up the river to Fort Towson, then across to what was then Jonesboro, a trading post, and then down on the south side to John Stiles’. This part of Texas was then Arkansas.

Mrs. Gordon, above mentioned, had been recruiting soldiers to send to Colonel Travis at Bexar, as San Antonio was then called. It was not until Crockett left Mr. Stiles’ that Mrs. Gordon knew he was so near. She had her horse saddled and went out to head him off. This he did at a place called Robinsville. She persuaded him to wait for a few days until she could send some recruits with him. Mr. Robbins as well as Captain Becknall, over heard the conversation and they told Crockett if he would wait they would get up a bear hunt for him. He agreed, and Henry Stout, then eighteen, was asked to guide them.

They came the next day to what is now Paris, where they camped for lunch under a grove of oaks. Here Crockett carved his name on one of the trees. Here many years afterward was found a hunting knife of the type used at that time. This is now owned by Mr. Early, the great grandson of Mr. Robbins.

That night Crockett and his friends went to the home of John Click, about ten miles from the grove. There he made a “lizard” or “spider”, a crudity which was used for hauling water. After Crockett became famous, this relic, known as “Davy Crockett’s spider” was kept in the courthouse at Paris until the fire of 1875 which destroyed the building.

Crockett, while at the Click’s, tried to find a trail that would take him to San Antonio due south. He found due south a dense thicket, known then as “Journigan’s Thicket.” This he could not penetrate. Then he turned west and he and his company ran into tall grass alive with bees and honey. In the midst of the grass was a grove of trees and Crockett named the place “Honey Grove”.

From there they must have gone still further west to Choctaw and Bois d’ Arc Creek, to which he refers in a letter to his daughter.

According to Mr. Clark, Crockett retraced his trail arriving in Clarksville again where the recruits were waiting for him. He crossed the river again and went down to Fulton where he took the steamboat to Nachitoches, La., and then to Nacogdoches. After Crockett left Nachitoches and crossed Red River into Texas he came to the Sabine River and there he met Mr. Gordon with a company of men who had been on a scouting expedition. It was here Crockett told Gordon of this meeting with his wife at Clarksville. Two days later Crockett was in Nacogdoches, where he signed a pledge of allegiance to the new republic of Texas. This paper is in the archives at Austin, Texas, 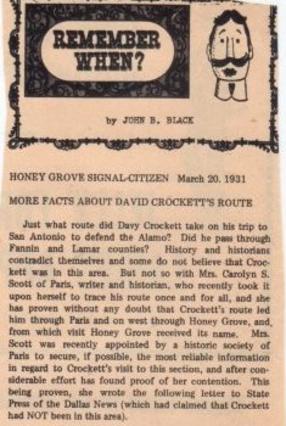 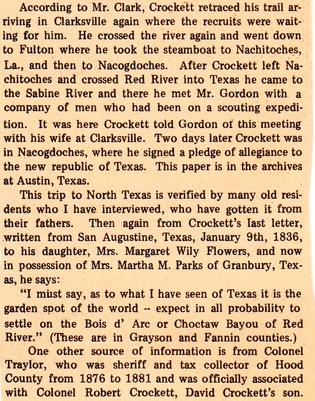 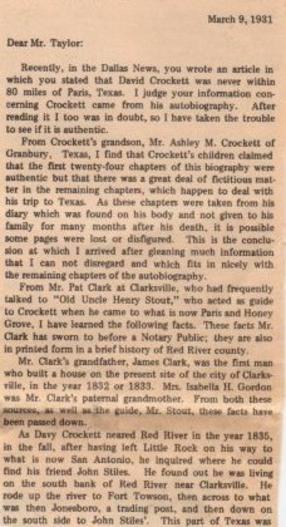 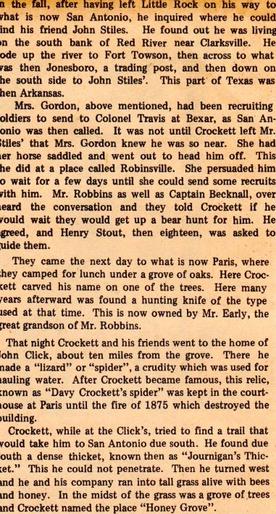