[The following essay received first honors in a contest of the composition class of. the high school department of the Honey Grove public school. Besided being published in the local papers it is to be sent as a contribution to the World’s Fair by the Shakespeare Clubof. this city.}

In the northeastern portion of the State, from Red River county on the east to Cooke county on the west, are a .number of counties bordering on Red river and comprising the best agricultural portion of  the State.  About midway in this productive region, near the eastern border of Fannin county surrounded, bv a prosperous and agricultural people, stands the city of Honey Grove.

Early in the year of 1936, David Crockett, with a small company .of men on their way to join the Texan army at San Antonio, camped in the grove just north of the public square. In the grove was a spring of fine water, about which the company spread their  blankets and.built their fires.  While in camp here they discovered quite a number of trees containing swarms of bees with honey, Crockett carved  the name "Honey Grove" on a tree, and when referring to the memorable camp here, Crockett always spoke of it as "Honey Grove."  The name was adopted by every one else, and in course of time it was transferred to the town.

The first settler was Mr, Samuel Erwin, father of Mr. S. A. Erwin,  one of;our fellow-townsmen.  Samuel Erwin was born in Tennessee and was united in marriage by David Crockett, when Crockett was a magistrate.  He came to Honey Grove in the summer of 1842 and built the first house, which is still standing is now being used as stable by Mrs. M. H. Wood.  Samuel Erwin was a surveyor and while out surveying with his men near this place, they discovered an Indian following them to locate their camp.  They grew tired of his following them in this manner, and after a running fight they killed him.

The last attack made by the Indians on the family of Captain Yeary, four miles south of here, at the place known as Sherill Spring, in March 1842.

The second settlers were Dr. Nicholson and his brother, Captain E. J. Nicholson, who settled in Honey Grove in 1845, and they were quickly followed by John McKenzie.

Next came John T. Allen and James Gilmer in 1845.  Mr. Gilmer bought most of the land within the present limits of the city.  Mr. Gilmer died in 1846, being th first person buried in Oakwood cemetery.

In 1847 came B. S. Walcott, who, in partnership with Samuel Erwin, opened the first store and postoffice, which was conducted in a room of Mr. Erwin's residence.

In 1849 B. S. Walcott laid out the town of Honey Grove, and buildings began to rise here and there.

The first blacksmith shop was owned by Fuqua and Ribble.

The first school was taught by Judge Rutherford, in 1850, in a rough building, northeast of where the public school building now stands.

In the year 1856 four religious denominations, Baptist, Methodist, Cumberland Presbyterian, and Christian united in building the Union church, the first public building, except the small school building mentioned above.  The church is still standing and is used as the dining hall for the Commercial Hotel.

In 1856 the Smith Hotel was built by Granville Tucker and stood on the corner where the Pierce-Wood brick building now stands.

In 1856 the old flouring mill was erected by B. S. Walcott and stood until the fall of 1882, when it was destroyed.

The present flouring mill was build in the years '85-'86 by a joint stock company and stands a short distance east of where the old mill stood.

In the year 1874 B. S. Walcott erected the first building of stone, from the quarries south of the city.  It stood on the site of the present Walcott block and was ruined by fire in November 1874.  It was rebuilt in a far better style in 1878-'79.

The town was incorporated under a special charter in 1873.  In '74 the Texas and Pacific reached here.  The Santa Fe railroad was built in 1885.

In 1874 the Independent, a weekly newspaper, was established by T. B. Yarbrough.  We now have two newspapers, the Citizen, edited by Messrs. Moyer and Thompson, and the Signal edited by Mr. Lowry.  They are both thriving papers and are the best to be found in North Texas.

The building known as Wall School was built in the year 1875, under the auspices of the Paris District of the M. E. Church, South.  This school, from the time it began, has done a great deal toward the building up of the town.

The dramatic hall was built in 1878 by a joint stock company.  It was a one-story frame building with gallery.  It had ample room for two hundred persons.  As the name implies, it was bused for theatres, concerts, etc.  Several years after the property was purchased by Dr. Meyer, and in 1893 he moved part of the building into the eastern portion of the city and used it for a hospital. The other part still stands, and after being remodeled is now used as the magistrate's office.

The Walcott Institute, so named in honor of B. S. Walcott, was built in the summer of 1881 by J.S. Kendall.  It was two-stored frame building 38x56 feet.  In 1890 it was moved into the eastern portion of the city and is ow being used as a public school for the colored.

The Methodist church, built of the stone from the quarries, was begun in 1880 and completed in 1881, and will easily accommodate four hundred and fifty people.

The Presbyterian church was built in '80 and has a seating capacity of two hundred persons.

In 1884 the Baptists erected a neat church, with a seating capacity of about 200 and fifty.

A joint stock company was formed here in July 1883, for the purpose of establishing a telephone system from Honey Grove to Ladonia.

In 1883 the First National Bank was established.  Their present building, situated on the corner of Fifth and Market streets, was built in 1891.

In 1889 the Planter'a National Bank was established.  The north side of the square, including the Planter's Bank, was burned in 1898 and later rebuilt.

Our present public school, a spacious stone building, three stories in height, with a seating capacity of about six hundred pupils was built in the fall an winter of 1890 and 1891.  It stands on the site of the Walcott Institute.  Honey Grove has always been proud of her schools, and more especially of the public school, as it is second to none in the state.

The oil mill was built in 1891, and is a very substantial brick building.  The company owning the oil mill dug a large lake, one mile north of town, for the purpose of furnishing a water supply for the city.  The lake covers about sixty acres and varies in depth from five to forty feet. It was completed in 1881, and is one of the largest lakes in North Texas.

In 1880 th business of Honey Grove had increased to such an extent that the public square was not large enough and in the winter of '80 and '81 the square was enlarged by moving its limits one block to the south.  There are now about eighty substantial business houses here.  The assessed valuation of the town is $1,700,000.00.  The cotton receipts of Honey Grove have been as high as forty-three thousand bales.  The prinipal products are: cotton, corn, wheat, cats, alfalfa, sugar cane, fruits and vegetables.

Such is a limited sketch of the city of Honey Grove up to the present time, March 21, 1904.

Instead of th wigwam of the Comanche, now stands many beautiful residences, of which any city would be proud.  From Mr. Samual Erwin's family to the present time the population has increased to be four thousand.  It has been proposed more than once to change the name of this city from Honey Grove to Fannin, the same as that of the county; but this proposition met with quiet resistance from the majority of the older inhabitants, with whom the name of Honey Grove was associated with almost sacred memories of the past.  Out of respect to these the young men prefer to remain content with a name once applicable but now outgrown.

Although the year 1905 is written on the copy in our possession, we are not certain of the date it was published, but it states it is current up to March 21, 1904. 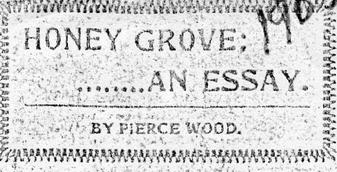