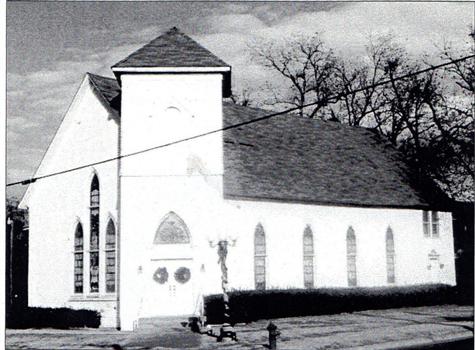 A more detailed history of the First Christian Church is available on the Fannin County GenWeb site.

In Memory Of Mary M. Galbraith 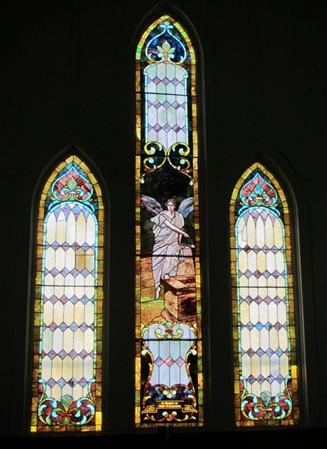 When the First Christian Church was built about 1884 or 1885, the foundation was laid on the lot just off the square where the Magnolia station is located on East Main Street.  Two years passed before money could be secured to build the walls.  The men of the church who could drive nails got it ready for the roof that was "so steep it would split a raindrop."  The work was stopped again for lack of funds.  The men made crude benches and the women completed different projects to raise money for the windows.  The stained glass windows were installed about 25 years later.

Dr. L. C. Page and J. H. Lowry were the capable leaders of the early years.  The most ardent worker among the women was Mrs. Tom Trout.

In 1926 the church split and lost quite a few members to the organization of the Church of Christ.  First Christian Church was reorganized at that time.

On May 24, 1936, a committee of J. E. Thomson, Bill Rieves and Mac Eversole planned to the church moved from Seventh and Main to the church property on Second and Main, which had been donated many years earlier by Mr. and Mrs. M. A. Galbraith.  The church parsonage, located on this lot, was to be moved to the north side of the lot and the church building to be placed on the south side, where it is now.

First Christian Church held services in the Episcopal Church until they could return to their church for makeshift services in September, 1937.  J. E. Thomson and C. M. Campbell were on hand practically all the time, from the moment Mr. Bales and his workmen from Bonham started moving the church until the carpenters and painters had finished.

First Christian Church building is a mixture of denominations.  The room on the north, attached to the main building, was a part of the old Presbyterian Church that was located on the corner of Pecan and Eighth Streets.  In 1947, the Christian Church purchased the McKenzie Methodist Church Annex, moved it to the north of the church, repaired and remodeled the building and now uses it for Sunday School rooms and Fellowship Hall.