The following is from Our Town, Windom Texas. 1972.

The Christian Church of Windom represents one of Windom's oldest Religious Sanctuaries.

According to County Clerk's records, the Windom School Board, composed of W. H. Dowlen, V. Peyton, W. P. Chapman, W. A. Cooper, and J. H. Baldwin, sold the Northwest quarter of Block no. 8 for the sum of $80.00 on June 12, 1897 to the Christian Church of Windom.  Until that time, this was school property, and Windom's only school was operated on this ground.  Even though this deed was executed in 1897, it is interesting to note that it wasn't recorded until 14 years later on May 19, 1911.  This building was constructed immediately, by monetary gifts of members and voluntary labor, and religious services have been held continuously in this same building for 75 years.  This gives proof of the sound materials and effective and thorough workmanship of these early day Christian citizens of Windom.

The only changes in the original structure of the church building are the additions of the two class rooms and Baptistry (covered by the flat roof) on the East end in 1914, and the removal of the top part of the tower and steeple on the west end in 1947.

The first assembly date of this congregation is not a matter of record, but the Christian Church of Windom was active several years before the above dates.  This fact is easily established by Mrs. Lou Spelce who was born in Windom and who attended here when she was a girl.  Mrs. Spelce still lives north of Windom.  She has been a member of the Christian Church of Windom for 73 years, joint the Church at the age of 17.

The membership of this church continued to grown in numbers probably reaching its peak between 1914 and 1920.  At times during this period it is known that as many as 150 persons were in attendance in Sunday School.  However, it wasn't until after 1935 that the attendance started to decline greatly just as the population declined in Windom with the most of the younger people leaving this are to go elsewhere.

For many years before the 1897 era, there were established denominations in Windom; namely, Baptist, Methodist, Presbyterian and Christian and all of these convened in the School Build which was located on the same ground where the Christian Church stands today; and it was the custom for each denomination to have the Church services for one Sunday during each month.  Many Union revival Meetings were held and this procedure continued from time to time as late as the summer of 1936.

It is regrettable that the complete records of the early Christian Church cannot be found, but some recordings of meetings are available, and certain family names appear again and again.  this list is entirely too lengthy for publication in this brief history; but, we pay our respects to all of these Christian citizens who so prominently gave of their time . . . talents . . . and money, not only to the Christian Church, but to the entire Windom Community.

Hundreds and hundreds of people have been actively involve din the Christian Faith through the years by participating in the wonderful fellowship on with the other in Christ.  this association has brought love, laughter, enjoyment, comfort in time of sorrow and strength of character to me that wouldn't have existed otherwise. 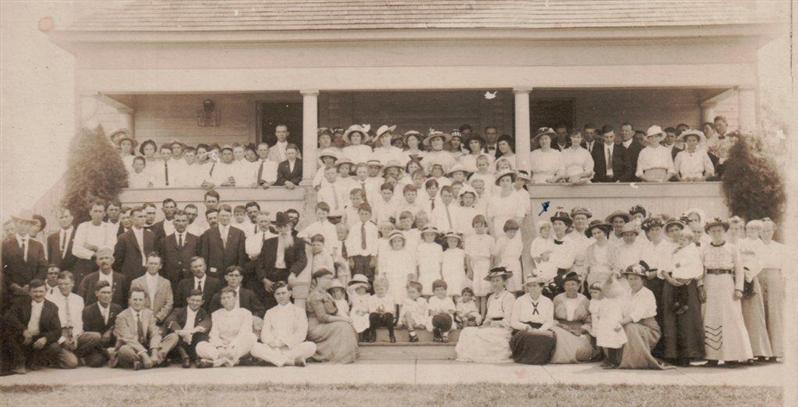 Photos from the Fannin County Historical Commission.  Second photo from 1914.

The church building no longer exists. 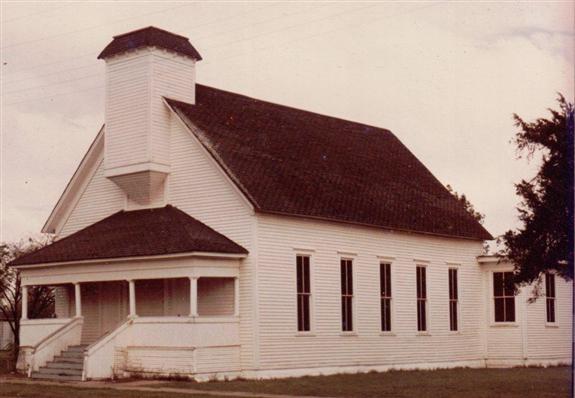