The following is from the Honey-Grove Signal Citizen, January 30, 1997

In the years following Reconstruction in Texas, money and credit available to facilitate commerce and trade in Honey Grove was limited to currency in the hands of the public and credit extended by local dry-goods and grocery merchants. This practice, usually incidental to the mercantile business and commonly referred to as “merchant-banking”, eventually led two of Honey Grovel businessmen to open a "private banking house" in 1877 called A. G Stobaugh and Company. Mr. Stobaugh and his brother-in-law. T. U. Cole, operated this banking enterprise hiring Mr. R. J. Thomas in 1879,  In 1881 Mr. Cole left the company to continue his pursuit of a career in banking with the Merchants and Planters National Bank in Sherman, Texas which was chartered September 28, 1872. Mr. Stobaugh and Mr. Thomas continued their business while another “private banking house" was opened for business in Honey Grove. Mr. W. D. Wilkins, operating a general merchandise and fancy goods store, began W. D. Wilkins and Company. Private banking houses were not required by law to publicize their financial statements therefore little is known of these early banking enterprises.

In the year 1882 Mr. A. G. Stobaugh died leaving his private banking house in the care of Mr. Thomas. Mr. Cole returned from Sherman and joined Mr. Thomas in assuming the business.

The Honey Grove Banking Association members accumulated the $50,000 required capital funds and having complied with all the provisions of the Revised Statues of the United States was granted a 20 year charter certifying the authority to conduct business as a national bank commencing January 29, 1883, by the comptroller of the currency in Washington. D.C.: John Jay Knox. First National Bank of Honey Grove was in business.

First National Bank of Honey Grove, Texas, was originally housed in the B. O. Walcott building on the southeast comer of Fifth and Market Streets. In 1884, Mr. Young Burgher served as president of the bank and directed the business successfully through the depression of 1884 without any loss to the capital funds of the bank now totaling $75,000. In 1888 Mr. C. W. T. Weldon was president; Mr. T. U. Cole served as Cashier and Mr. R. J. Thomas served as Assistant Cashier. In 1889 Mr. R. J. Thomas left First National Bank to assume duties as cashier of a new local bank, Planters National Bank, located on the northwest comer of the town square and Sixth Street.

Requiring a larger banking house in which to transact the growing commerce of Honey Grove, First National Bank of Honey Grove negotiated the purchase of Lot 7, Block 24 of the original plat of the town of Honey Grove, from Mr. and Mrs. J. C. Rutherford on December 13, 1890. This lot, located across Fifth Street on the southwest comer of Fifth and Market Streets became the focus as the future home of the bank.

In 1891 Captain Washington Underwood, serving as president of the bank, negotiated a contract with the J. B. Legg Architectural Company to design the 3-story building required by the banking corporation and commissioned Jacob Fein to build the stone and brick building which would serve as the bank’s new home. Construction began in the spring of 1891.

On August 14, 1905, the state legislature of Texas approved a bill authorizing the secretary of state to issue state bank certificates to applicants meeting requirements including a capital reserve in the amount of $10,000 to $100,000, depending upon the population of the town in which the bank was to locate. First National Bank of Honey Grove elected to remain certified as a national bank having renewed its national certificate on January 24, 1903 and realizing the public trust vested in the national banking system over the public trust of any state banking system. The financial panic of 1907 reinforced the perception of trust in the national banking system as banks all across the nation came to the aid of failing large money center banks desperately needing assistance. Although national banks were perceived as safer, no depositor lost any money in a state hank during this panic.

With the passage of the Federal Reserve Act in December, 1913, many state banks surrendered their state charters to become national banks to benefit from the provisions of the Act regarding national banks. On December 14, 1914, First State Bank of Honey Grove converted its certificate issued by the secretary of state for state bank authority to a national bank certificate and became State National Bank. This conversion was designed to place the bank in a more competitive position with the two competing national banks in Honey Grove.

First National Bank of Honey Grove, receiving a 99 year certificate from the comptroller of the currency on October 12, 1922, enjoyed the company of other businesses in its three-story office building. The second floor of the building housed the Long Distance Telephone Service until 1911. Offices of doctors, lawyers, dentists and chiropractors were located on the second floor and the third floor housed the Masonic Lodge No. 164 which sold their third floor interest to Blocker and Miller cotton merchants in 1914. The building became known as the “First National Bank Building”.

On May 16, 1966 First National Bank in Honey Grove increased its Capital Reserve fund to $100,000 from $50,000 and proceeded to seek state certification for there were operating advantages at this time for state banks over national banks with reference to lending practices and reserve requirements. With total resources of $3,381,000 First National Bank in Honey Grove, Texas converted to become First State Bank, Honey Grove, Texas on October 24, 1966.

On December 23, 1970, First State Bank, Honey Grove, Texas, negotiated the purchase of Lot #7, Block 24 on which was situated at one time the Clark and Neblett Harness Shop. The bank immediately remodeled the shop building and expanded operations into the building adding other convenient features for service to its customers. 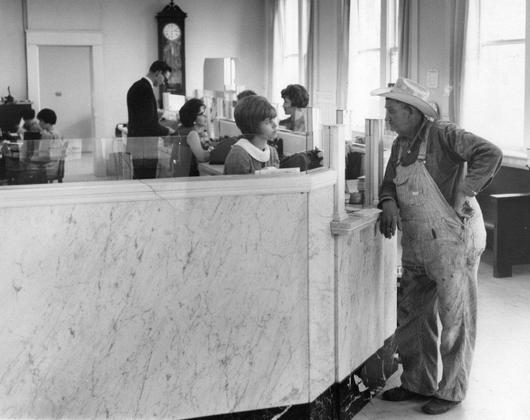 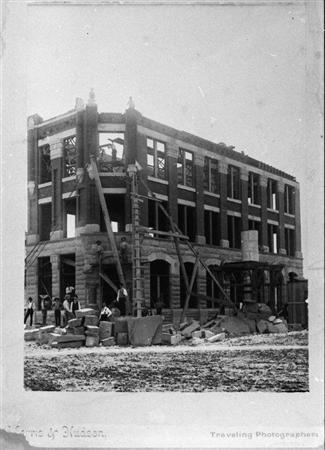 The First National Bank was organized by W. Underwood, M. A. Galbraith and others in 1883.

A. G. Stobaugh born October 10, 1834 came to Honey Grove about 1859.  His first work was in the merchandise business with his brother-in-law, T. U. Cole, whose store was on the northside of the square.

In 1881 our square was too small so it was moved a block south, where it is today 1985.  Mr. George Dailey a long time business man here, and Mr. J. B. McKee another pioneer business man, each built a red brick building on the east end of the block - 5th and Market Street, Mr. Dailey was drugs, book and other items.  Mr. McKee, a large merchandise store.  On the West end two stone buildings were erected - one by Capt. Underwood, one by B. O. Walcott.  They were made from the stone from the Floyd quarry.

In 1891 they needed more space so they bought the corner of south 5th and Market, and in 1892 Mr. Jacob Fein built the 3 story building that stands today - 1984 at the same location.  It has of course over the years been remodeled.  Mr. [portion of clipping missing]  other business houses and homes, that are monuments to that fact.  The stone that this building is made of has no time limit of endurance.  Some of the business buildings are more than 100 years of age already (1984).  There are 3 I know of - The Library, Dr. Marcom's front part of the building and where our picture show used to be.  Someday I hope to trace down all of these.

Next I have 1899 - President First National - Capt. Wash Underwood, B. O. Walcott - Vice president, T. U. Cole, Cashier and general manager.  In 1930, the "First National Bank" was purchased by the "Republic National Bank" of Dallas and in 1937 it was in September sold to the P. Norris family of Ada, Oklahoma.  The Norris family kept the "First National" of Honey Grove till 1966 then they sold it to Robert Howard and others.  Mr. Howard and others changed it to "The First State Bank" of Honey Grove.  And today 1985 the Honey Grove "First State Bank" is under the watchful eye of a nice young gentleman, whose name is Mr. Bill Russell.

Photo from the Collection of Mary Ann Thurman. 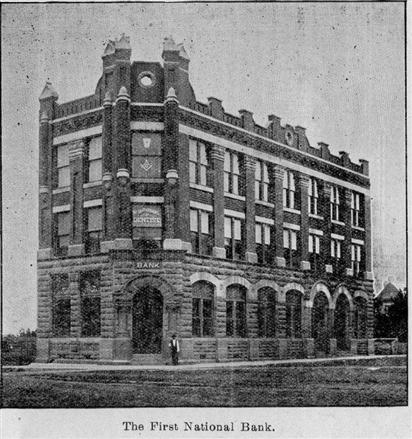