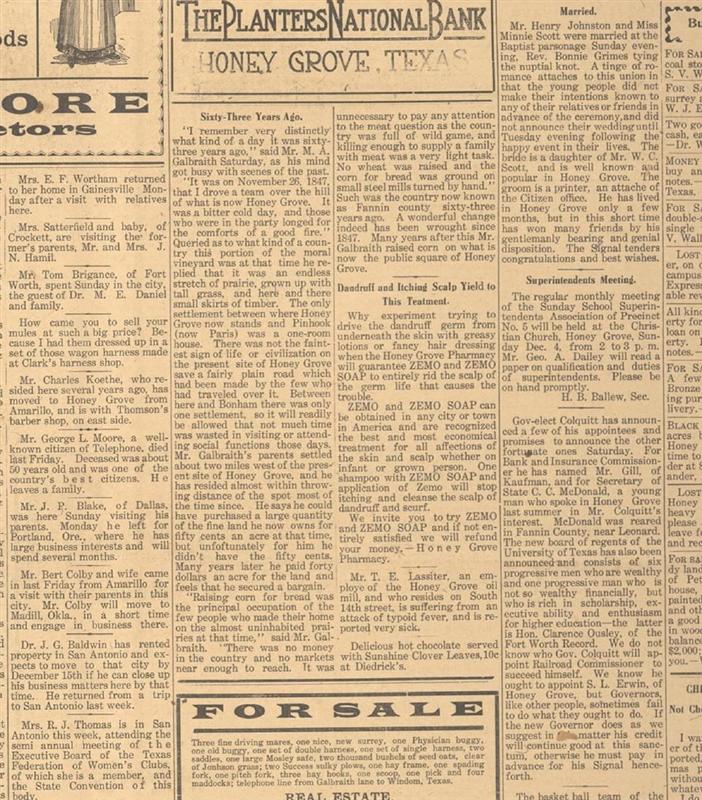 M. A. Galbraith Looks Back 63 Years

"I remember very distinctly what kind of a day it was sixty-three years ago," said Mr. M. A. Galbraith, as his mind got busy with scenes of the past.

"It was on November 26, 1847, that I drove a team over the hill of what is now Honey Grove.  It was a bitter cold day, and those who were in the party longed for the comforts of a good fire."  Queried as to what kind of a country this portion of the moral vineyard was at that time he replied that it was an endless stretch of prairie, grown up with tall grass, and here and there small skirts of timber.  The only settlement between where Honey Grove now stands and Pinhook (now Paris) was a one-room house.  There was not the faintest sign of life or civilization on the present site of Honey Grove save a fairly plain road which had been made by the few who had traveled over it.  Between here and Bonham there was only one settlement, so it will readily be allowed that not much time was wasted in visiting or attending social functions those days.  Mr. Galbraith's parents settled about two miles west of the present site of Honey Grove, and he has resided almost within throwing distance of the spot more of the time since.  He says he could have purchased a large quantity of the fine land he now owns for fifty cents an acre at that time, but unfortunately for him he didn't have the fifty cents.  Many years later he paid forty dollars an acre for the land and feels that he secured a bargain.

"Raising corn for bread was the principal occupation of the few people who made their home on the almost uninhabited prairie at the time," said Mr. Galbraith.  "There was no money in the country and no markets near enough to reach. It was unnecessary to pay any attention to the meat question as the country was full of wild game, and killing enough to supply a family with meat was a very light task.  No wheat was raised and the corn for bread was ground on small steel mills turned by hand."  Such was the country now know as Fannin county sixty-three years ago.  A wonderful change indeed has been wrought since 1847.  Many years after this Mr. Galbraith raised corn on what is now the public square of Honey Grove.