Grace Campbell is ninety-four years of age.  As one of the elder citizens of our town she has a vast knowledge of the town's history. However, unlike many older folk, she does not dwell on the past. She does not live in the past. It is important to be a part of today and she is a part of 1988. Still, she willingly shared some memories of the past just last week.

“The first Signal-Citizen office was upstairs over The Flower Market,” said Mrs. Campbell.

And the building where The Flower Market stood was the post office, Mrs. Campbell remembers. There was also a dentist office and a jewelry store and watch repair shop in that block.

She remembers well when the present post office was built for her father was the man who got the appropriation for the new post office. Her father, the late J. H. Lowry, was on the Board of Regents at Texas Women's University in Denton. He admired Denton’s post office and when the one in Honey Grove was built it was patterened after that one.

“They even chose the same color of brick the Denton post office had,” Mrs. Campbell said.

As a young girl Mrs. Campbell worked at the newspaper when her father was editor and publisher. I asked if she got the ink in her blood and she replied, “No, but I sure got it on my hands.” She explained that she mostly helped with the mailing and she collected bills. She worked at the newspaper even after she married and then spent less time there when she and her husband started their family.

Mrs. Campbell was born in Honey Grove. She married C. M. Campbell. Her husband worked at Black & Little Drug Store. He also operated a confectionary business, but the Depression forced him to close that business. During the war he carried a mail route in Honey Grove.

Did you know that many years ago the mail was delivered twice daily? That is just another of the many things Mrs. Campbell remembers about days of long ago in Honey Grove. She recalled that her husband carried the mail route out on west hill.

“He walked that route twice each day,” said Mrs. Campbell.

When the war ended and the postal employees came back to Honey Grove they got their jobs back and so Mrs. Campbell’s husband had to give up the route. He did a lot of painting jobs after that and she remembers he once painted the dome on the Methodist Church. It was a dangerous job.

The old photos in the library show the square with all the wagons about and throngs of people in downtown Honey Grove. Mrs. Campbell remembers when the square looked that way.

“Cotton buyers came to Honey Grove from England,’’ she recalled.

According to Mrs. Campbell those cotton buyers from England often rented rooms from the Thompsons, her mother’s family. She said everyone was so curious about the England visitors and loved to hear them talk. She also recollected a big event in that day was when a carnival came to town.

Boarding houses were common in that day and Mrs. Campbell said the house where the Rainwaters live now at 800 East Main was owned by Mr. John Jones.

“His sister, Miss Ella Jones, was an excellent cook and she served the most delicious meals,’’ said Mrs. Campbell. “She would serve these great big chickens, but they were so tender. She fixed the best fried chicken in the world. It was a real treat: to eat her cooking.”

Mrs. Campbell lives today in the house where she has lived since she was thirteen. If the walls of that house at 605 East Main could speak they might tell of the speeches J. H. Lowry made. He was an orator and she remembers when she was a young girl that Mr. Lowry allowed young men from high school to come to the house and he would instruct them and help them as they prepared their speeches for debate.

She has many wonderful memories of her father who was one of the greatest newspapermen of his day. He gained fame throughout the state for his unique style of writing. He served as President of the Texas Press Association at one time. He was a charter member of the First Christian Church in Honey Grove. She remembers him walking to work and she remembers him as a very tender-hearted man.

Many times through the years people have called at her home seeking information about her father who was so well known. This man was truly a legend in his time and legends should not be allowed to fade away. She has shared memories of her father with many through the years and so his memory lives on. It just doesn’t seem right that such a pioneer of the newspaper world would be forgotten and so yet another article will be published about the late J. H. Lowrey. It has been about fifteen years since the Signal-Citizen has printed such an article. Lest we forget him, it shall be done again.

In a memoria that was written following the death of J. H. (Jim) Lowry it was said of him: “His unaffected manner and kindly greetings were sincere and won friends easily. Jim Lowry was magnanimous to a fault and wholy unselfish. He wanted to help others, to give them the best he had. He did his work well and left the world better than he found it.”

Oh, if only such nice things could be said of us when our life’s journey is over! This man set a good example for his daughter and such nice things can be said of Jim Lowry’s daughter. Grace and her husband had two daughters only fourteen months apart. The eldest was Frances Louise. Tragically her life ended when She was killed in an automobile accident at the age of nineteen. Their other daughter is Mrs. Robert Shelton Jr.  Named for her grandfather, Jim Shelton is loved by many in this town. She and Robert have three daughters, Peggy, Nancy and Kathy. Mrs. Campbell loves those granddaughters so very much and there are four great-grandchildren for her to love also.

Still in fairly good health Mrs. Campbell looks forward to the daily visits with her daughter who brings her lunch each day. She enjoys game shows on television and wishes her eyesight would permit her to do more reading. She enjoys having good neighbors and through the years has acquired an abundance of friends in this town. Those friends are just one of the many reasons she loves the town where she was born and has lived all her life. How fortunate she is to be able to recall wonderful memories of the past and still be able to share bits of history of Honey Grove with others! 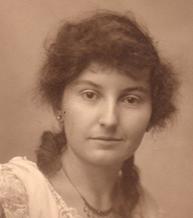 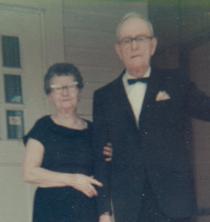