This photo shows the Evans Grocery store that was on the northeast corner of the square. The photo was taken in the 1930's. S. B. Evans started the business. After his death, his son and wife, Lon B. and Lottie Belle Evans ran the business. It closed in 1962 following the death of Lon B.

Lon B. was the father of Mary Anne Thurman, and S. B. was her grandfather. She remembers tales of flour and other goods coming by the train carload. One year the whole front window display was filled with peppermint candy at Christmas.

A lot of the business was credit business. Many farmers charged their groceries all year and paid when their crops were harvested. In the 1940's and 1950's the store was kept open until after the midnight picture show was over so that customers could leave their meat there. There were mountains of feed in the back of the store and it afforded a fun place for children of customers to play. Many of the printed feed sacks came back to Lottie Belle Evans and dresses were made for Mary Anne. Eggs were taken in trade for groceries. There was an old asbestos backed stove in the middle of the store and many a farmer sought it out on a cold, rainy day and spent time shooting the breeze there! Groceries were also delivered to customers in town.

The building was originally the Planters National Bank. It went under in the 1920's and then there was a fire in the building. Mr. Evans purchased the damaged building and remodeled it for the grocery store. He lowered the floor to ground level and put in a second floor for storage. The original elevator is still in the building. It was one of the first elevators in town. 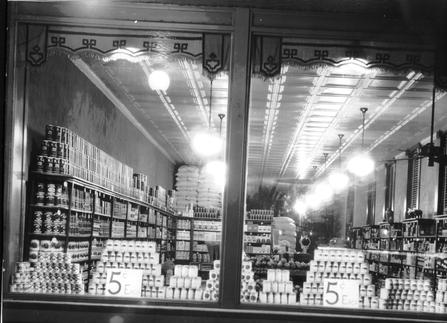 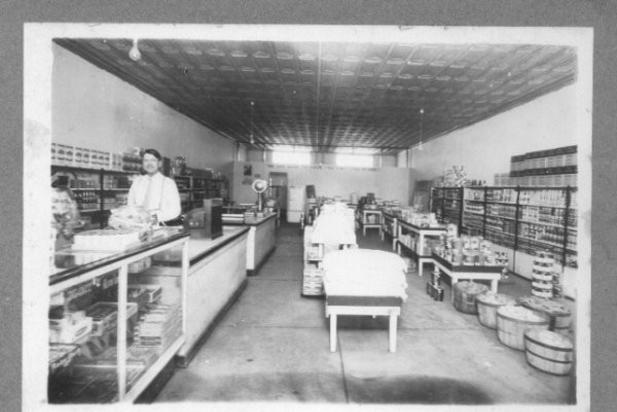 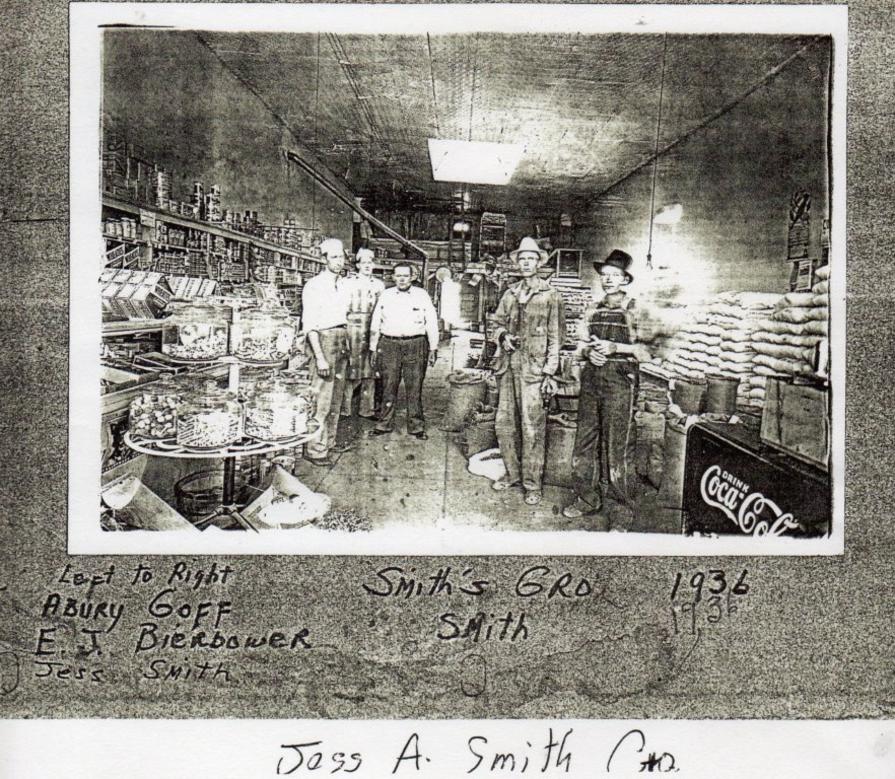 Those shown in the picture are:  (L to R) R. H. (Herbert) Gauldin, father of H. E. "Bub" Gauldin and Mariam Garner of Honey Grove; Dudley Scott, brother of the owner, Frank George, who worked for S. F. Graves on S. Sixth street in his combination Honey Grove Bottling Works and car dealership; O. J. Rutherford of Petty; Felix Rogers, clerk in the store and brother-in-law of the owner; Fred Monier, a growing lad of some 20 years of age who seems to be at least a foot taller than the others.  Fred lived and farmed just east of town; John McBee, who was a high school student at the time and also a part-time clerk for Mr. Scott; Dillon rogers, who was a local farmer; George Woods, who was farming east of town on Henry Dickson's land; and finally Will C. Scott, the owner of the store.  (Photo and information courtesy of Fred Monier of Petty). - John B. Black 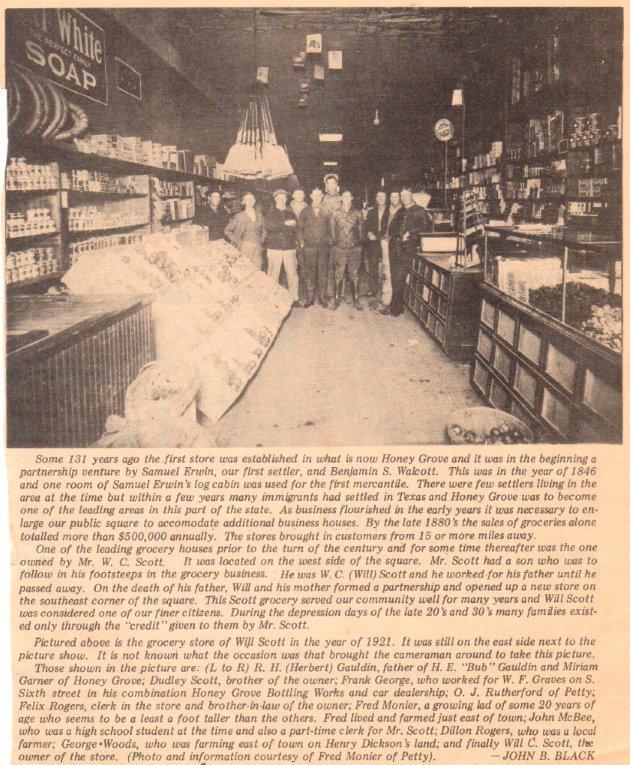 Some 131 years ago the first store was established in what is now Honey Grove and it was the beginning of a partnership venture by Samuel Erwin, our first settler, and Benjamin S. Walcott.  This was in the year of 1846 and one room of Samuel Erwin's log cabin was used for the first mercantile.  There were few settlers living in the area at the time but within a few years many immigrants had settled in Texas and Honey Grove was to become one of the leading areas in this part of the state.  As business flourished in the early years it was necessary to enlarge our public square to accommodate additional business houses.  By the late 1880's the sales of groceries alone totalled more than $500,000 annually.  The stores brought in customers from 15 or more miles away.

Picture above is the grocery store of Will Scott in the year of 1921.  It was still on the east side next to the picture show.  It is not known what the occasion was that brought the cameraman around to take this picture. 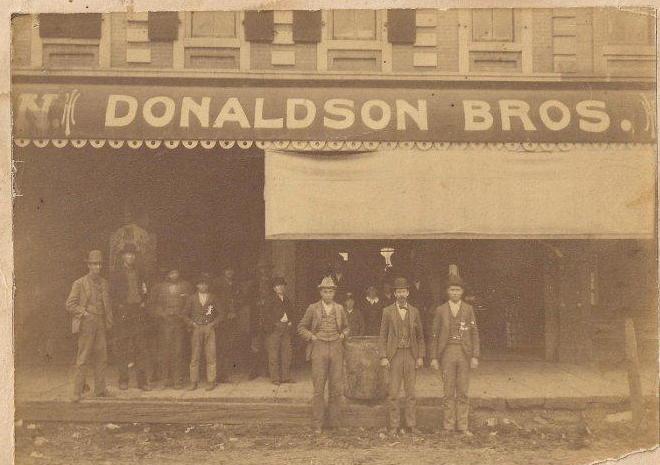 Photo of the front of the Donaldson Bros. grocery store from the Collection of Ruth Ann Johnson. 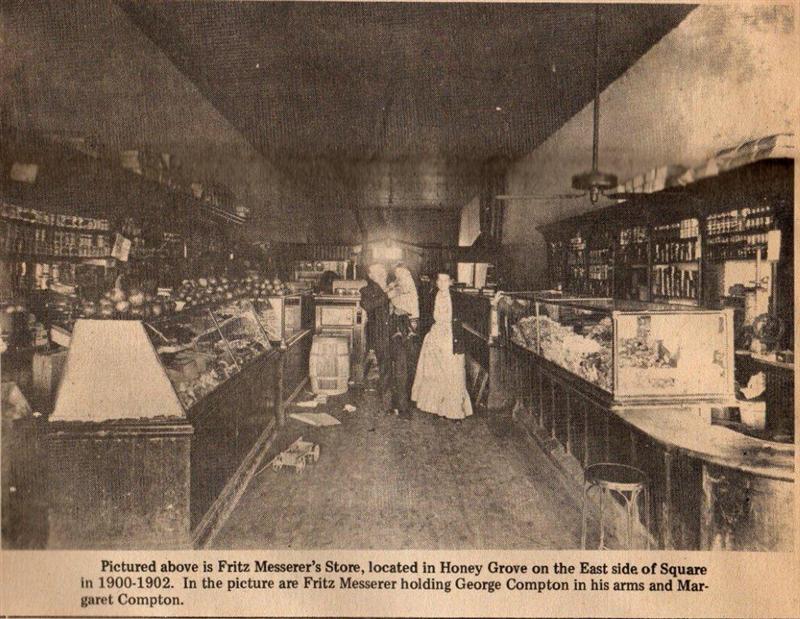 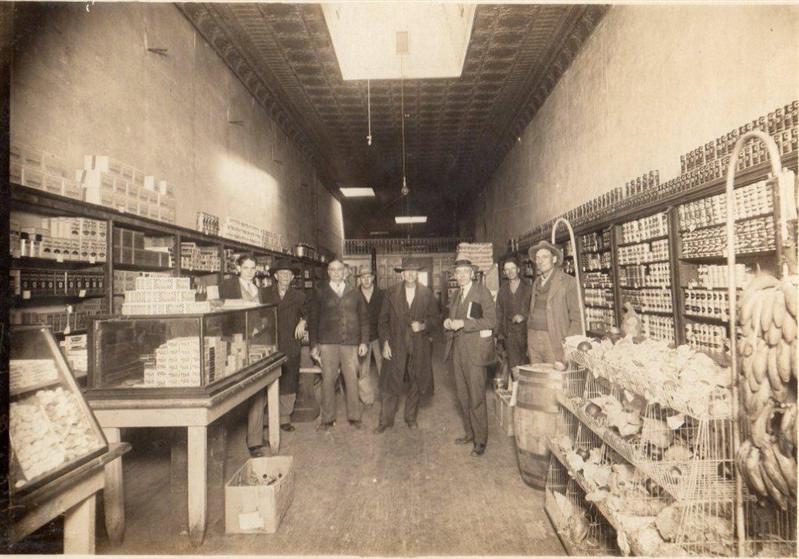 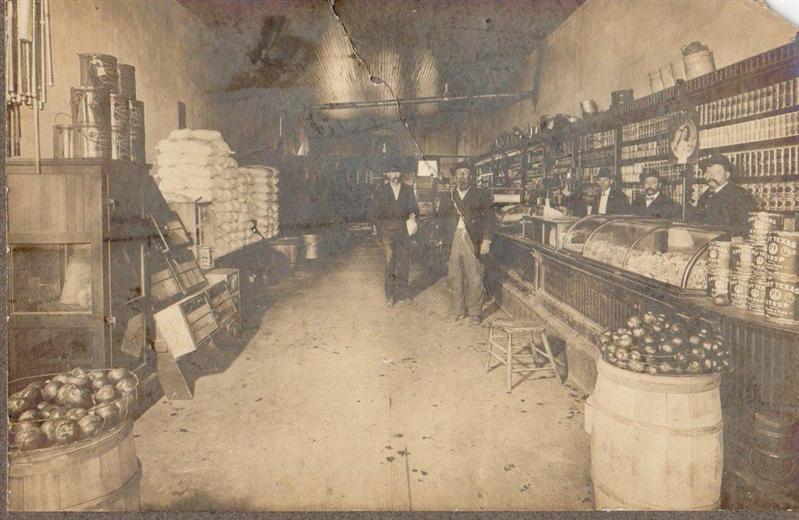 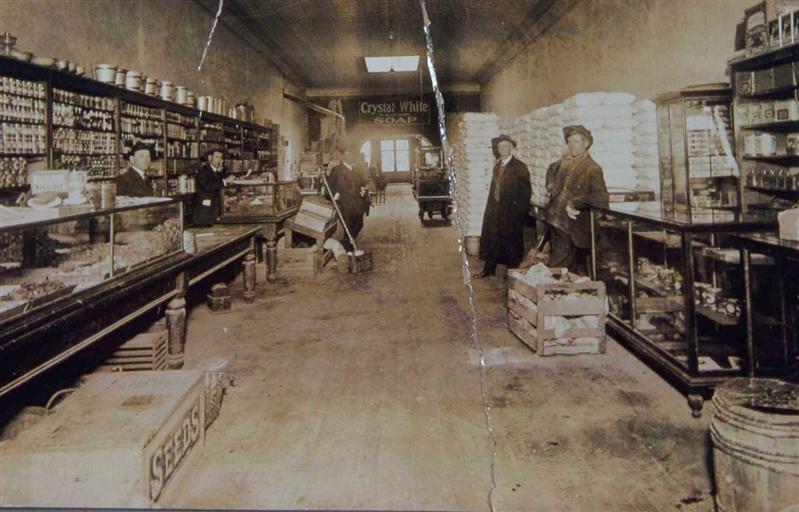