Throughout almost all of its long and interesting history, Honey Grove has been considered a leader in the social life of our area and particularly was this true in the decades following the Civil War. With the close of the war the town rapidly grew in size and wealth and by the mid-l800's had a population in excess of 4,000. With the growth in population came a spurt in home building and the crude log houses of the early settlers were soon to disappear. By the 1890's the families of considerable financial means vied with each other in the size and splendor of the homes they built for their growing families. These mansions that were constructed in nearly every part of the town often equalled or surpassed those of any other city in Texas and our community was justifiedly proud of them, as it is today. The families were often large and these lovely homes were usually filled with the laughter and gaiety of young voices. The vivacity of the youth and the splendor of the homes blended together to stimulate social gatherings and events that would be the envy of any debutante of our present day.

Out of this social climate emerged several groups of young ladies and young men as they formed social clubs in order to enhance the activities of the day. When formal parties were held the attire was almost always the best that families could afford and the fashions created by local seamstresses for the young ladies could not be surpassed anywhere. The men’s attire was usually just as fine although not as elegant. Favors for the parties were like as not ordered direct from St. Louis or New York and the most elegant refreshments that can be imagined were created by artisans in Dallas and sent in packed in ice, much to the delight of those gathered about the dining tables. Live music was often at hand and formal "Balls" were often given in one of the homes that had a third floor devoted exclusively to dancing.

Not to be outdone by the social life of the younger couples the town itself sponsored special events and parades several times a year. The Fourth of July parades became famous for the splendor of the floats and prizes were awarded for the best of them. Hundreds of hours of work went into the decorations for the parades.    - John Black, Honey Grove Signal-Citizen, January 28, 1977.

See the book Historic Homes, Buildings & Locations of Honey Grove, Texas published by the Friends of the Bertha Voyer Memorial Library in 2007.

See the booklet of the Heritage Home Tour of 1982, with many photos and much info. 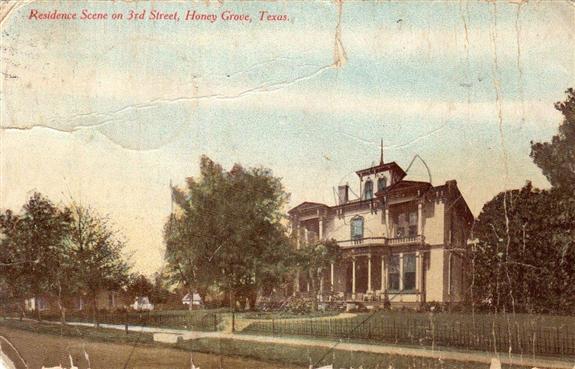 This home is just one example of the beautiful homes built in Honey Grove during the days when Cotton Was King.  See more examples by viewing the pages for the various streets.  Old postcard mailed in 1912 contributed by Ruby Grace Siebenthall.

Homes with No Known Address