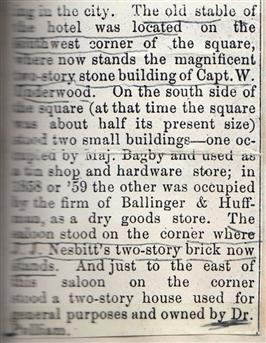 On the 15th day of November, 1857, we landed in the town of Honey Grove, after a hard day's pull through mud, at times up to the wagon's axles.  At that time there were three dry goods stores, one drug store, one saloon, one blacksmith shop, one tin shop, one union church and one school house.  The town then had a population of between two and three hundred.

The leading dry goods store was owned and run by B. S. Walcott, with Capt. W. Underwood as head salesman.

Mr. Walcott's store was situated on the northwest corner of the square (where now are a block of four two story stone buildings), facing South West Main street, and running back about 100 feet.  The next store of importance was S. Stapps (Uncle Sink as we called him), situated on the northeast corner of the square, where now stand the imposing two-story stone buildings of Mrs. J. B. Ryan, facing East Main and the square, running east 100 feet.  On the northeast corner of the square, where now stands the two-story brick building of the Planters national bank, was a one-story frame building occupied and run by Shaw & Titus, which in the following years was sold to Cole & Stobaugh, who did a flourishing business until nearly the close of the war.  Some twenty feet west stood a store in which was a small stock of family groceries and confectioneries, owned and controlled by our old fellowtownsman, Jno. B. Yeager.  Next t ohim on the west was a small building in which was the drug store of the city, owned and run by Baird & Ligon; the following year it was sold to Dr. W. E. Dailey.  On the west side of the square and on the south side stood the famous Smith Hotel; the proprietor and proprietress, Mr. and Mrs. Orville Smith, will live long in the memory and in the hearts of the many who gathered around at their hospitable board - three of their children are still living in the city.  The old stable of the hotel was located on the southwest corner of the square, there now stands the magnificent two-story stone building of Capt. W. Underwood.  On the south side of the square (at that time the square was about half its present side) stood two small buildings - one occupied by Maj. Bagby and used as a tin shop and hardware store; in 1958 or '59 the other was occupied by the firm of Ballinger & Huffman, as a dry goods store.  The saloon stood on the corner where J. J. Nesbitt's two-story brick now stands.  And just to the east of this saloon on the corner stood a two-story house used for general purposes and owned by Dr. Pulliam.

On the southwest corner of the present square (where now stands the two-story stone building of T. B. Yarbrough) at that time stood the one-story frame residences of Capt. Tom Shaw, and there their twin boys, Jim and George, were born, and where your humble servant boarded while he was serving an apprenticeship in the vocation which he has ever since followed.  The blacksmith shop on West Main street near where Dr. Bedford's beautiful residence now standards, was owned and run by our old and highly respected townsman, Co. J. P. Woodson.  In the southwest part of the city which is now built up with beautiful residences, was a large field which cornered where now stands one of the most imposing buildings in Northern Texas - the three-story brick and stone building owned by the First National Bank.

Such was Honey Grove in 1857.  Considering size, perhaps there is not another town in the State that this better built up.  There are twenty-six stone and seventeen brick business houses, a number of residences costing from $3,000 to $10,000, and not better society can be found in nor out of the state.

The deer which we have seen in large droves and which were chased through the square in '57, are like the Indians who once roamed the broad prairies at large, "among the things that were."

The prairie chicken which we have shot off the roofs of the store buildings are no only to [be] found in some distant field.

The happy hunting ground of the Indians and earlier settlers, is forever destroyed by the mighty influx of immigration.  Then the huntsman's horn or the crack of the rifle was music to our ears; now we hear the whistle of the various steam industries or the still louder toned whistle of locomotives over the Texas and Pacific or the Santa Fe railroad as they rush to and from loaded with the products of our rich country. 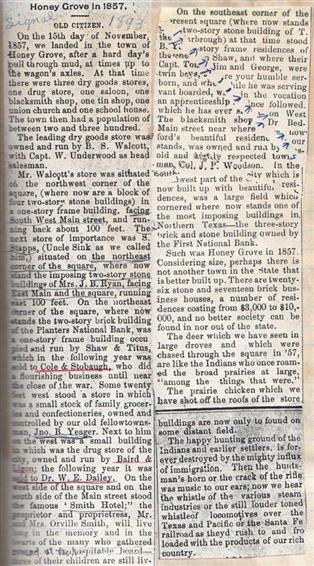