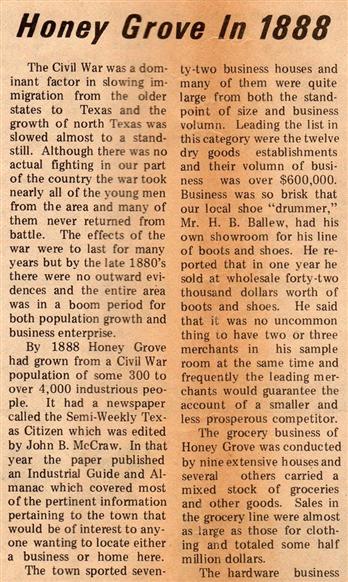 ​The Civil War was a dominant factor in slowing immigration from the older states to Texas and the growth of north Texas was slowed almost to a standstill.  Although there was no actual fighting in our part of the country the war took nearly all of the young men from the area and many of them never returned from battle.  The effects of the war were to last for many years but by the late 1880's there were no outward evidences and the entire area was in a boom period for both population growth and business enterprise.

In 1888 Honey Grove had grown from a Civil War population of some 300 to over 4,000 industrious people.  It had a newspaper called the Semi-Weekly Texas Citizen which was edited by John B. McCraw.  In that year the paper published an Industrial Guide and Almanac which covered most of the pertinent information pertaining to the town that would be of interest to anyone wanting to locate either a business or home here.

The town sported seventy-two business houses and many of them were quite large from both the standpoint of size and business volumn.  Leading the list in this category were the twelve dry goods establishments and their volumn of business was over $600,000.  Business was so brisk that our local show "drummer,", Mr. H. B. Ballew, had his own showroom for his line of boots and shoes.  The reported that in one year he sold at wholesale forty-two thousand dollars worth of boots and shoes.  He said that it was no uncommon thing to have two or three merchants in his sample room at the same time and frequently the leading merchants  would guarantee the account of a smaller and less prosperous competitor.

The grocery business of Honey Grove was conducted by nine extensive houses and several others carried a mixed stock of groceries and other goods.  Sales in the grocery line were almost as large as those for clothing and totaled some half million dollars.

​The hardware business of the town was conducted by four large exclusive business houses on the public square.  Their combined sales were close to $150,000 annually.  Included in those sales were the sales for wagons and buggies as most of them were dealers for leading manufacturers.  The S. L. Erwin company also handled gin machinery for the two cotton gins that operated during the fall and winter months.

In 1888 Honey Grove sported two railroads, two banks, seven churches, four large frame hotels which were almost always full, two lumber yards and was well supplied with restaurants and boarding houses for both the unwed and the itenerant.  There was a steam-powered planing mill which was doing a thriving trade supplying the local lumber yards and they also did a large export business in walnut and cedar lumber.

There were three business houses making leather products and these employed several men.  Most of their work was devoted to making saddles and harness and their craftsmen were skilled artisans that hand made products ranging from the commonest of farm harness and gear to the finest of carriage harnesses which were mounted with gold and silver.

Honey Grove was known far and wide for the black-land mud that clung to everything during rainy weather.  In its earlier years the citizens had to put up with this sticky mud as best they could, but by 1888 the business houses had stone sidewalks and throughout the town were many miles of "Plank" sidewalks going to nearly every home.  It was some 20 years later before these were replaced with concrete walks.

Honey Grove was indeed fortunate in having an excellent school which could accomodate several hundred students.  The school was a large two story brick building which had been built at 1875 at a cost of $10,730.  The Reverent J. C. Parks was the first Principal and he was succeeded by Rev. Isaac W. Clark, A. M. who was still at the head of the school in 1889 and possibly continued for some time after that.  In 1888 the faculty consist of the Rev. Clark, Mrs. Laura Stobaugh, W. H. Lemons, L. A. Smith and Mrs. May Clark.  According to the report card of Miss Ora Compton for that year the subjects taught at the school were Punctuality, Deportment, Arithmetic, Mental Arithmetic, Geography, Grammer, Reading, Writing, Physiology, Physics, Rhetoric, United States History, Geometry, Trigonometry, Latin, German, English Literature, English Composition, Orthography, Algebra and History of Texas.  For the month ending October 26, 1888 Miss Compton had a grade average of 97 5/6 on a scale of 100.