We children were standing with our Papa, Bela (pronounced Beely), in front of our home at 1005 East Elm Street watching the ghostly sight of the Klan as they passed the Doolin's pasture and next the Chandler's place, and next was Ira Bryant's home on the corner of 14th and Elm Street.  We were holding on to our papa's waist for dear life, because we knew our papa would not let the "ol boogerman" get us.  When the riders reach Elm Street the horses started slowing down, kilppity, klop, klop!

When Bela saw the leader of the Klan turn east on Elm street and head our way, he knew then that he was the Ku Klux Klan's intended victim.  Bela was buying and selling whiskey that did not have a federal tax stamped on the bottle.  This was bootlegging in its highest order, and the Klan would not stand for such disregard for the law in Honey Grove.

Immediately, papa grabbed us children and said, "y'all git back on th' gallery, hurry!"  He went inside and a moment later came out of the house with a big .45 Colt six-shooter pistol and stopped on the edge of the yard.  There was one thing that the Ku Klux Klan failed to take into consideration about their intended victim:  My Papa was not going to back down to any man, expecially not the sort of man who had to ride in a pack and keep his face hidden.

The leader of the Klan started riding his horse to and fro across the street in front of the other riders, bringing them to a halt in front of our house.  Bela stood motionless, his eyes trained on the sheeted riders, every muscle in his body ready to react.  When the Klan leader whirled his good horse to a halt in front of Bela, what he saw put the fear of God in him.  Paper was holding the pistol at his waist and he was pointing it right at the fat man's belly.

Now this was a group of smart men in the Klan.  They did not come here on a load of "pumkins".  They were smart enough to know that the instant one of them threw his leg over the cantle of his saddle to dismount he would be a dead man before he hit the ground.  Bela thought that he could get at least four of the Klansmen with his six shooter before they could shoot him down.

​No one in the group wanted to take that chance.  With a curse, the fat man jerked his horse away from the yard and started waving his arm and hollering, "Come on, let's go!"  The Klan headed south across Ira Bryant's cotton patch and took a cowtrail leading to Kickskillet where Henry Cinch lived.  Henry was Bela's black friend and delivery boy who would carry whiskey to the customer with the understanding, "No money no whiskey."  There were several riding in the parade that did not like this setup, and they were determined that if they couldn't get to Bela, they would have their mark in another way.

​The Ku Klux Klan surrounded Henry Chinch's cabin and while the terrified little family watched, the Klan horse-whipped their papa like a wild animal.  The next morning, Saturday rolled around for a pretty day.  This was not a legal holiday, but the people living in the country worked hard all week, following a team of mules, plowing and planting their crops.  This was the day the people around Honey Grove would bring their butter and eggs to town to sell them.  Some came to buy staple groceries, some came to just shop around, others came merely to walk the square.

Bela also went into town on that particular Saturday.  He drove his buggy into the square and stopped in front of the grocery store where the leader of the Klan was working.  Bela got out of his buggy with the heavy pistol in his hand hanging down by his side.  When the fat man raised up Bela hit him on the side of the head with the heavy gun, knocking him sprawling on the floor with the beans.  The fat man hoolloed, "Don't shoot, don't shoot"!  With a voice as cold as steel Bela said, "Git up off'n that flo' and you git thet grocery hack loaded wif' groceries and you drive thet hoss you'sef and take it to Henry Chinch's house, and you can wipe that' blood offs you face when you git back - now get"!!

Many years have passed since the "ol buggerman" came to our house, but that hidden fear still takes hold of the body when I hear of these men who live with such hate in their hearts.  It is a shame that there aren't more men like Bela in this world who are brave enough and compassionate enough to take a stand.  To my knowledge, the Klan never rode again in Honey Grove. 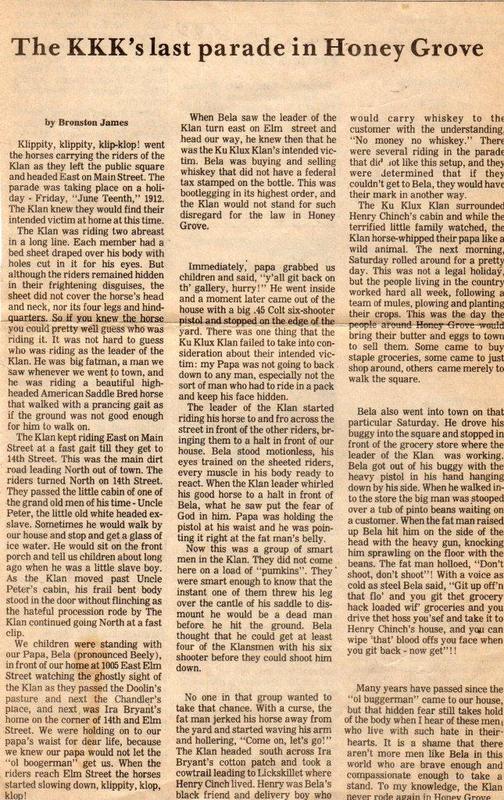 Klippity, klippiry, klip-klop! went the horses carrying the riders of the Klan as they left the public square and headed East on Main Street.  The parade was taking place on a holiday - Friday, "June Teenth," 1912.  The Klan knew they would find their intended victim at home at this time.

The Klan was riding two abreast in a long line.  Each member had a bed sheet draped over his body with holes cut in it for his eyes.  But although the riders remained hidden in their frightening disguises, the sheet did not cover the horse's head and neck, nor its four legs and hindquarters.  So if you knew the horse you could pretty well guess who was riding it.  It was not hard to guess who was riding as the leader of the Klan.  He was a big fatman, a man we saw whenever we went to town, and he was riding a beautiful high-headed American Saddle Bred horse that walked with a prancing gait as if the ground was not good enough for him to walk on.

​The Klan kept riding East on Main Street at a fast gait till they get to 14th Street.  This was the main dirt road leading North out of town.  The riders turned North on 14th Street.  They passed the little cabin of one of the grand old men of his time - Uncle Peter, the little old white headed ex-slave.  Sometimes he would walk by our house and stop and get a glass of ice water.  He would sit on the front porch and tell us children about long ago when he was a little slave boy.  As the Klan moved past Uncle Peter's cabin, his frail bent body stood in the door without flinching as the hateful procession rode by The Klan continued going North at a fast clip.