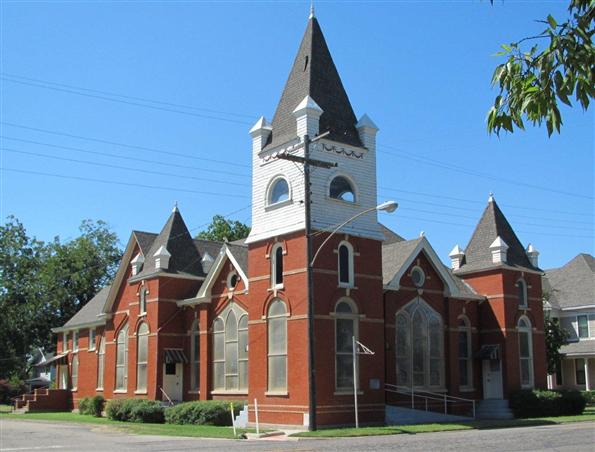 The Main Street Presbyterian Church was tragically destroyed by fire on the early morning of February 10, 2013. The application for a historical marker for the church had been approved by the Texas State Historical Commission only weeks before the fire. Below is the text of the historical marker application.

The history of the Cumberland Presbyterian Church is HERE.

The history of the First Presbyterian Church is HERE.

The history of the Rock Point Presbyterian Church is HERE.

The Session Minutes of the Rock Point Presbyterian Church is HERE.

See a 1912 Directory of the Main Street Presbyterian Church HERE.

Submittal for an Historical Marker

Honey Grove History. The first Anglo settlers entered what is now Fannin County around 1836. Hunters and travelers such as Davy Crockett visited the area now called Honey Grove around that time, but the first settler in Honey Grove was Samuel Erwin, who built a cabin in what became Honey Grove in 1842. After that time settlers came in increasing numbers, and the town of Honey Grove was laid out in 1848. In 1855 land for a church was purchased by representatives of four congregations.

Although the early records of the Cumberland Presbyterian Church have not survived, records beginning in 1866 detail the activities of the Church, and record that in February 1858 the church was organized with Rev. R. M. Rudolph as its minister and with S. Sloan and Orville Smith as elders.

In November 1881 the Cumberland church began looking for a site to build a home of its own and in December 1881 it was agreed to purchase a lot east of the public square on Main Street. Before the new church could be built the congregation moved out of the Union Church building and worshiped in the school building owned by Professor J. S. Kendall. The Cumberland Presbyterian church sold its share of the Union Church to the Baptists in 1883.

The new 26’ x 52’ church was begun in 1883 and was built according to the plan and specifications by Joseph Scott, Architect and was completed on April 1, 1884 by J.S. and J.B. Boone, contractors. The new church, which is the north section of the current sanctuary, was completed in April 1884 with furnishings, including pews and furniture, at a total cost of $1,816.00 and dedicated on May 11, 1884. “A large audience assembled at an early hour in the Cumberland Presbyterian Church to witness the dedicatory service.”

In 1889 the church purchased the property south of the church lot from G. F. J. Stephens.

In 1902 the church was “very greatly enlarged and beautified to meet the needs of the growing congregation.”

A March 1879 report stated that the church had 35 members.

On December 19, 1880, the First Presbyterian congregation decided to build its own church on the southeast corner of Eighth and Pecan Streets. A frame 26’ x 40’ frame building was constructed for a cost of around $1,000. The sanctuary had a seating capacity of 200.

In 1905 there were 91 members of the church. In 1905 the Session voted to establish a Westminister League for the young people of the church. A 1908 report lists Sunday School teachers for 1st-7th grades.

In 1909 the church was enlarged and beautified.

In 1911 a veneer of brick was put on the Main Street Presbyterian Church, with a concrete foundation and stone trimmings. At the same time the interior was refinished and beautified.

In April 1912 a Committee was appointed to confer with Mr. Peters, Architect, as to the practicability of attaching the First Church building to the Main Street building. During 1912 a portion of the First Presbyterian building was moved to the south end of the Main Street building to form what is today the Fellowship Hall. (The second portion (28 feet) was sold for $250 to the Christian Church to be added to its building. ) The Cumberland building undertook a complete makeover including the stain glass windows and brick veneer being added to the building. In 1917 the combined church had a membership of 246.

The Main Street Church Building. Main Street has been blessed with beautiful, large stain glass windows throughout the building which have been repaired and protected. Two large windows in the Fellowship Hall, the Hill and Petty windows, are from the original First Presbyterian Church building. Windows in the main portion of the sanctuary were given in memory of honor of various teachers and church leaders. One was purchased by the Woman’s Missionary Society. In all, the building contains 36 stained glass windows.

A second outstanding feature of the church building is the pipe organ. This organ was purchased from Moler Pipe Organ Co. of Chicago, Illinois in 1913 in part with the proceeds of the sale of the First Presbyterian Church’s manse to L. W. Trout. The organ was repaired and restored by the Eberhardt Co. at a cost of $30,000 and first played by Art and Miriam Eberhardt on March 29, 1992. Rededication of the organ was held on May 17, 1992.

Current Activities. Main Street participates with other Honey Grove churches in the Greater Honey Grove Ministerial Alliance including 5th Sunday singings and annual community Thanksgiving services. Through the area churches, Main Street has contributed in both time and money toward assisting those in need in Honey Grove and those passing through the community. It has for over 50 years joined with the First Christian Church and McKenzie Methodist in Honey Grove in holding joint Vacation Bible School programs each summer. A member of Grace Presbytery, the local church also contributes to projects of the greater church body.

III. Significance. The Main Street Presbyterian Church and the other Presbyterian churches which have combined with Main Street have provided services to their congregations and their communities since the beginning of settlement in Fannin County.

Although there are a number of historical markers in Honey Grove, only one is on Main Street, and that one, for Crockett Park, is on the west side of town.