A Lodge of Master Masons was opened in due form and ancient form, after which the bylaws and the charter were read.

A motion was thus made to go into the election of the officers of the Lodge which was rejected and on motion the Lodge was closed in ancient form and harmony.

[Petitions for initiation signed by S. S. McCleary and W. Underwood were read.  Committees were appointed]

[There was discussion on the question of moving the Lodge: "which would the Lodge prefer, the Schoolhouse belonging to Mr. Walcott at $25. or this room at $50 per annum."  The Lodge decided in favor of the School house.  A committee was appointed to make a contract with Mr. Walcott for rent of the school house for the remained of the year, and failing that, to contract with Mr. Smith [Orville Smith, owner of the Smith Hotel] for the current room.]

[The Committee appointed to contract with Mr. Walcott for the use of the school house reported that they had not fully contracted with him.]

[The Committee of Inquiry reported favorably on the petitions of S. S. McCleary and W. Underwood for membership, and they were elected.]

[A committee was appointed to confer with the subscribers of a contemplated building for a schoolhouse concerning the propriety of erecting a hall on it for a lodge room and to raise a subscription for that purpose.  A committee of Nicholson, Coulter and Baird were appointed to contract with Mr. Smith for the rent of this room.  Petitions for initiation were received from Mr. B. M. Orton, O. Smith and W. W. Richards.

[The object of the meeting was to inter Mr. E. E. Jones who petitioned for initiation in July 1855 and who has given a satisfactory reasons for not presenting himself sooner.  Mr. Jones was admitted.]

[The committees on the petitions of W. M. Orton, Orville Smith and W. W. Richards were read.  Mr. Orton, Mr. Smith and Mr. Richards were elected.  A report from the Committee to confer with subscribers to school house was read.  A report was received to contract with O. Smith on the use of this room.]

[The purpose of the meeting was a series of lecture on the duties of Masons.]

[The applications of B. M. Orton, O. Smith, S. S. McClary, W. Underwood and S. A. Erwin to be passed to the degree of Fellow Drafts was recevied and were passed.  The petitions of Thos. Shaw, Gasham Cravens, S. H. Shipley, A. F. Merrill Sen. and A. F. Merrill Jr. praying to be initiated into the mysteries of Masonry were received.  The petitions of Jas. A. Cole and R. Pollard to be admitted members of the Lodge were received.]

[​The object of the meeting was to receive instruction in the three degrees, especially in the 3rd.]

[​​T. Shaw and L. W. David were examined and they were elected to the 2nd degree.  A committee was appointed to consider the propriety of, and arrange for a plan for the Temple to use this room, jointly, as a hall.  Twelve black balls were cast against J. W. Eastman.  John Hobbs was initiated.]

{D. Darby was elected.  L. W. David and T. Shaw were elected to the 3rd degree.  Officers were election:  J. W. Moore, Worshipful Master; A. G. Pace, Senior Warden; A. J. Nicholson, Junior Warden; J. B. Baird, Secretary; S. Stapp, Treasurer; Orville Smith, _____.  It was decided to hold a public installation of officers. with a house, music and speaker.  Orville Smith was to be paid $41.60 for rent of the Lodge room.  A Committee was appointed to draft resolutions in reference to building a school house to be under the control of the Lodge with a hall above for the Lodge room.]

​[The Lodge members partook of cakes provided by Sisters Stapp and Knightand an elegant dinner was prepared by Sister Smith.  A procession marked to the church where the newly elected officers were publicly installed.  Addresses were delivered by Bros. Vanoy & Rudolph.  Music was played on the violin.  The procession then marched back to the hall and had further refreshments.]

Resolved; that a house be built in the town of Honey Grove Fannin Co., Tex. under the auspices of this Lodge of Masons, the dimensions of which shall be 60 feet long inside 40 feet wide inside and two stories high to be laid off into rooms as the Building Committee may direct.

Resolved; that the walls of said building shall be made of stone and if practicable that the floors and the jambs of the doors and windows of the roms be mae of stone also.

Resolved: that the lot on which said building is erected with all its appartenances be forever held as the property of this Lodge of Masons.

Resolved: that this Lodge establish and keep up a male and female school in said edifice, provided that if, in the lapse of time it shall appear to be for the interest of the institution and the community the Lodge may convert the same into either an exclusive male or female school, that the school be under the entire control of this Lodge and that meeting rooms be fited above for the use for the use of this Lodge, to rent out.

Resolved, that the money now on hand belonging to this Lodge - all that may accrue in the future, except its legitimate expenses, - all the profits of the school and rents and all donations are faithfully applied to the liquidation of the debts caused by the building of said edifice till all be paid.

Resolved that a Building Committee be appointed . . . .

Resolved that a Committee be appointed to obtain donations and the promise of loans . . . .

John Hobbs was elected to the 3rd degree of Masonry.

A. Davis, Constantine Lodge No. 13 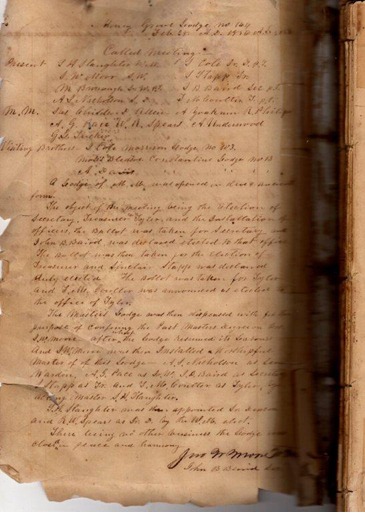 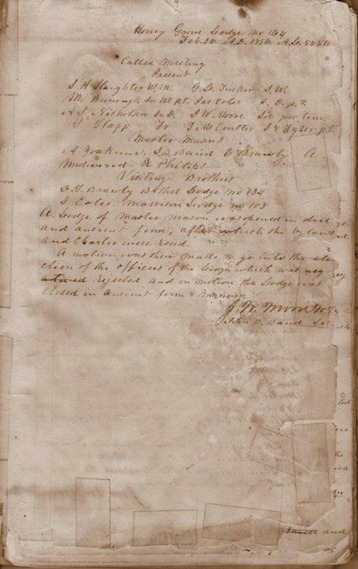 ​The first record book of the secretary of the Masonic Lodge has been saved and is in the process of being scanned.  Partial summaries of the pages are below.