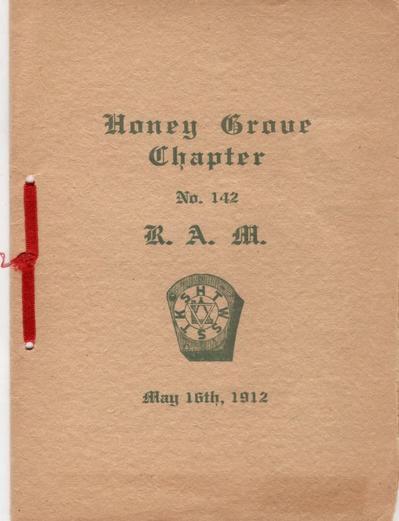 Cigars served at the door 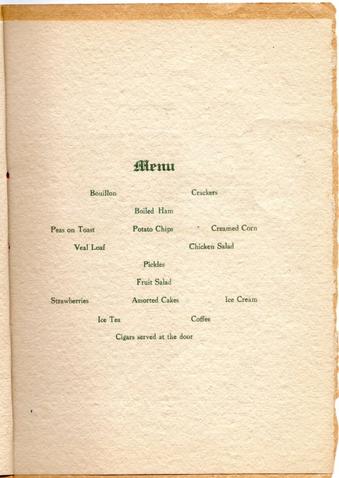 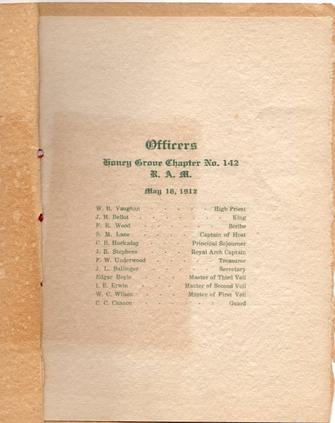 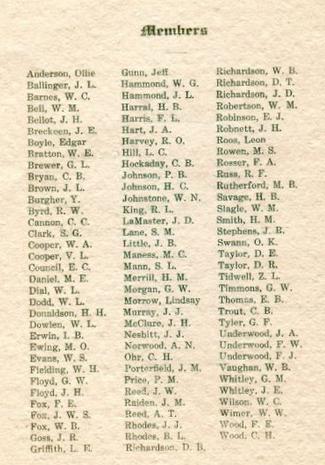 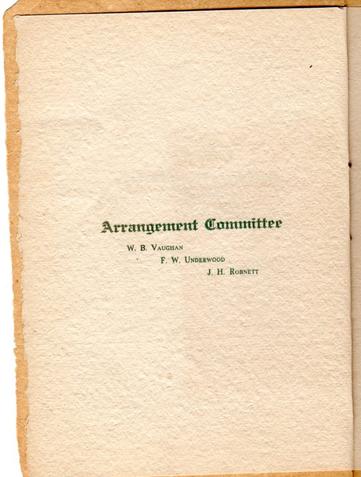 The following 1912 booklet is from the Fannin County Museum of History.

​Perhaps the oldest institution in Honey Grove is the Masonic Lodge, the title of which is Honey Grove Lodge No. 164 A. F. & A. M. This lodge is older than any other fraternity of the town, and older than any church organization in the city that had its origin here.

It was on January 24, 1856, that the charter of Honey Grove Lodge No, 164 was granted, and the first meeting following the granting of the charter was on February 26, 1856. The first officers of the lodge were A. H. Slaughter, W. M.; G. L. Tucker, S. W.;  M. Bronaugh, J. W.; James Cole, S. D.; A. J. Nicholson, J. D.; A. W. Moore, Secretary; Sinclair Stapp, Treasurer; T. M. Coulter, Tyler. The charter membership of the lodge was very small, the first meeting being attended only by the officers named and the following members: A. Yoakum, J. B. Baird, E. Brawley, A. Underwood and R. Phillips. There were two visitors from other lodges, D. G. Brawley and J. Cole. It must be remembered, however, that Honey Grove was then a one-store town and neighbors were few and far between. The lodge, however, grew from the start, applications being received at nearly every meeting, and by the end of the year there was a fair-sized Masonic body meeting regularly in Honey Grove.

The first place of meeting of the lodge was in the third story, or attic, of the old Smith hotel, which stood on the lot now occupied by Henley’s racket store and the Black & Little drug store. This building was owned by Orville Smith, father of our townsman, A. H. Smith, who remembers that the Masons used to make a lot of racket upstairs.

The minutes of the lodge of this early day are in a splendid state of preservation and they tell the story of much of the country’s early history. All of the charter members have passed away, but their names are found in many places on the early records of the lodge.

One of the first questions discussed, as shown by the minutes, was that of a meeting place. The rental on the room in the Smith hotel was $25 a year. A better building, which belonged to Mr, Walcott, was available at $50 a year, but $25 was a great deal of money then and the members voted to stay in the Smith hotel. The matter of erecting a building soon came up and was discussed at several meetings. Finally a resolution was adopted to erect a two-story building, the  upper story to be used as a lodge room and the lower story as a school room. Such a building was erected in 1858 on the lot where the public school auditorium now stands. There was a flourishing school in this building for several years. The building stood until 1888 but the lodge changed its meeting place some years before that time. The building committee reported that the structure could be erected for $1000, but as is usual with estimates, this one was too low. The building, complete, cost $1834.

Many matters of interest are found in the old records. Among other things the records show that in 1856 Colonel J. P. Woodson and S. S. McCIeary were here as prospectors and visited the lodge. Soon after this they moved to Texas, In 1856 Captain W. Underwood and S. A. Erwin were elected to membership, and in 1857 and 1858 W. A. Dial, R. H. Shaw, J, T. Alien, J. S, Searcy, O.F. Trout, Bluford Spelce, Jacob Leeman, W. L. Gwaltney, V. Peyton, Y. Burgher and many others who had much to do with the development of the country were initiated into the mysteries of the order.

Bearing date of December 27, 1856, there is a resolution thanking Robert and Larkin Chiles for music on the violin.

In 1861 the Civil War came on. At that time Captain A. J. Nicholson, one of the finest men ever claimed by Fannin county as a citizen, was Master of the lodge. He at once volunteered his services to his country, and as he was leaving the following resolution was adopted by the lodge and placed on record:

“Whereas, our much esteemed and dearly beloved Master, A. J. Nicholson, is about to resign his charge in this lodge, for a time, for another, at the call of his country, therefore, be it

Resolved (1) That we tender to him assurances of the high esteem in which we hold him because of our past Masonic relations, especially because of the kind but firm manner in which he has discharged all the duties which his high position in the Lodge imposed upon him, That we will mind him still when far away; that we will remember him in our devotions to Almighty God. That our prayers to the Grand Master above shall be that He will govern and protect him and his now charge and return him and them in due season."

Written By Harry Thompson in 1936

Honey Grove Lodge No. 164, Ancient Free and Accepted Masons, is getting up in years, having passed four score.  The lodge has been in existence here for 80 years, the dating of the charter being January 24, 1856.  Members of the Grand Lodge, which was located at Galveston, who signed the charter were F. B. Sexton, grand master; John B. McMahon, deputy grand master; John E. Cravens, senior grand warden; Henry Sanford, junior grand warden, William Stedman, grand secretary; A. J. Ruthson, grand treasurer.

A highly prized piece of property of the lodge is the first record book of the secretary, showing the proceedings of the first meeting after receiving the charter, which was held February 26, 1856.  The book is in good state of preservation and the manuscript is legible.  It is kept in a fire-proof vault for safe keeping.

The book reveals many names of men who not only were the foundation of Masonry, but who were a great help in the building and character making of Honey Grove.  Among some of these citizens are the names of M. Bronaugh, A. J. Nicholson, S. Stapp, T. M. Coulter, A. Yoakum, A. Underwood, W. Underwood, James Cole, J. P. Woodson, S. A. Erwin, Y. Burgher, W. A. Dial, William Bell and many others who were prominent in Honey Grove’s progress.

Just where the first meetings of the lodge were held cannot be ascertained, but from the minutes of the book the lodge was meeting indoors though whether in a residence or store room is not indicated.  At any rate, the members were not satisfied with their lodge room, and a motion was passed to change locations.  The exact wording of the resolution as it appeared was “an informal conversation took place as to the propriety of removing the lodge.  And in order to ascertain the sense of the members on the subject, the question, which would the lodge prefer, the school house belonging to Mr. Walcott at $25 or this room at $50 per annum?”  The membership voted and decided in favor of the school house.

In 1857 the body was endeavoring to erect a building to be used as a lodge hall and school for male and female students.  Donations were asked in either cash or materials.  The building was not built, however, until 1859.  It was then erected on the site of the present grade school auditorium.  The building was a two-story frame structure, the upper floor used by the lodge, and the ground floor for the school, which was known as the Masonic Institute.

After discontinuing the use of this building the quarters were moved to the third floor of the First national bank building, where they continued their meeting until 1914.  This year a commodious and beautiful home was obtained on North Sixth street over the Blake and Fowler building.  The hall is 80 by 80 feet with two large rooms, one for the use of an assembly hall, the other a banquet room and kitchen.