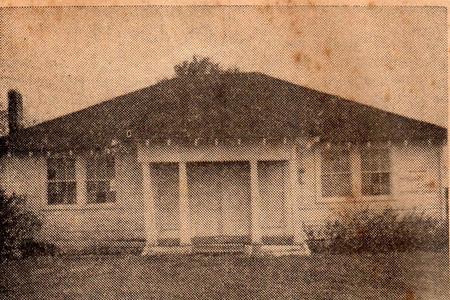 About the middle of the Nineteenth Century, settlers from the Eastern States began homesteading the land in the community about halfway between Honey Grove and what was then known as McCowanville (now Ladonia). This wooded area provided not only materials to build their homes but fertile land to raise food for their families.

These pioneers were not only interested in a livelihood but were interested in worshiping God, as was evidenced when a group of them gathered at the home of E. P. Warren in 1859 to organize what is now known as McCraw’s Chapel Methodist Church. For many years the church met in this home.

For many years a ten-day camp meeting was held beginning on Friday night before the second Sunday in August. At that time, many families brought their children, their chickens, their cows and necessary supplies to camp for the duration of the meeting.

In the latter part of the Nineteenth Century, Mr. John M. Raiden (father of Mrs. J. P. Dawson and a pioneer settler of the community) taught school in the church. Among his students were Mary and Martha Cox, whose father owned and operated a general store just north of the church.

Prior to 1922, the McCraw’s Chapel Church was in the White Rock Circuit.

In 1918, the church building was destroyed by a tornado. Before the building could be rebuilt, a young preacher, Ollie Apples, was sent by the White Rock Circuit. Upon his arrival in the community, he was directed to the home of Mr. and Mrs. Jim Reece, where the Dawson family had gathered for a Sunday dinner. The men of the group went with the preacher to the Bralley Pool School House where he delivered his first sermon. Mr. J. P. Dawson was among those present at that service. That day plans were made to hold their monthly meetings in the Nubbin Ridge School House (later known as McCraw’s Chapel School). The school was used as a meeting house until the early part of 1919 when the new church at its present site was completed. Rev. Apples served as the minister until 1922 when the church went into the Windom Circuit where it remained until 1962 when it became a member of the Honey Grove Circuit.

In 1955, a group of interested people met and organized McCraw's Chapel Cemetery Association for the purpose of  establishing a means of maintaining the cemetery, The following officers were elected:  President - William Rogers; Secretary-Treasurer - Pauline Rogers, Program Chairman -  Jewel Parsons, Directors — Albert Carter; A. P. Williams and Earl Bankston. After Mr. Williams moved away Walbert Houston was elected as a director.

On May 8, 1955, the first home-coming was held at the church.  Lunch was spread at the noon hour and a business session was conducted i the afternoon.  Sufficient money was collected to clean the cemetery, buy a mower and to keep the grass owed for a year.

Home-coming is an annual event held on the first Sunday in May, at which time a business meeting is condcuted and donations are received for the maintenance of the cemetery.

The following is from the Honey Grove Signal-Citizen

[More information on the McCraw's Chapel Methodist Church, including photographs of original records, are HERE.]