From a pamphlet written in October, 1983 by Alma Braudrick.

Methodism in the Honey Grove area began in 1842.  According to W. T. Glass of The Bonham News, W. B. Allen donated a plot of land near where the Allen’s Chapel community is now.  On that land a one-room log cabin was built and a Methodist congregation began to meet.  Rev. James Graham, an elderly pioneer preacher and educator from Paris, Texas, pastured the church.  A year later Baptists formed a congregation which met in the same log cabin.  That tiny rural chapel was the mother church for Honey Grove Methodism.

The Methodist congregation grew and finally moved to Honey Grove, where it joined a Union Church in 1856.  The Union Church was at the north end of Sixth Street and was built on land donated by B. S. Walcott.  Methodists shared this one-room log church with Baptists, Cumberland, Presbyterians, and Christians.  Each denomination sponsored worship one Sunday each month, and the fourth Sunday belonged to the Methodists.  The historic old Union Church bell rings today from the belfry of the First Baptist Church in this city.

Sometime in the late 1870s the Methodists pulled away from the Union Church and became a charge in the Methodist Episcopal Church South.  The charge was served by itinerant preachers called circuit riders.  Honey Grove’s last Methodist circuit rider was Rev. W. A. Moss.  During his appointment, the present site of the Methodist Church was bought and in 1879 a church building was begun.

Construction stalled, however, and in 1880 Bishop Pearce of the North Texas Conference sent to the Honey Grove congregation a fulltime pastor, Rev. J. F. Corbin.  The same conference changed the Honey Grove “charge” to a “station.

According to Rev. Corbin, “When I arrived in Honey Grove in 1880, I found no Sunday School, no prayer meetings, and preaching just once a month, so we held services in the one room just north of the church site.”

The church had a Gothic structure, built of natural rock from the William Floyd quarry which was located near Rock Point south of Honey Grove.  The sanctuary could seat about 450 worshippers.

Dr. J. W. P. McKenzie (affectionately called Father McKenzie) gave his name to the church.  Dr. McKenzie was a dynamic circuit riding preacher who established three missions in the North Texas area in 1836.  His mission in Clarksville eventually became the McKenzie Institute.  He was also appointed to be missionary to the Choctaw Indian Nation which roamed north and south of the Red River in those days.

In 1874, the congregation of McKenzie Methodist Episcopal Church South was privileged to welcome the honored and loved educator and preacher to the church which still bears his name.  At the time, Dr. McKenzie was a board trustee member of the Methodist-owned Paris District Honey Grove High School, which was located on the site of the present elementary school.

The elegant stained glass window in the east end of the Philathea Sunday School classroom was donated in 1887 in honor of Dr. McKenzie by the church’s organization of young women, the Galloway Society.  The Galloways, incidentally, were named for Bishop Charles B. Galloway.

The North Texas Annual Conference planned to hold its annual session in Honey Grove in 1887, which necessitated the expansion of the building to the west.  The church hosted the Annual Conference again in 1899.

By 1910, the congregation had outgrown its facilities.  Jacob Fein,  Honey Grove contractor and builder, was employed to build the new structure.  He used red pressed brick and native stone, with ornamental trim from the old building.  Mr. Fein included the pews and altar rail from the 1881 church.  The Honey Grove Signal newspaper reported that on Sunday Morning, January 29, 1911, “The congregation entered the splendid new building cemented by the golden ties of love and determined to do great things for the extension of the Master’s Kingdom on earth.”  Dedication of the building came on March 31, 1912 and was led by Bishop Edwin Monzon of Dallas.

Long-time members and first time visitors alike can imagine the feelings of awe and the sense of exquisite beauty experience by that congregation in its brand-new facility in 1911.  The stained glass windows with the ornate frames and the warm wood-carved pulpit which were new then continue to inspire present worshippers.

The magnificent McKenzie Church pipe organ was installed six years after the completion of the massive building project, and was dedicated on November 22 of 1918.  The console of the instrument was renewed in 1968.  [Note:  the organ was rebuilt in 2012-13 and rededicated on June 21, 2013]

On the east wall of the sanctuary are bronze plaques given to the church in memory of those church members who fought and died in World Wars I and II. 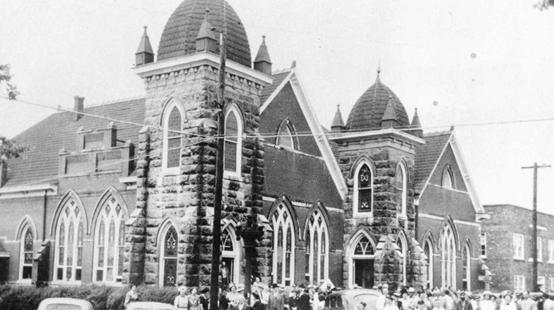