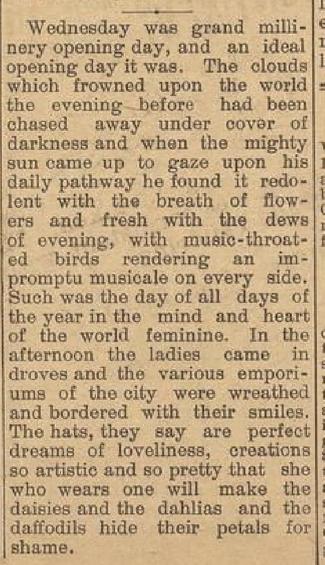 Wednesday was grand millinery opening day, and an ideal opening day it was.  The clouds which frowned upon the world the evening before had been chased away under cover of darkness and when the mighty sun came up to gaze upon his daily pathway he found it redolent with the breath of lowers and fresh with the dews of evening, with music-throated birds rendering an impromptu musicale on every side.  Such was the day of all days of the year in the mind and heart of the world feminine.  In the afternoon the ladies came in droves and the various emporiums of the city were wreathed and bordered with their smiles.  The hats, they say are perfect dreams of loveliness, creations so artistic and so pretty that she who wears one will make the daisies and the dahlias and the daffodils hide their petals for shame.

The grand fall openings of the millinery emporiums of J. L. Ware, The Underwood Co., R. L. Wood and Williamson, Blocker & Co. Wednesday claimed the entire attention of the fair sex and society's votaries were out in full force.  The milliners had been busy several days arranging the displays of the pretty headgear, which is always the cynosure of feminine eyes, and the stores were dreams of loveliness.

Each of the emporiums deserves special mention upon the many pretty bonnets displayed, but as this scribe is no connoisseur of the millinery art, he can only say that all the displays were bewildering and the hats are prettier than ever before.  From the ladies we learn that the hats are of rather flat pattern, quite large, with brilliant coloring.  Foliage and laces are largely used and there is no paucity of plums and tips.

In addition to the regular opening Wednesday, Miss Dairy Brigance, in charge of The Underwood Co.'s millinery department, gave a reception Tuesday evening, which was largely attended and highly enjoyed.  The entire store was a blaze of beauty and the ladies lingered long to feast their eyes on the many pretty things.  A string band discoursed inspiring music for the occasion and refreshments were served.  The reception was a great success and a rare treat for the lovers of the beautiful

See below examples of these hats. 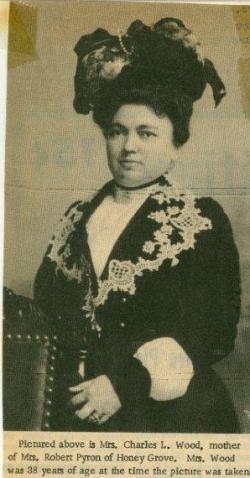 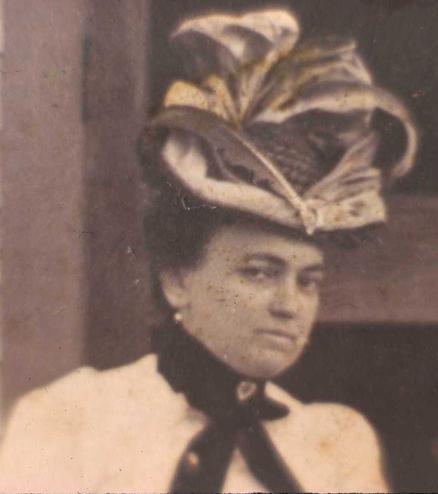 Wednesday was opening day with the various millinery establishments of the city and the ladies were out in full force.  What Christmas is to the small boy and "mancipation" is to the colored folks opening day is to the fair sex - the great event of the year.  As Easter approaches a young man's fancy "gently turns thoughts of love," but the feminine fancy joyfully turns to thoughts of headgear.  Millinery displays are always beautiful; the styles may change and popular shapes and ornaments vanish away, but no matter what the styles may be the bonnets are just lovely - and expensive.  Prosaic men imagine that the genius of mankind is absorbed in encircling the globe with the wireless telegraph or building mighty engines, but in this they are mistaken; a goodly portion is given to mashing hats into the proper shape and dying ribbons of various hues.

The four millinery emporiums of the city - Williamson, Blocker & Co., R. L. Wood, The Underwood Co., and J. L. Ware were crowded all day Wednesday with fair visitors.  All the latest creations of the milliner's art met the gaze of the visitors and they were charmed with the beautiful displays.  It seems to us that the hats are prettier this year than eve, and from expressions heard the ladies think so too.  The new dress fabrics were also handsomely displayed at the placed mentioned and at the other dry goods establishments of the city, all of which tended to gladden the hearts of the ladies and lighten the purses of the men.

In addition to the display on opening day the milliners at the Underwood Co's. tendered a reception to ladies and gentlemen at their emporium Tuesday evening.  Those who attended were not only charmed by the display of pretty things but were regaled with inspiring music and refreshed at the ever-welcome punch bowl.

The wealthy and fashionable ladies of Honey Grove wanted the latest in hat fashion, and the businesses on the Square competed to provide it.