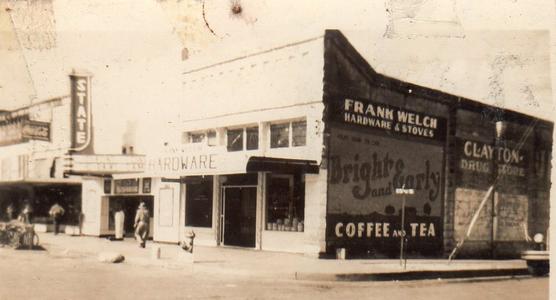 The first successful movie house in Honey Grove was The Strand.  It was in the building just north of where the Signal-Citizen is now located on North 6th.  The Strand operated during the twenties also in the thirties.  Edna Lee Braudrick was ticket girl for 11 years at the Strand.  Mr. Gill sold The Strand to Bob Lilley, John Donald, and Doug Mitchell.  They sold to the Killoughs.

The Strand was entertainment all the way for a generation of small fries, before giving over to a thing called progress and closing down in 1943, opening on rare occasions when the new State was overcrowded.  Many happy hours were enjoyed in the darkened thrilled packed seats of which now nothing is left to remind us of The Strand.  The Lincoln theater was also another Saturday meeting  place for Honey Grove's movie going era.  The Lincoln operated for a few successful years in the building now occupied by the Carpet Barn on South 6th.  The Lincoln operated in years during the war.

The new State theater was opened in the late thirties, on the east side of the square which now houses W. C. Poimboeuf Chiropractic Office.  I remember seeing my first movie at the State.  As a youngster I remember watching the western of Autry, Rogers and Hopalong.

The State was a handsome showhouse, and was the only movie palace in Honey Grove for a decade.  Out family lived south of town and I can still recall when Saturday came we packed up heading for town to see a big movie at the State.

The State met the end in 1950 when the crowds outgrew its size.  Instead of enlarging, it was shut down, and a brand new movie palace opened, called The Grove.  All that remains of the State is the historical decorationed sidewalk, where the old times used to enter its doors.

The all new Grove theater was opened in the early part of 1950.  The Grove was located where Liz's Style Shop now stands on the north side of the square.  The Grove was a magnificent theater, being Honey Grove's most plush showplace.  The Grove owner was Gordon Mclendon of Dallas.  Joe Jones was manager of the Grove.

Many surrounding area towns would visit Honey Grove so they could see their favorite movie.  A packed house was usually greeted at the Grove until it was destroyed by a spectacular blazing fire in the late sixty's.

In the early seventy's the Grove marquees were moved to the northwest corner of the square and was reopened in one of the old saloon buildings.  However the Grove bit the dust and closed down a couple of years later.

The building is now used by the Baptist Temple.  Honey Grove is now left with no movie palace.  A marquee sign is all that is left to remind us of a time of entertainment now gone but not in memories.  Looking back old timers can vividly remember the Grove, State, Strand, Topic and other in the entertainment history of Honey Grove. 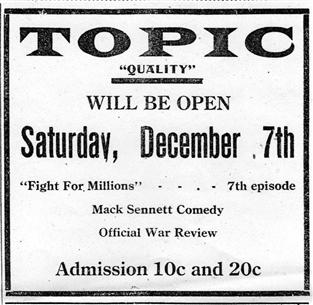 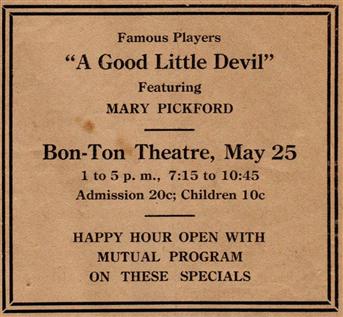 Honey Grove historical movie palaces have now all vanished, yet the movie theaters certainly had their part in the growth and progress and should always have a recognized place in Honey Grove's historical glory.

There have been many motion picture theaters in Honey Grove.  They have come they have all gone.

Honey Grove's first movies were slides and acts which were shown at Hickory and 6th, across the street from the present city hall.  Movies were also shown upstairs over the location of the Piggly Wiggly store.

The first movie house however in Honey Grove's history was The Nickelodeon.  Owner was Mr. Bob Bryan.  The Nickelodeon was located on the west side of the square which how is the home Royal Cleaners now occupies.  At the Nickelodeon Harry Thompson and Grady Ragsdell would sing as Bee Tidwell played the piano, while slides were shown on the screen.

The other early movies theaters in Honey Grove were The Bon Ton and The Home Theater.  These theaters were operated in the teen's long before sound came to the screen.  The Bon Ton was on the south side of the square which stood where the Style City is now.  The Home Theater was located in the building which is now occupied by John Black's Insurance Office.

The Movies in Honey Grove

Read about the first talking movie.