The article below is from the Denison Daily News,

from Tthe Portal to Texas History

The Dallas Express was a weekly African American newspaper published in Dallas from 1892 - 1970.  Some issues are available on the Portal to Texas History website.  Some issues contain information about the black community in Honey Grove, and also sometimes about Ladonia and Bonham.  We are transcribing some of the information about Honey Grove, and you can read it HERE.  So far the information we are transcribing covers the period of 1919-1924.

A few issues of African American newspapers published in Houston have information on Honey Grove, and we have transcribed them HERE.

The History of the Honey Grove Signal-Citizen

The distinguished editor of the Honey Grove Signal, J. H. Lowry, having attained the age when most men retire, decided to take life easier and combine his newspaper work with that of the Honey Grove Citizen. The Citizen had been under the capable editorship of Mr. J. D. Moyer until his death but at the time of the consolidation of the two papers, the Citizen was operating under the ownership of Mrs. J. D. Moyer, as publisher and Hugh B. Moyer as editor.

The physical plant of the Signal was moved into the Citizen building on the east side of north Sixth street and from that time on the two papers were published as one under the joint editorship of Mr. Lowry and Hugh Moyer. When the Citizen was first in operation in Honey Grove it had been located in a sheet iron building on the west side of Fifth Street just north of the Walcott Block of stone
buildings. This old building was to later serve as a JP court. Mr. Moyer had a chance to buy the lower floor of a sizable stone building on sixth street so he had moved over there at the time of the consolidation. The physical plant of Mr. Lowry’s Signal was originally on the second floor of the Walcott Block just above what was at that time the Post Office on the comer of Main and Fifth Streets. The paper was later moved down on the ground level and was located just a few feet away and was to the rear of the older stone building. Its office faced south and was on Main Street until the time of the consolidation.

With the consolidation of the two papers in February of 1929 Mr. Lowry was semi-retired because of his health. He maintained, however, his desk at the paper and helped with it when needed and retained his financial interest in it. On March 1, 1932 he disposed of his financial interest by selling to the Moyers and retired permanently, passing away on November 17,1932.

The Signal-Citizen was edited and published by Hugh B. Moyer following Mr. Lowry’s passing for a period of some six years. He was active in civic affairs and although Honey Grove like the rest of the nation was in the throes of the “great depression” Mr. Moyer was able to keep the paper going during a period when many others failed. Hugh Moyer died suddenly of a heart attack in 1938 leaving the paper under the ownership of his elderly mother, Mrs. J. D. Moyer. Mrs. Moyer continued as publisher until her own death in 1941.

Upon the death of Mrs. J. D. Moyer the ownership of the Signal-Citizen passed to her daughter, Mrs. G. K. Fladger. Mrs. Fladger then took an active part in the paper for a time and her husband became the publisher and editor until his death in 1955. At that time, Joe T. Morrow assumed the editorship of the paper with Mrs. Fladger remaining active in its operation.

In July of 1955 a fire started in a building joining the Signal-Citizen plant and, since there was no firewall between the two locations, the newspaper plant was totally destroyed along with all of its records and old newspaper files. The newspaper did not, however, lose a single issue as it continued in operation in temporary quarters until such time as a new building could be constructed. Mrs. Fladger purchased the lot on which had stood a cleaning and pressing shop that was destroyed by the same fire and she built a new building for the paper. It remains in that location today.

Mrs. Fladger retired from active participation of the paper in 1956, but remained publisher emeritus until her death in 1971. Mr. and Mrs. Joe T. Morrow had previous to her death purchased the paper from Mrs. Fladger in September of 1970 with Mr. Morrow active as editor. They operated under the name of the News Publishing Company and also printed and published The Ladonia News and for a time published The Wolfe City Sun.

Mr. Morrow operated the paper longer than any other owner. He was a solid civic and church leader, and was highly respected for his Masonic work throughout the United States.

Mr. Morrow was leading a Masonic service when he collapsed and died suddenly in 1982. His death was a great shock to the community, and thousands attended his funeral services.

Mildred Morrow, his widow, continued to operate the business until early 1984.

In April of that year, the entire business was sold to John and Vickie Shaw of Ladonia, who continued operation of the paper until 1990. Betty Ryser, long-time employee of the paper, and her husband Carl purchased the paper from the Shaws that year, and made many improvements to the structure during their nearly seven years at the helm.

In March, 1996, the business was sold to Francis Stipe and Jim Monroe of Oklahoma. Mr. Stipe and Mr. Monroe are career newspaper professionals who own a number of print and broadcast media venues, including the Bonham Daily Favorite.

The paper continues today with Shaw having returned as Editor (see related story), and the business also publishes The Ladonia News and provides commercial printing to the area.

Both of the newspapers remain as two of the oldest continually printed newspapers in Texas. The Ladonia News is 117 years old as of 1997, and will enter its 118th year later this Spring. 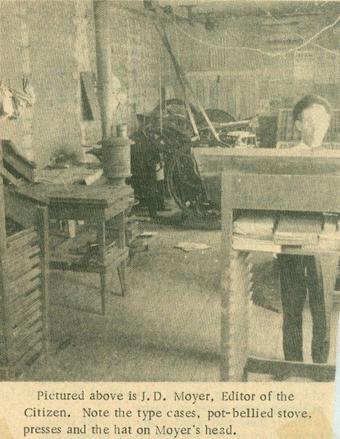 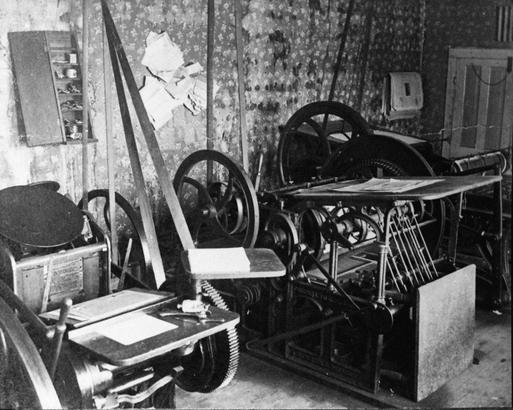 The following is excerpted from One Hundred Years and other sources.

Mr. Thompson kept The Independent until 1878 at which time it was sold to the Hornbeck Brothers.

The Honey Grove Signal was established in 1891 by J. H. Lowry.  A friendly rivalry and mutual respect existed between the two newspapers.  The editors often helped each other in setting the type and other business matters.

[See issues of the 1896 Honey Grove Signal at the Portal to Texas History Website.]

Another publication, The Crescent, was started in 1898.  Editors and publishers were H. B. Ballew and Sam N. Thompson.  Offices and the printing plant were in the second story of what is now the Bertha Voyer Memorial Library.  The Crescent was published for about two years.

In 1929 The Signal and The Citizen consolidated into the Honey Grove Signal-Citizen.  Hugh B. Moyer and J. H. Lowry served as editors and publishers.  Later Lowry sold his interest to the Moyer family.  The newspaper was edited and published by Moyer until his death in 1938.  Harry Thompson, once on the Signal staff, became editor until his retirement in 1954 when Lynn Roddy edited for a few months.  Mrs. John D. (Marion)Moyer served as publisher from her son's death in 1938 until her own death in 1941.

In 1941 the Signal-Citizen became the property of the Moyer daughter, Lucille Fladger,  whose husband, G. K. Fladger, published the paper until his death in 1955, when Lucille Fladger assumed the role of publisher and Joe Morrow assumed the editorship of the paper.  Mrs. Gladger retired from active participation in 1956, but remained publisher emeritus until her death in 1971.

The newspaper plant was totally destroyed by fire in July, 1955, including the files of the paper.  For a number of months The Signal-Citizen was printed in the plant of The Ladonia News at Ladonia.

In 1870 Honey Grove was a rising young town - population 382, and was in need of a newspaper.  Thomas R. Burnett, a Confederate veteran from Kentucky came with his family to live here and he established The Enterprise.  He was the grandfather of the wife of Neal Palmer.  Mr. Palmer was the brother of Mrs. Henry Allen, and the uncle of Mrs. Mary Palmer Allen Cleveland.  Mrs. Palmer was the daughter of the prominent Dr. T. J. Calwell and Alura Bell Burnett Caldwell, early pioneers.  Mr. Burnett also had interest in the Ladonia paper and the Bonham paper.

[Note:  a few issues of The Enterprise are available at the Portal to Texas History website.]

George A. Caldwell from Kentucky was the typesetter of The Enterprise and it was printed on an old hand press.  George married Mary Moore, a Honey Grove girl.  He moved from here in 1872 back to Kentucky, in 1873 he moved to Nebraska, in 1874 to Colorado, and to California in 1911.

The last account we have of him was he was still in California and was more than 90 years old.  Thomas Burnett, the editor left the printing world to become a Church of Christ minister.

The first permanent paper of Honey Grove was established in 1874 by Thomas B. Yarbrough.  It was named The Independent.  Mr. Yarbough was owner and editor, and W. A. Crooks was the publisher.  In the fall of 1865 Mr. Yarbrough came to Honey Grove and went to work in the store of D. C. Cosner.  Five months later he bought the store, gave Mr. Cosner, the owner, $200 in cash and the rest he had to pay out.  Mr. Yarbrough was really a man of action.  In 1871 and '72 he served as Magistrate, County Commissioner and Tax Assessor.  In 1875 he was an active member of the building committee of the Honey Grove High School, built by the Methodist Conference, and he was also secretary of the board of managers of this school.  In 1878 he built a two story business house of the stone from the Floyd quarry.  This building is one of our business houses today (1976) on the east side of the square, 6th and Market street.

Mr. Yarbough was the father of Mrs. Sue Yarbough Little.  He died in 1897.  At the time he was cashier of Planters National Bank.

In 1876 he sold The Independent to Bramlette and Seaton.  Mr. Seaton was a man of wealth.  His home was on the east end of the block where the Blocker house is built.  L. C. Hill owned this house till it was sold to Glenn Clark - owner today (1976).  Mr. Seaton was the owner of fine horses and his barn was like no other.  His horses were individually stalled and chutes carried the feed to each stall.  George Messerer was the keeper of these horses and his home was on the second story of this barn.  He was a brother of Fritz Messerer.

[Note:  The Denison Daily News of January 19, 1878 says that "the Honey Grove Independent has changed hands, Messrs. Dunn & Furey having sold out to our old San Antonio friend, John W. Thompson, recently of the Pilot Point Courier.  The Independent is a sprightly paper, but it will be none the less worthy of liberal patronage under the management of Mr. Thompson."]

Bramlette and Seaton sold the paper to Gus Ivey, who kept it only a short time, then sold it to Dunn and Thompson, who kept it till 1878.

J. M. Dunn was married to Lucie Ballinger and they were the grand-parents of Lucie Clift Price, one . . .

Do you have any copies of old Honey Grove newspapers?  If so, we would dearly love to see them.