These are some of the past histories of the African American community in Honey Grove. Texas. The school that I attended was Bralley High. The building was located on East 16th St then. I remember going to school on Commerce Street and the last building was on Pacific. The school was named after an early superintendent, Mr. F. M. Brailey who headed that office from 1892 to 1906. Not much is known of Bralley High prior to 1910 as no official records are available. From 1910 to 1920 there were only two teachers at Bralley. Mrs. Eva Pollard the future Mrs. Taylor and Mr. W. J. Taylor, who was also principal and janitor. In 1920 Mr. John W. Pendleton became the new principal, teacher, etc. He taught along with his wife. Carrie. Through the efforts of Superintendent Barker and others, students from all the small towns and counties around Honey Grove were brought to Bralley High in the 1940's. I am sure many of us remember cold mornings waiting for the bus to hurry in from Brookston, High, Petty, Windom,  Dodd City, and Bug Tussel. My youngest brother Franklin walked with crutches. I walked with him rain or shine from 706 N. 16th St. to Bralley High School on South Pacific. Sometimes he would fall. We were not allowed to ride the school bus. Most times James Allen, my brother walked with us. There was not a car in our family. Mr. Robert Boone started teaching later on and would come through from Paris and picked my brother Frank up. And by the way Franklin Allen went on to college, got married and works at one of the largest banks in Denver, Colorado and he still walks on crutches.

Mr. John Pendleton retired in 1959 to honor this man who liad given many years of his life to our school. Bralley High was renamed Bralley Pendleton High. The integration of 1965 closed our doors forever. By 1967 all of the old buildings were sold. It is good to reflect on the hard work and dedication of many teachers. N. E. Campbell. Nanon Perdine, Marita Brown, Lucy May Hobby, Gwendolyn Smith, Ruth Briggs, E. J. Polk, Myrtle Ryan, Ruth Turner, Iceola Wheeler, Willie Lewis, Lillie Jackson, Myrtle Johnson, Robert Boone, Gerald Seay, Nellie Terry, Alphonzo Terry, J. T. Garnett and Imogene Givens. These men and women gave their all to prepare us tor the future. Also there were many businesses (black) here in the 40‘s, 50‘s, 60's. I remember Kid Harris Candy Store and Barber Shop. Also Smith’s Barber Shop and there were two funeral homes for blacks. Prude Funeral Home and Store, and Mr. and Mrs. McIntyre Funeral Home on West Pacific. Also I remember Logan Cafe, the Blue Goose Cafe, and the Byrd Cafe on Pacific Street. And of course don’t forget the churches. Trace Temple Church of God and Christ. 16th St. Baptist was ‘Eastland', Christian Chapel and 8th St. Methodist. St. James Baptist Church. 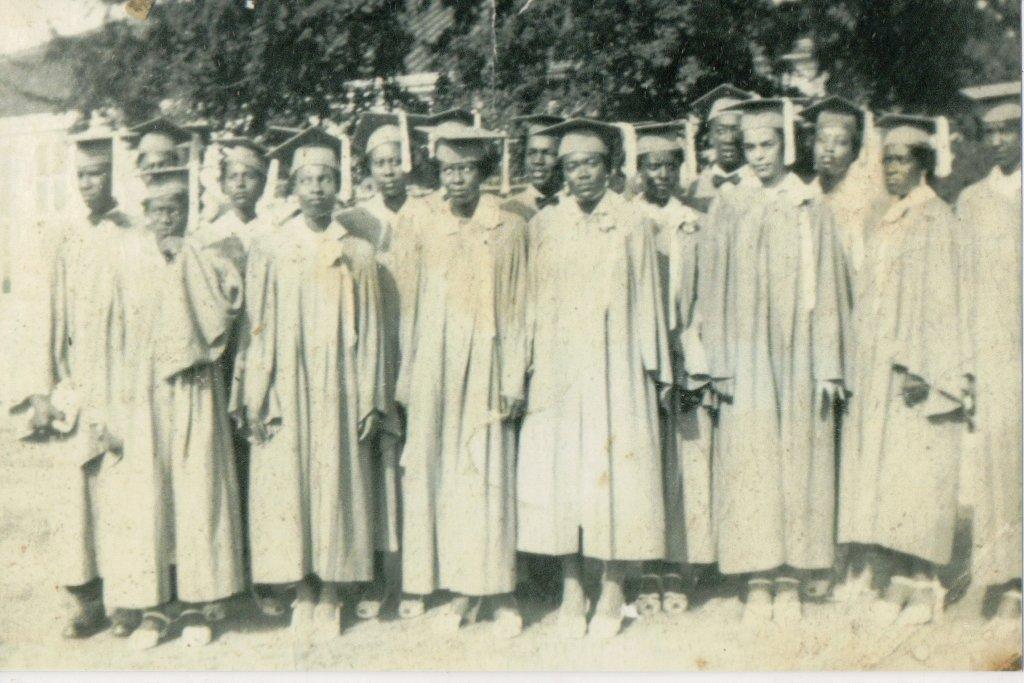 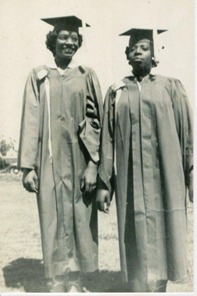 The girls' Basketball team of Brallley high school has won the district championship trophy.  They were to play Commerce the best two out of three.  Bralley girls won the first two games by defeating commerce by a score of 28 to 32, the game being played in St. Paul, Grreenville and the second game was played in Ladonia the score was 25 to 30 in favor of Bralley girls.  A third game was played in Roxton to help raise finance for the district champion boy team to go to Prairie view for state play-off.  Ladonia boys won over St. Paul.  The commerce girls failed to show up so Bralley girls played Roxton girls.  Honey Grove won by a score of 19 to 33.

Before presenting the trophy in chapel Monday morning, Coach J. S. Pendleton gave a brief history of the record the team has made the past four seasons.  Honey Grove is known throughout the state for having an outstanding basket ball team having won more championship trophies than any other team on record.  He also admonished the ones who were finishing to show good sportsman ship in life if they were to make good citizens in the community and in the state and nation.  Practice fair play an l ead good clean and wholesome lives.

The following girls attended the Area 1 meeting at Longview, Marie Haggerty, Sarah Hopkins, Altrice Leftrick, and Ruthie May Perry.  There were about six hundred NHA-ers and near one hundred Advisers present.  Beautiful corsages of red carnations tied with NHA colors of blue and white were pinned on two former leaders in the area and district, one was Mrs. Lillian Williams, Dallas, and the other one was Mrs. C. M. Pendleton, Honey Grove.

A detailed history of the Bralley-Pendleton School is on the Fannin County Historical Commission website.

The commencement exercises of Bralley high school was a success.  Program

Chorus - Come Where the Lilies Bloom

Chorus - Amy Own America, I Love But Thee Alone

Class Play - The Call of the Colors

Address and presentation of diplomas, D. W. Rowton, Pres. of School Board 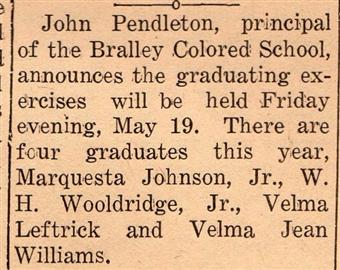 Article from the May 1, 1957 Honey Grove Signal-Citizen 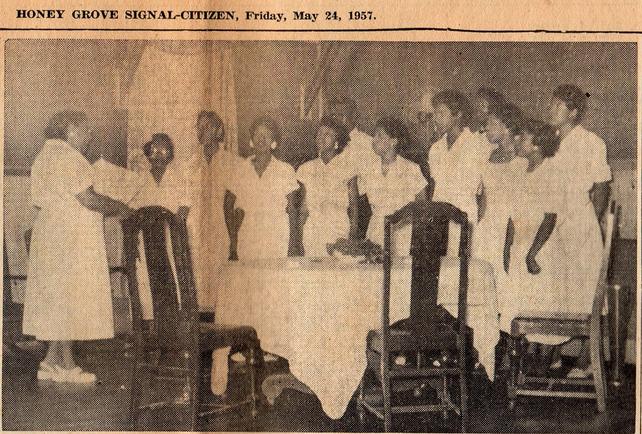 This photo accompanied an article about the meeting of the Honey Grove School District Board of Trustees at the Bralley School.  The photo shows Mrs. Carrie Pendleton leading the Bralley Choral group in a choral number. 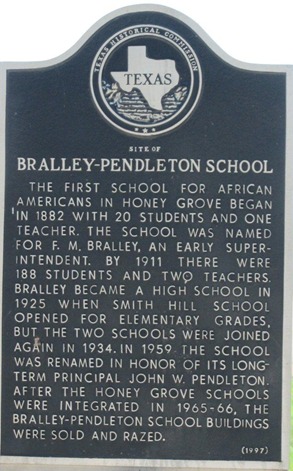 The first school for African Americans in Honey Grove began in 1882 with 20 students and one teacher.  The school was named for F. M. Bralley, an early superintendent.  By 1911 there were 188 students and two teachers.  Bralley became a high school in 1925 when Smith Hill School opened for elementary grades.  But the two schools were joined again in 1934.  In 1959 the school was renamed in honor of its long-term principal John W. Pendleton.  After the Honey Grove Schools were integrated in 1965-66, the Bralley-Pendleton school buildings were sold and razed.

​An article in the Honey Grove Signal-Citizen of November 2, 1956 reported that there were three teachers and over one hundred pupils.  The last name of the Superintendent was Denny.