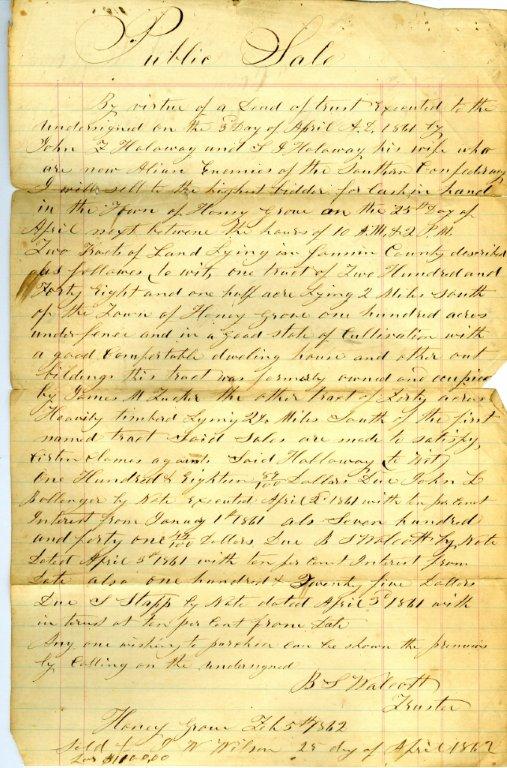 During the Civil War both the U.S. and the Confederacy passed laws that allowed the confiscation of property owned by supporters of the other side of the war ("Alien Enemies").  The law also required the reporting of such property.

The document below is from the collection of Deidra Jackson, a descendant of the Walcott family.   We have been told that documents such as this are rarely in the public domain, and are posting it here for researchers.​

By virtue of a Deed of Trust executed to the undersigned on the 3rd day of April A. D. 1861 by John F. Holoway and S. J. Holoway, his wife who are now Alien Enemies of the Southern Confederacy, I will sell to the highest bidder for cash in hand in the Town of Honey Grove on the 23rd day of April next between the hours of 10 A.M. & 2 P.M. Two Tracts of Land Lying in Fannin County described as follows, too wit, one tract of Two Hundred and Forty Eight and one half acre Lying 2 Miles South of the Town of Honey Grove one hundred acres under fence and in a good state of cultivation with a good Comfortable dwelling house and other out building, this tract was formerly owned and occupied by James M. ____.  The other tract of forty acres Heavily timbered lying 2 1/2 miles South of the first named tract.  Said sales are made to satisfy ____ claims against Said Holloway, to wit, One Hundrred & Eighteen 89/100 dollars due John L. Ballinger by note executed April 2, 1861 with ten percent Interest from January 1st 1861 also seven hundred and forty one 40/100 dollars due to B. S. Walcott by note dated April 5th 1861 with ten percent Interest from date also one hundred & twenty five dollars due S. Stapp by note dated April 9, 1861 with interest at ten per cent from date.

Any one wishing to purchase can be shown the premises by calling on the undersigned.