Notwithstanding the inclement weather a large crowd attended the initial coursing meet at Robbeken Park Tuesday afternoon, over 1000 people passing through the gates.  The hares, with a few exceptions were very fast, the dogs werre in good trim and the crowd jolly and hilarious.  The music furnished by the Woodman Band was quite a feature of the entertainment, and added much to the pleasure of the crowd.  The grand stand was inadequate to seat the crowd, but the management assures the public that in the future there will be good seats for all who attend.  The grand stand will also be enlarged and there will also be a stand erected for the colored people.  The following is the score:

Robbeken Park in Honey Grove, located near where the high school is today, was a very popular place for rabbit racing, with very large crowds attending, as the articles below attest.  The advertisement above is from the Honey Grove Signal, March 21, 1902 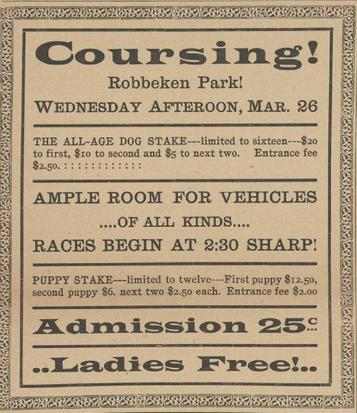