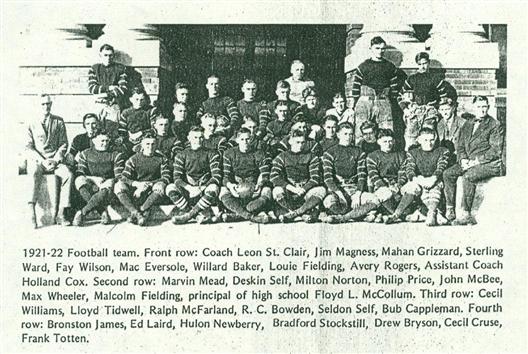 In 1921 the Honey Grove football team went to the state quarter-finals back in the days when the little schools played right along with the big ones.  Honey Grove tied Oak Cliff of Dallas 0-0 in the quarterfinals, and had to play them over in Dallas.  Oak Cliff won that one 7-0.  Mack Eversole was on that 1921 team.  Two other members of the 1921 team went on to become Southwest Conference captains, and another Honey Grove boy, Wash Underwood, who was attending high school at Terrell Prep in Dallas that year, also became a Southwest Conference captain.

Fay (Mule) Wilson was the all Southwest Conference fullback in 1924 and 1925.  After graduation from Texas A&M, Wilson played for the New York Giants in 1927-1932.  Later Wilson was inducted into the Texas A&M Hall of Fame.

Wilson's brother, T. F. (Puny) Wilson, preceded him at Texas A&M.  He was also an all-SWC end for three years.  Puny Wilson was also inducted into the Texas A&M Hall of Fame.

Wash Underwood was all-SWC two years during his playing days at Rice.  His brother, John Underwood, was all-SWC in 1920 and 1921 at Rice.  Both have been inducted into the Rice Hall of Fame.  Wash Underwood dropped back from Center to do the Owl's passing and punting.  His coach was John W. Heisman, the coach after whom the Heissman Trophy was named.

Another Honey Grove star was Eugene (Gene) Hodge.  Hodge played on the 1934 Honey Grove team that did not allow any points during the regular season games.  Hodge still holds [1990] the state record for catching twenty-one touchdown passes and three extra points for a total of 129-points.

The Honey Grove Golf Club was organized in 1926.  Read about the history HERE.

​Badger fighting, a sport that was popular in Honey Grove years ago, has been revived and promises to regain all of its old-time popularity, provided such exhibitions are not prohibited by the law for prevention of cruelty to animals.  There was a big fight on the West side of the square Wednesday in which the badger proved exceedingly tough and the dog fought with all the ferocity of a striped tiger of Bengal.  Honors were about even at the close.  Several gentlemen from other states and countries were present and witnessed for the first time an exhibition of true Texas sport.