See original records for the church beginning in 1911. 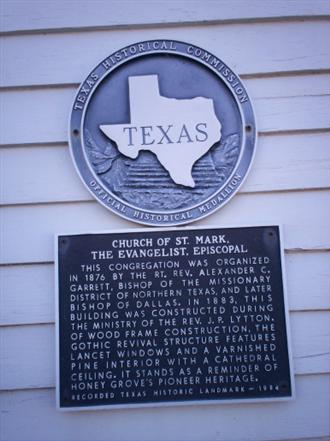 ​The congregation of the Church of St. Mark, The Evangelist, Episcopal was organized in 1876 by the Rt. Rev. Alexander C. Garrett, then the Bishop of the Missionary District of Northern Texas and later Bishop of Dallas.  In 1883 a beautiful church of wood frame construction and with a varnished pine interior was constructed.  Bishop Garrett laid the cornerstone of the St. Mark church on April 19, 1883.

While at a time robust and loyal, the congregation of the Church dwindled, as the economy of the town of Honey Grove and its population decreased, with young folks having to move elsewhere for good jobs.

In 1993 the Hall-Voyer Foundation in Honey Grove assumed ownership of the former Church building in order to preserve it.  Extensive restoration was completed at that time.  The building was leveled, rotten wood replaced, re-roofed, painted the original colors, re-wired and had central heat and air added.  The pine floors were uncovered and refinished.  The stained glass windows and the pump organ were restored and electrified. A gazebo was built on the grounds.  Since 1993 the building has occasionally been used for weddings.  Its interior is in outstanding condition and,is breathtaking.

History of the Church of St. Mark the Evangelist

​From the Diary of Bishop Alexander C. Garrett

In 1876, Alexander C. Garrett, Bishop of the Missionary district of Northern Texas, later to become the Bishop of Dallas, and the Presiding Bishop of the United States drove to Honey Grove and held service and baptised.  He was the guest of Colonel and Mrs. Waltermire.

In 1877, Bishop Garrett accompanied by the Rev. Dr. Lawson spoke in the "Union Church" and baptised.  A service of confirmation and holy communion were also held.

In 1877, Bishop Garrett arrived in Honey Grove, where he said Evening Prayer, and baptised and confirmed 5 persons:  Thomas Elliott Bolling, George Lorenzo Brewer, Harry Jackson, Annie Eva Stobaugh and Jessie Williams.  The infant baprised was Richard Elliott Bolling.  On July 17, he examined the application for the organization of a mission church to be knows as the Church of St. Mark the Evangelist.  Garrett appointed the following officers of the church: Thomas B. Blake - Bishop's Warden, John Marshall - Treasurer, and George L. Brewer as Secretary.  The other four members of the vestry were to be elected by the congregation.  On November 24, 1877, morning prayer was said by Mr. Lytton, who had been appointed as vicar and Bishop Garrett preached and administered the Holy Communion from the Reserved Sacrament.  That evening Mr. Lytton said Evening Prayer and Bishop Garrett confirmed and addressed the following person in the "Union Church" which was at that time the home of St. Mark's.  They were: James Evan Moore, Albert Alexander Smith, William Waltermire, Mrs. Jeffie Jennings and Alice Stobaugh.

Due to a scheduling conflict with Cooper, Bishop Garrett did not visit Honey Grove, but the services of the church were conducted weekly by the vicar.

On April 19, 1883 Bishop Garrett laid the cornerstone of St. Mark's Church.  The contents were:  A Holy Bible, A Book of Common Prayer, A Hymnal, the Constitution and Cannons of the Episcopal Church, a newspaper, and a bottle of sacramental wine.

On the evening of the 19th, he assisted Dr. Lawson at Evening Prayer and confirmed three persons.

The church property had cost $400.00 and consisted of three prime lots.  The deed to the lots was recorded in the courthouse and was then taken to bishop Garrett's Office in Dallas.

On May 5, 1884, Bishop Garrett arrived and was met by Mr. Fetchett, a deacon, who was the deacon-in-charge.  The church was neat and well built, with good pews, a fine altar, tabernacle, fine windows, but the builders did not include a vestry.  I (Bishop Garrett) allocated money for the vestry, in the L shaped building which would cover the cost of $150.00.  That evening, Mr. Fetchett preached and Bishop Garrett confirmed:  Dr. William Booth, Mrs. Cordelia Booth and Adele Pennybaker.

On May 6, 1884, Bishop Garrett consulted with the vestry and the Rev. Mr. Fetchett about adding the vestry room.  Bishop Garrett gave them $122.00 of the $150.00 to build the addition.  [According to Mary Wells, the room was not built until the choir had it added.]

On March 10, 1886 Bishop Garrett arrived and talked with the vicar the Rev. F. E. Evans.  He said Evening Prayer and Preached to a crowded church.  It was Ash Wednesday.

On April 14, 1887, Bishop Garrett was met by Mr. Evans in Honey Grove.  He was there to present candidates for confirmation.  The Parish was without a clergyman.  Bishop Garrett confirmed James McCormick Coulter and Walter Tilton Henderson.

​On February 9, 1888 Bishop Garrett administered Holy Communion in St. Mark's and at the same time united in marriage Charles Leander Wood and May Rutherford.

On April 16, 1890 Bishop Garrett was summoned by telegram to Honey Grove to officiate at the church for the burial of Albert A. Smith was born in Welcox County, Alabama, July 12, 1847 and died April 16, 1890 of pneumonia.  St. Mark's Church was crowded to its utmost capacity by those anxious to testify their respect for this good man, useful citizen and earnest Christian.

On May 13 Bishop Garrett appointed James E. Breckeen as warden, R. J. Thomas as secretary and Eugene Eberle as treasurer.  The rest of the 7 man vestry would be elected by the congregation.

On June 22, 1892 Bishop Garrett went to Honey Grove and baptised Alice Gertrude Rogers and May Dtrelzel Ryan and then confirmed them.  On that same day Bishop Garrett united in the church Harry Martain Hill and Elizabeth Stobaugh in marriage.

On November 2 Bishop Garrett went to the Church on St. Mark the Evangelist and united in marriage Eugene Gustave Eberle and Anne Isabel Ryan.

On February 4, 1894, Bishop Garrett went to Honey Grove and said Evening Prayer and Preached.  On February 5 he administered Holly Communion at St. Mark's.

​On August 21, 1894, Bishop Garrett appointed Mr. Stonewall Gerolte as clerk for the Church of St. Mark the Evangelist.

On February 3, 1907, Bishop Garrett preached in St. Mark's and on February 4 he administered communion.

On January 23, 1910, Bishop Garrett preached - no candidates for confirmation.

In 1913, there was no visit by Bishop Garrett - candidates for confirmation went to Paris. 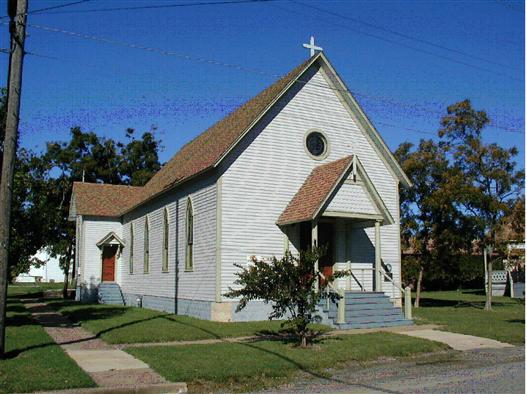