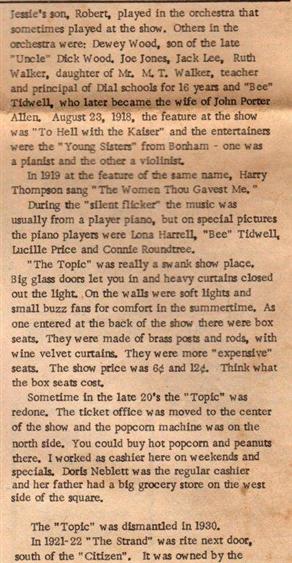 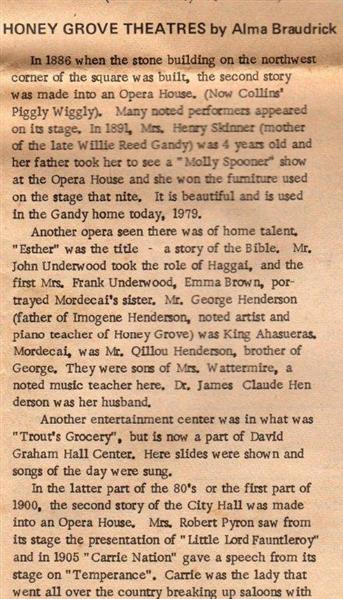 In 1886 when the stone building on the northwest corner of the square was built, the second story was made into an Opera House (Now Collins' Piggly Wiggly).  Many noted performers appeared on its stage.  In 1891, Mrs. Henry Skinner (mother of the late Willie Reed Gandy) was 4 years old and her father took her to see a "Molly Spooner" show at the Opera House and she won the furniture used on the stage that nite.  It is beautiful and is used in the Gandy home today, 1979.

Another opera seen there was of home talent. "Esther" was the title - a story of the Bible.  Mr. John Underwood took the role of Haggai, the the first Mrs. Frank Underwood, Emma Brown, portrayed Mordecai's sister.  Mr. George Henderson (father of Imogene Henderson, noted artist and piano teacher of Honey Grove) was King Ahasueras.  Mordecai was Mr. Qillou Henderson, brother of George.  They were sons of Mrs. Wattermire, a noted music teacher here.  Dr. James Claude Henderson was her husband.

Another entertainment center was in what was "Trout's Grocery," but is now a part of David Graham Hall Center.  Here slides were shown and songs of the day were sung.

In the latter part of the 80's or the first part of 1900, the second story of the City Hall was made into an Opera House.  Mrs. Robert Pyron saw from its stage the presentation of "Little Lord Fauntleroy" and in 1905 Carrie Nation gave a speech from its stage on Temperance.  Carrie was the lady that went all over the country breaking up saloons with her hatchet.  About fifteen saloons were in business around our square at that time.  Cade Lee was city marshall and Dan Brown was a policeman.

A place called "The Nickelodeon" was owned by Bob Bryan, and located about where "The Royal Cleaners" are today.  The bass voice of Harry Thompson, and the tenor voice of Grady Ragsdale could be heard here as the slides were shown.  Harry lives here today (1979) and is 94 years old.  Special organ music was furnished here by Lucille Price, daughter of P. M. Price.  The Price Home is where Kenneth Witcher lives today.

Next was a place called "The Airdome" built across east of the City Hall by Mr. Bob Bryan.  There was no building - just a stage and the people sat out in the open.  Thus, the name "Airdome."  This was around 1910-1912.

Mr. Bryan worked on the Santa Fe, then became the expressman, and then bought a livery stable from Charlie Leeman in 1899.  As a child I played up and down in front of this stale because my daddy worked down the street at a market near the Vaughan Hotel.  Shorty Sneed was one of the stable hands and he told us kids many stories as we sat with him in front of the stable.  Mamma one time rented a buggy from the stable to go see my grandma that lived on Michigan Prairie.

On south 6th street was a theatre called "The Happy Hour," and it was located in the building where Alonzo Lindsey had his shoe shop.  It had two power projectors that had to be hand cranked and Joe Jones (now of Richardson) rewound the film by hand cranks for the operator to run.  Joe is a brother of Miss Ruth Jones that lives on East Market Street.  Music for the theatre was from a Wurlitzer organ that had full orchestration.  It was a wonderful instrument.  The admission price 5 and 10 cents.

About 1914-15 "The Bon-Ton" was opened on the south side of the square in the buildings now owned by John Black.  The office sat in the middle of the show front, and big, heavy curtains were just inside the doors, because the screen was at the front of the building.  I remember sitting on about the second row in the show because it was so dark and I was scared to go farther back.

There was a show named "The Home" that was also in operation at this time.  It closed Oct. 1918 to be "fumigated and thoroughly cleaned."  This was done because of the flu epidemic.  People were dying every day from the flu.  It wiped out entire families sometime.  It reopened Dec. 7, 1918.

The silent movie was such a big hit Mr. Bryan bought a show in Sherman, moved it to Honey Grove and called it "The Topic."  It was where "Loves Mfg." is today (1979).  McKinney Hardware was on the south side and "Doc" Wilson Drug Store on the north side.  The box office was back off the street in the N. corner.  Mrs. Jessie Phillips, sister of Mr. Bryan was the cashier.  One of the early fire engines was named "Captain Phillip" after Mrs. Jessie's husband who was a Rear Admiral in the U.S. Navy on the battleship Texas.  Mrs.Jessie's son, Robert played in the orchestra that sometimes played at the show.  Others in the orchestra were:  Dewey Wood, son of the late "Uncle" Dick Wood, Joe Jones, Jack Lee, Ruth Walker, daughter of Mr. M. T. Walker, teach and principal of Dial schools for 16 years and "Bee" Tidwell, who later became the wife of John Porter Allen.  August 23, 1918, the feature at the show was "To Hell with the Kaiser" and the entertainers were the "Young Sisters" from Bonham - one was a pianist and the other a violinist.

In 1919 at the feature of the same name, Harry Thompson sang "The Women Thou Gavest Me."

During the "silent flicker" the music was usually from a player piano, but on special pictures the piano players were Lona Harrell, "Bee" Tidwell, Lucille Price and Connie Roundtree.

"The Topic" was really a swank show place.  Big glass doors let you in and heavy curtains closed out the light.  On the walls were soft lights and small buzz fans for comfort in the summertime.  As one entered at the back of the show there were box seats.  They were made of brass posts and rods, with wine velvet curtains.  They were more "expensive" seats.  The show price was 6 cents and 12 cents.  Thank what the box seats cost.

Sometime in the late 20's the "Topic" was redone.  The ticket office was moved to the center of the show and the popcorn machine was on the north side.  You could buy hot pop and peanuts there.  I worked as cashier here on weekends and specials.  Doris Neblett was the regular cashier and her father had a big grocery store on the west side of the square.

In 1921-22 "The Strand" was rite next door, south of the "Citizen."  It was owned by the "Griffith Amusement Company."  It was bought by Mr. Killough, then sold to Mr. Gill.  Mr. Gillsold to Bob Lilly and John D. Mitchell of Commerce and Doug Mitchell was made manager.  Miss Edna Braudrick worked for Mr. Gill and Mr. Lilly for many years.  Feb. 24, 1930 sound pictures were brought to the Strand and on Apr. 4, 1930 an all singing "Showboat" was shown.  1932 an automatic changemaker was installed, making it easier for the cashier.  Mr. Lilly sold the shoe to Mr. May and Mr. May sold it to Mr. Frick.

Many years this show brought pleasure to Honey Grove, and many small communities, but it closed its doors in 1943.

At the time the Topic and Strand were being run the Negroes had a show on S. 6th St called "The Lincoln."  It ran the same film as the Strand.  "Bub" Nails (Negro) was the operator.  He would show a reel, run to the Strand, get another reel, run back and show it.

One operator who worked for Bob Bryan was Jewel Vinyard.  His mother and father owned the brick house that Bloys Parkhill lives in now.  They built it themselves.  Mrs. Vineyard had hair that touched the floor when she sat in a  chair.  Never have I seen hair like this before or since.

About 1940 "The State Theater" was opened and Joe Jones was its manager.  It was where the office of Dr. Poimboeuf is today.  I remember this one well as my ticket won a Westinghouse mixer there one night.  The "State" was one of Tri State Theatres.  Mr. B. R. McLendon was the owner.  It closed about 1950.

Mr. McLendon then built what we thought we would never have, the "Grove" Theatre.  It was located where Liz's Beauty Shop is.

It was one of the best, a show place, valued at $10,000.  Joe Jones was also manager of this Tri State show.  The huge theatre seated about 800 people and many times I saw it filled.  Nine years we enjoyed this wonderful place but it burned in  May, 1959.

The show had closed around 10:30.  About 1:30 black smoke was seen coming from the ventilator near the roof, by the night policeman.  The flames had burst thru the roof by the time the truck got there.  Bonham and Paris departments dispatched trucks to help us, but it burned to the ground.  Paul James opened his "City Cafe" to serve coffee and drinks to the firemen as they fought to control the fire.

In the early 70's "The Grove" marquee was taken down and moved to the Wood building on the northwest corner of the square.  Here Mr. Voyer built a lovely modern show for the townspeople at the cost of $26,000.  I, for one, didn't miss a show, but to my sorrow it closed.  The Fry family then ran it for a year or so, then Mr. Frank Shirley had shows there on weekends, and now, 1979, it is owned by Al and Sherry Berkes.  Mr. and Mrs. Berkes are owners of several show places over the country. 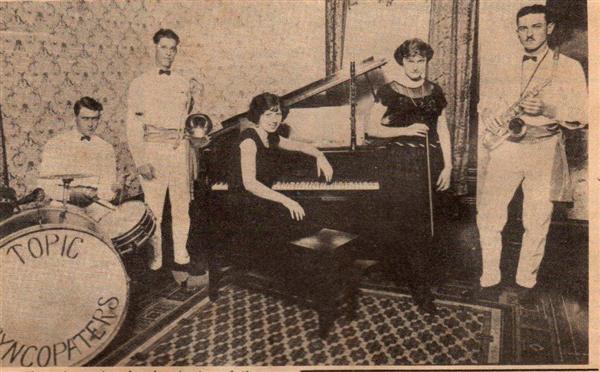