It was only eight years after the close of the War Between the States that the first railroad train came puffing into Honey Grove over the Texas and Pacific line, which had been built westward from Texarkana.

It is recorded that when the first train came into town there was a huge crowd to welcome the "iron horse" and its carriages.  Most of those who witnessed the train's arrival had never before seen a locomotive or heard its whistle.

Naturally, the arrival of the railroad gave great impetus to the development of Honey Grove since transportation of supplies into the community was speeded up and cotton, along with other revenue crops could be more easily marketed.

In the early days the only outlet to the rest of the world was over the rough, poorly-built dirt roads by ox teams.

Later the M. K. & T. Railroad was constructed to Caddo, I.T. [Indian Territory], and for sometime Honey Grove got her goods from that place.

The T. & P. line's completion to Honey Grove was celebrated with a huge picnic on Bullard's Creek in which residents from that section between Bonham and Honey Grove took part.  It is said that the engineer, wanting to have a little fun at the expense of the uninformed populace, told the crowd to stand back that he wanted to turn the train around, and thinking the train would be turned around on the ground the onlookers fell back in a rush.

Terminus of the T & P line was at Honey Grove for two years, but in 1875 it was completed to Blossom where crews from and west met.

​The first Santa Fe train reached Honey Grove on January 1, 1887 about 8:30 p.m.  The road was under contract to build into Honey Grove by this date for a bonus of $20.00.  In order to get here on time the train had to run on a roadway with crossties very wide apart, therefore the speed was greatly reduced.  Old-timers recall that the time between Ladonia and Honey Grove was about two hours. 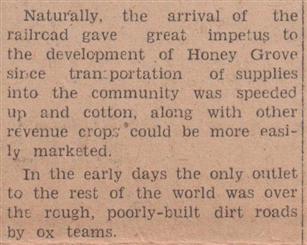