Vineyard Grove Baptist Church - Membership photo at Vineyard Grove Baptist Church probably in 1968.  Back row, left to right: Dorothy Witcher, her mother, Claude Witcher (can only see the top of her head), Mary Prickett, Mildred Neely (only the top of her head), Lottie Ramsey (the next two people, only see the top of their heads), the tall lady is not identified, Margaret Loschke, Jake Prickett (standing next to the post), Martha Jane Conyers, the next three gentlemen (only see the top of their heads), and Earl Conyers.  Front row, left to right: Ruby Conyers, the young lady holding a baby is possibly Judy Reed, Mrs. Maude Ferguson, Mrs. Charlie Cornelius, Anna Beth Webb, Mr. Russell Davis, Mrs. Choice Moore and Choice Moore (visitors), and the little girl standing in front of Mrs. Ferguson is Melinda Conyers. 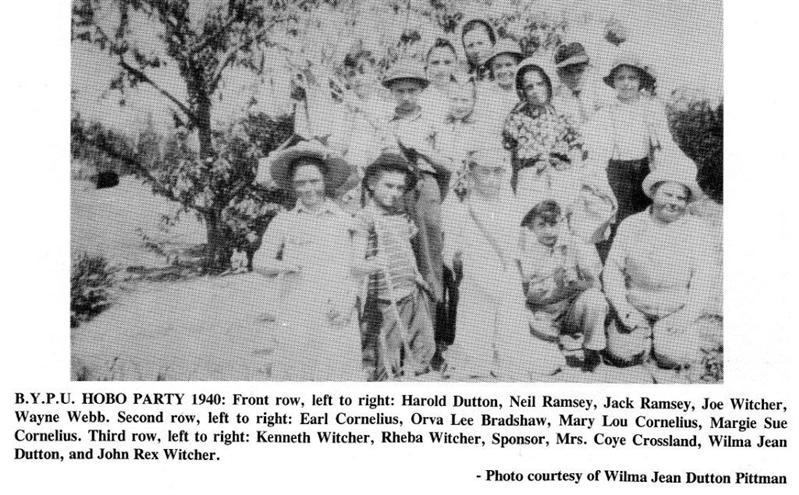 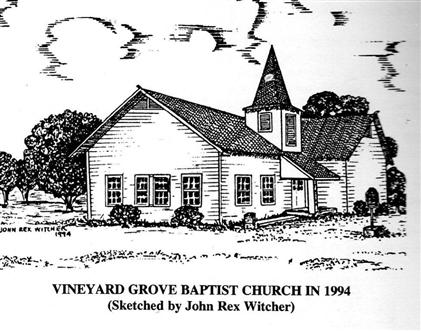 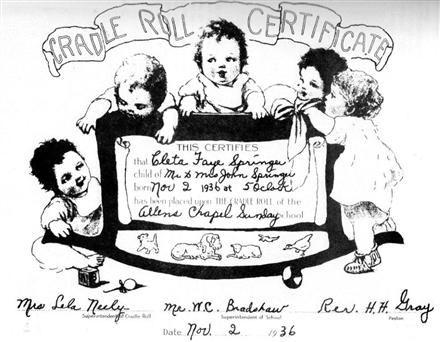 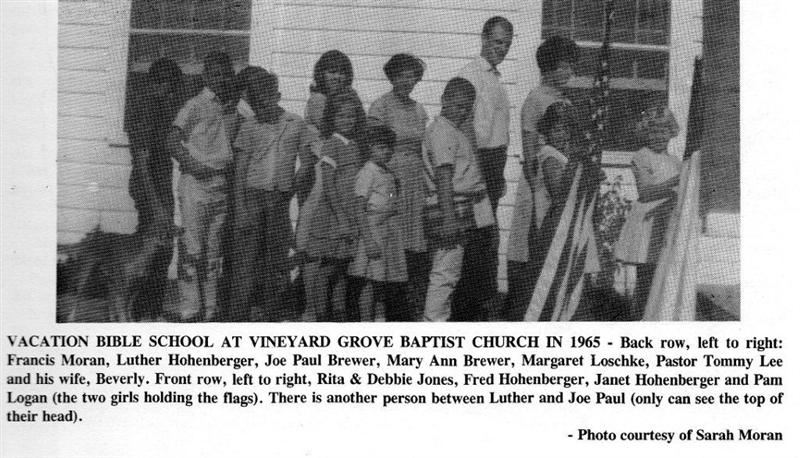 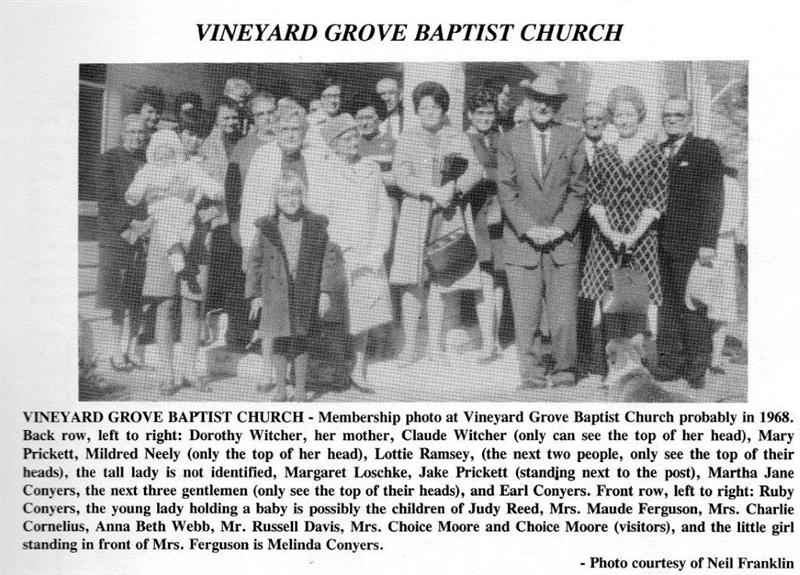 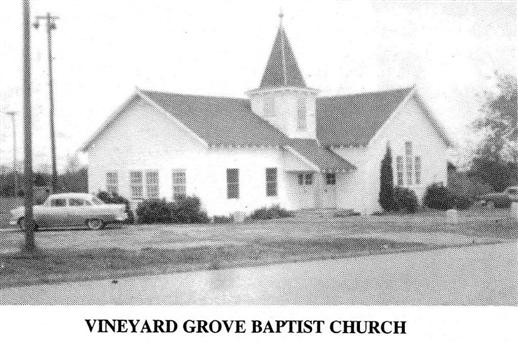 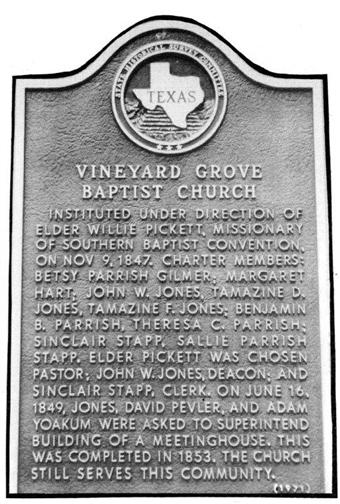 Drawing, photos and article from the Allens Chapel Scrapbook

On November 9, 1847, the United Baptist Church was instituted under the direction of Elder Willie Pickett, Missionary, laboring under the patronage of the Southern Baptist Convention for the home missions.  At a meeting in 1853, the name was changed to Vineyard Grove Baptist Church.

The organization was perfected by the following who subscribed their names to the declaration of faith prepared for the occasion:  Betsy Parrish Gilmer, Margaret Hart, John W. Jones, Tamazine D. Jones, Tamazine F. Jones, Theresa C. Parrish, Sinclair Stapp and Sallie Parrish Stapp.  When the church was organization, Elder Pickett was chosen to be Pastor, John W. Jones, deacon, and Sinclair Stapp, Clerk, and in May 1851 he was made treasurer also.  There had been no treasurer previous to that time.  Their proceedings were held in a log school house at Allens Chapel where services were sometimes held, and at other times at residences of members until a church house was built at Vineyard Grove, about two miles west of Allens Chapel school house in 1853.  (Note: The church was first built where the Vineyard Grove Cemetery is located today.)

According to records the church was built by a Baptist preacher named Brisco.  Later a new building was built north of the old school building (this land was sold to the church by Newt and Ruth Ramsey) where it stood until 1996, when it wad disbanded and torn down.  It retained the name Vineyard Grove when the new church was built because one of the charter members of that church was still living.  Vineyard Grove Baptist Church was recorded as the oldest Baptist church in Fannin County.  In 1971 a historical marker was placed at the church stating when it was built and completed.  The marker still stands today, 1997, marking the location of the church.

When the Allens Chapel Methodist church wad disbanded about 1916, the church building and fixtures were donated to the Baptist church at Allens Chapel which was completed and dedicated in 1934, continuing under the name, Vineyard Grove Baptist Church.

For many years the Vineyard Grove Baptist Church was served by pastors who lived elsewhere and came for the Sunday Service.  In 1952-53, the church built a small parsonage just a little south of the church for the pastor and family to come on Friday and stay through the weekend.  The parsonage was used for several years and then stood vacant for a long period of time before it was moved in 1992 or 1993.

Vineyard Grove Baptist Church served the community for well over one hundred years before the membership decreased to about three active members in 1986.  Those members were Marvin Loschke, Ruby Conyers and Catherine Witcher.  These few members still held Sunday School every week without the leadership of a pastor until 1990.  Then in 1992 they were forced to make the painful decision to disband.  These members attend church at other Baptist churches in the Honey Grove area.  In 1995, due to the poor condition of the church, they made their second decision to tear down the building, a landmark of the community for many, many years.  it was a sad occasion, but one of necessity.

In 1993, when the community decided to build a new community center, the membership gave $2500 of the funds left in the church treasury to help start the building fund to build the new center and in 1996, another donation of $2000 was given to the Allens Chapel Building Fund to go toward the debt of building the new center.

When the church building was torn down, the pulpit, along with the folding chairs and tables, and the piano which had already been moved to the community center, were donated to the new center.  At right is a photo of the historical marker and on following pages [below] are of a Cradle Roll Certificate, which was given to new babies born to the church membership families during that period of time, a group of children attending Vacation Bible School, a B.Y.P.U.  Hobo Party in 1940, and a group membership photo (year unknown).