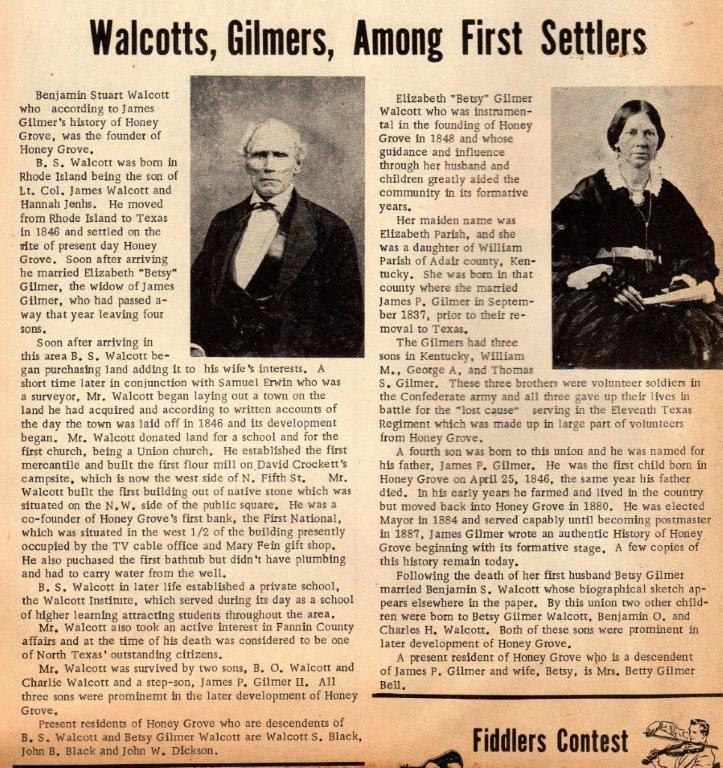 B. S. Walcott was born in Rhode Island being the son of Lt. Col. James Walcott and Hannah Jehns.  He moved from Rhode Island to Texas in 1846 and settled on the site of present day Honey Grove.  Soon after arriving he married Elizabeth "Betsy" Gilmer, the widow of James Gilmer, who had passed away that year leaving four sons.

Soon after arriving in this area B. S. Walcott began purchasing land adding it to his wife's interests.  A short time later in conjunction with Samuel Erwin who was a surveyor, Mr. Walcott began laying out a town on the land he had acquired and according to written accounts of the day the town was laid off in 1846 and its development began.  Mr. Walcott donated land for a school and for the first church, being a Union church.  He established the first mercantile and fuilt the first flour mill on David Crockett's campsite, which is now the west side of N. Fifth St.  Mr. Walcott built the first building out of native stone which was situated don the N.W. side of the public square.  He was a co-founder of Honey Grove's first bank, the First National, which was situated in the west 1/2 of the building presently occupied by the TV cable office and Mary Fein gift shop.  He also purchased the first bathtub but didn't have plumbing and had to carry water from the well.

B. S. Walcott in later life established established a private school, the Walcott Institute, which served during its day as a school of higher learning attracting students throughout the area.

Mr. Walcott also took an active interest in Fannin County affairs and at the time of his death was considered to be one of North Texas' outstanding citizens.

Mr. Walcott was survived by two sons, B. O. Walcott and Charlie Walcott and a step-son, James P. Gilmer II.  All three sons were prominent in the later development of Honey Grove.

Present residents of Honey Grove who are descendents of B. S. Walcott and Betsy Gilmer Walcott are Walcott S. Black, John B. Black and John W. Dickson.

Elizabeth "Betsy" Gilmer Walcott who was instrumental in the founding of Honey Grove in 1848 and who guidance and influence through her husband and children greatly aided the community during its formative years.

Her maiden name was Elizabeth Parish [Parrish], and she was a daughter of William [Parrish] of Adair county, Kentucky.  She was born in that county where she married James P. Gilmer in September 1837, prior to their removal to Texas.

The Gilmers had three sons in Kentucky, William M., George A and Thomas S. Gilmer.  These three brothers were volunteer soldiers in the Confederate army and all three gave up their lives in battle for the "lost cause" serving in the Eleventh Texas Regiment which was made up in large part of volunteers from Honey Grove.

A fourth son was born to this union and he was named for his father, James P. Gilmer.  He was the first child born in Honey Grove on April 25, 1846, the same year his father died.  In his early years he farmed and lived in the country but moved back into Honey Grove in 1880.  He was elected Mayor in 1884 and served capably until becoming postmaster in 1887.  James Gilmer wrote an authentic History of Honey Grove beginning with its formative stage.  A few copies of this history remain today.

Following the death of her first husband Betsy Gilmer married Benajmin S. Walcott whose biographical sketch appears elsewhere in the paper.  By this union two other children were born to Betsy Gilmer Walcott, Benjamin O. and Charles H. Walcott.  Both of these sons were prominent in later development of Honey Grove.

A present resident of Honey Grove who is a descendent of James P. Gilmer and wife, Betsy, is Mrs. Betty Gilmer Bell.