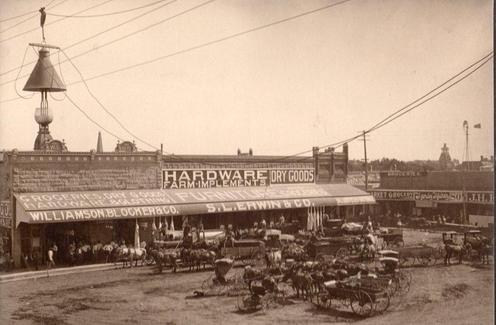 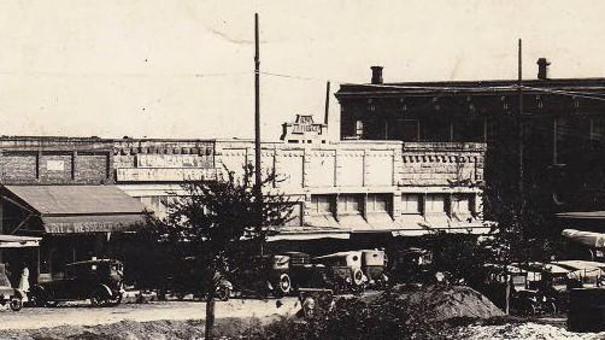 4. Cross 5th Street.  The first major business establishment was built on the corner of what is now 5th and Main by B.S. Walcott.  This became known as the Walcott Block.  In 1886 it housed F. C. Fisher & Sons (Hardware, and Manufacturers of Tinware, #26 on the map below) and B. F. Barnum (Furniture Dealers, #27 below). 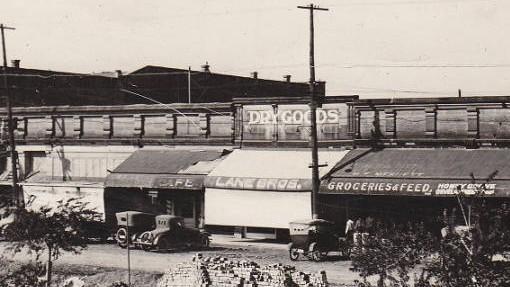 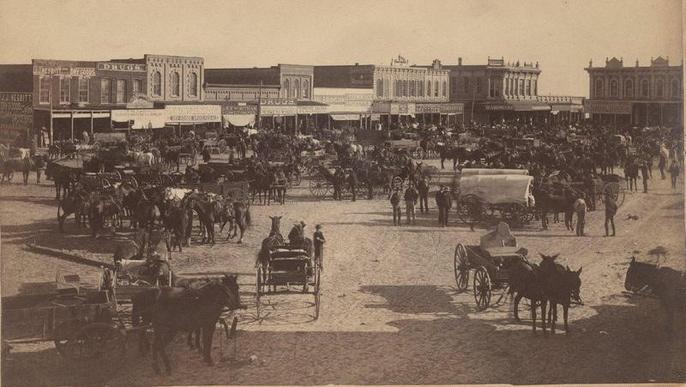 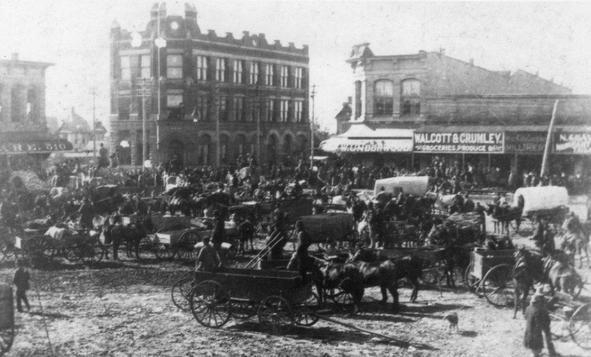 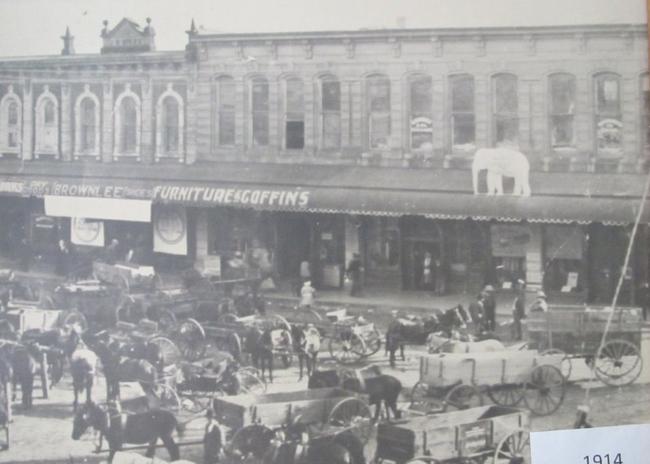 10.  Smith Feed & Seed occupies the beautiful Erwin Building at the corner of 6th and West Market.  It was built in 1883 by Mr. Young Burgher, with the original use as a hardware store.  Go inside the store to admire the building and its inventory.  It is constructed of stone from the Floyd Quarry, which was located three miles south of town.  Stone from the Floyd Quarry was used for the old Merchants Exchange Building in Dallas and the historic Red River County court house in Clarksville.

Later that space was occupied by the White Elephant Store.   And what was needed in every town, the coffin maker. 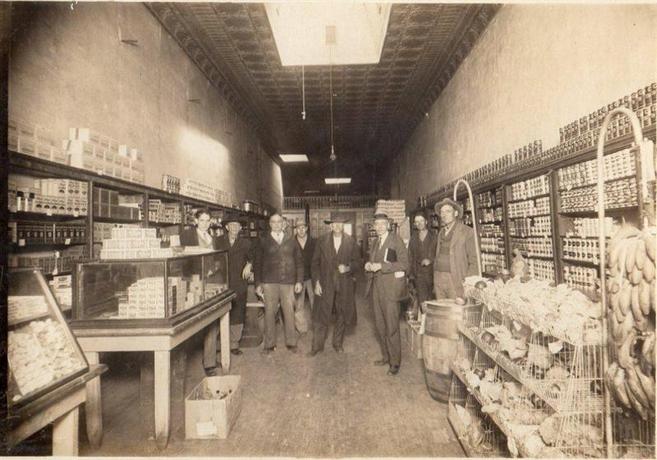 A Walking Tour of the Honey Grove Square

7. On the north side of the corner of 5th Street and West Market is what is known as the Marcom Building.  A building is shown on this lot in the first Sanborn map for Honey Grove, which is dated 1885.  In 1885 the building covered only half of the block and is designated as “Harness.”  On the 1888 Sanborn map the building covers the entire lot, as today.  The bottom floor is a General Store and the second floor was “Cotton Sample Room and Office. In 1892 the bottom floor is a general store and the 2nd story is listed as "Lodge."  The next change is in 1909, when the building has been combined with the building directly to the north, with an interior door between the two buildings.  It is designated as a General Store selling groceries and dry goods and also has the following notation:  "Clo. & B. & S."  Significantly, the front of the building has been changed so that the entry is at the corner and is at an angle to street (similar to the entry for Smith's Feed and Seed today).  The next map is in 1921, when the entire building is a bank. An undated old photo we have of the Honey Grove Square shows the building with an awning and the name "W. Underwood." 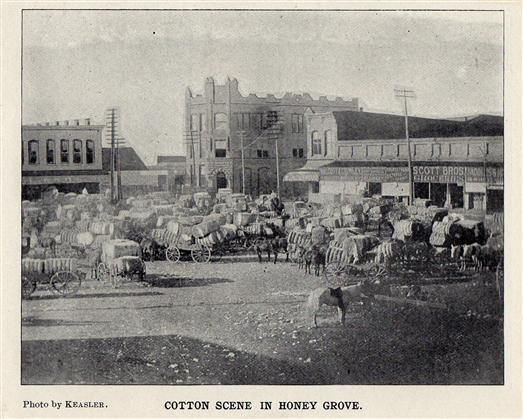 1.  Begin the walking tour on the Northeast corner of the Square.  Here you will find the building that once housed the Planters National Bank.

13.  Now take a look back at the Square with our lovely little post office building.

The Post Office building was completed in 1920.  Before the building of the post office, the large square was used for market days but also for community events.  The photo below shows a May Pole celebration on the Square. 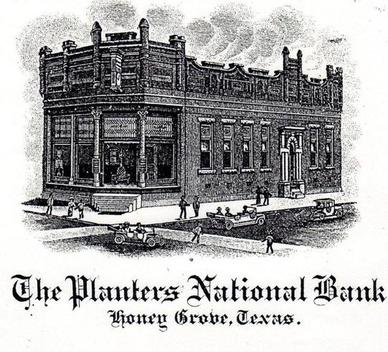 The building currently occupied by Eagerly Sought was once the State Theater (a movie theatre).

The building that most recently housed Thompson Auto Parts was once the Fritz Messerer store  (see photo above).  Fritz Messerer emigrated from Germany when he was about 18 years old, in about 1883.  He started with nothing but became a leading merchant and land owner in Honey Grove.  He was engaged in many businesses, including owning an ice plant.

The photo below shows the inside of the Messerer Store, which is similar to many of the other businesses on the Square.

During cotton season the Square was full of wagons with bales of cotton, and the farmers finally had money to spend. 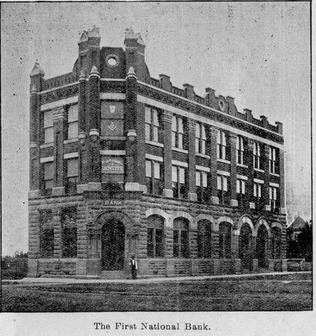 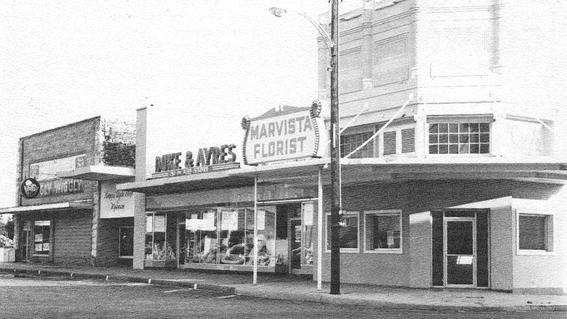 Below is an early photo of the Smith Hotel.

2.  The Grove Theater opened in the early part of 1950 in current location of Small Town Charm.  The Grove was a magnificent theater, Honey Grove’s most plush showplace that seated almost 800 people, with the main floor having over 700 seats and the balcony holding about 150 people.  The theatre was L-shaped, with the entrance on Maine between Duke and Ayes and Piggly-Wiggly, and the auditorium arranged east and west.   Citizens from surrounding towns would come to Honey Grove in Saturday’s for a movie, and there often was a packed house.  The Grove was destroyed by a fire in late May 1959.

Take a walk around our Honey Grove Square and imagine it in its previous days.

The wealth produced from farming and business enterprises also supported the first class educational institutions, churches, social and fraternal organizations, and, for some, beautiful homes and a lavish lifestyle.

Honey Grove prospered through World War I and into the id-1920s.  At some point the decline in the farming population weakened the economy and by the 1970s the Square no longer teemed with life.  However, we still have many beautiful homes and many of the buildings on the Square remain.

So take this walking tour and consider bygone days.

First, think about the Square before the lovely Post Office was in the center.  In the 1880s a smaller square was enlarged to make room for the growing number of businesses and all the horses, mules and buggies that would occupy the square on a trading day.

The building with 1916 at the top was originally built in 1883, and once held a saloon.  At one time there were many saloons in town.  Prohibition closed the saloons in 1914.  Currently this building houses Germania Insurance.

12.  Cross Main Street to the entrance to the Bertha Voyer Memorial Library.

The second retail store in Honey Grove was built on this location in 1854.  The currently building was constructed in the early 1900’s and has housed many retail businesses, including a drug store and a millinery (women’s hat) store, and a restaurant.

It now houses the Bertha Voyer Memorial Library, which was begun in the 1960s and provides library services to Honey Grove and the surrounding rural communities. 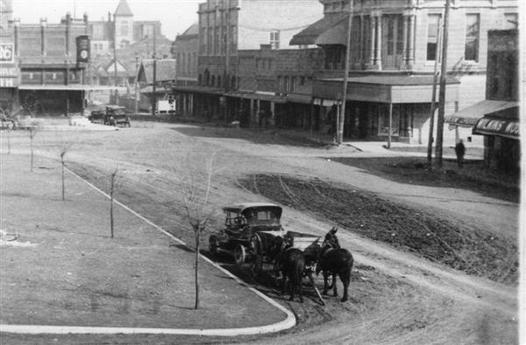 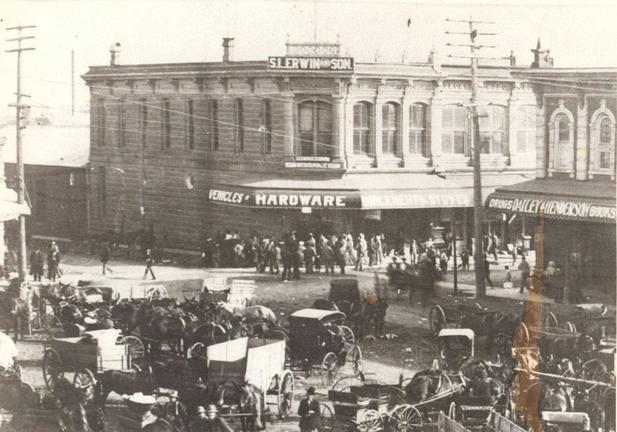 The Planters National Bank was organized in 1889.  By October 1931 the Planters National Bank was in receivership, and the building was sold to S. B. Evans, who opened a grocery store there.    When Mr. Evans moved his grocery store there, he lowered the first floor and did away with the steps.  He also created a second floor.   After the grocery store closed, there were a variety of businesses in the location, including a flower shop, an ice cream parlor and several restaurants.  And it was also the first location of the Bertha Voyer Memorial Library.  Now the building houses The Vault.  A photo of the Evans Grocery is below. 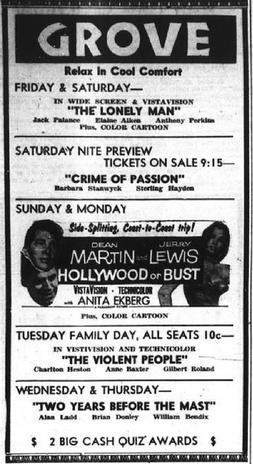 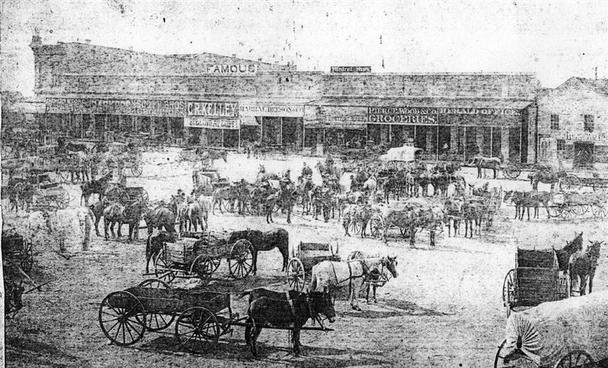 5.  Cross Main Street and walk south.  At the location of a current building which once served by a theatre was the Smith Hotel, built in 1856.  The Smith hotel, a 2 ½ frame building, is on the far right in the photo below.  The Smith Hotel also served as the stage coach stop and the post office.

3. Later the north side was occupied by Duke & Ayres, a five-and-dime store, and the Piggly Wiggly grocery. 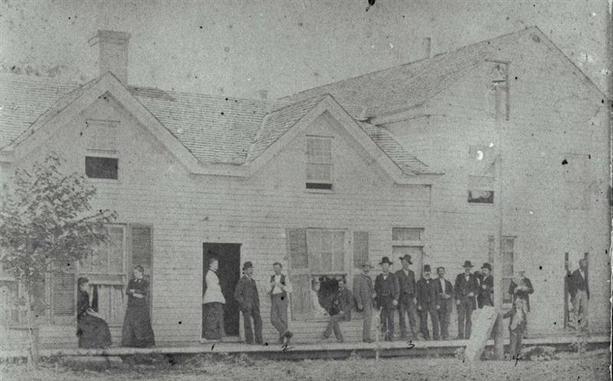 9.  Below is a photo of the early buildings on the south side of the Square.  Note that the building on the right was the first location of the First National Bank.

At some time the back portion of the building was converted to doctor's offices and later the second floor was a medical clinic.  An article in the February 16, 1961 Honey Grove Signal-Citizen says that almost 1,000 babies in Honey Grove were delivered in this building beginning in 1940.  There are many residents of Honey Grove today who were born in that building, or whose parents were born there.

The downstairs front part of the building was for many years Clayton's Drug Store, which had a soda fountain.

8.  Across the street on the southwest corner of 5th and Market is the imposing First National Bank building. The bank was organized in 1883, the corner was purchased by the bank in 1891, with the building constructed in 1892 by Jacob Fein.  It was remodeled in 1931 and a crowd of three to four thousand persons attended an open house held on a Saturday evening. 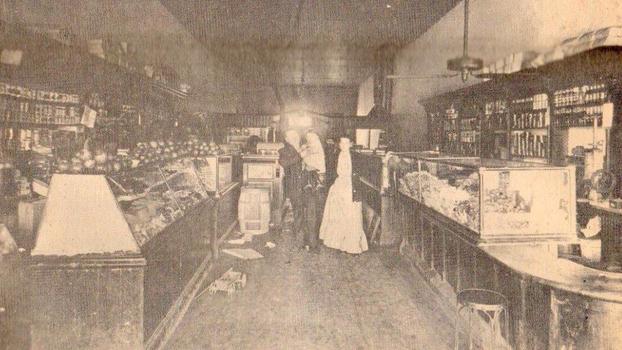 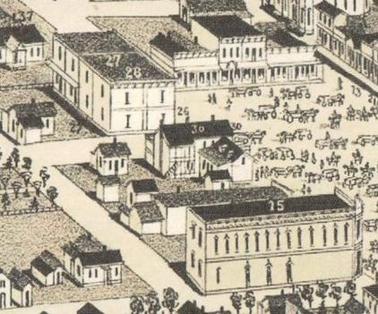 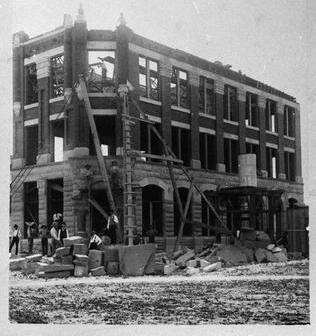