Paris News Service--1965
Roxton, Texas—Recent action at the quarterly conference of Roxton and Whiterock Methodist Churches, effecting a merger of the two congregations, brought to a close the 113-year history of Whiterock as a separate church unit.

The 35 members comprising its active congregation will transfer all activities to Roxton, the pastor, the Rev. Thomas Price, announced at Sunday service here.

On Sunday, Aug. 8, 1952, Whiterock, three miles south of Petty, celebrated its centennial withan all-day homecoming at the building erected in 1945 on the site donated in 1881 by Robert Ragsdale.

Prior to the earlier date, the church had held its services in the log building in use since 1852, where now is Hickory Grove Cemetery, a mile southeast of the present church. Five years after the new site first was occupied, a wind storm demolished the building and the one erected to replace it. It served until the present structure was decided upon.

Here, the church’s 95th anniversary was celebrated a year after, and its centennial in 1852.  Honored at the 100-year program of the congregation and Mrs. H.G. Rutherford, a 53 year member, besides our generation descendants of the Ragsdale who gave the ground—the late Mr. and Mrs. W.T. Irion, their son, Robert Irion and his daughter from Paris.

The 150 or more persons attending came from all parts of Texas, and others from Oklahoma and Kansas points, and included several former pastors, and many former lay officials, County Judge, Joe Hammack of Paris welcoming the visitors.

The Rev. B.H. Terrell was then pastor, the Rev. H.A. Hanke having served the church at the time of re-building and assisting in raising the $2000.00 needed for the undertaking.

What disposition will be made of the 21-year-old church structure had not been officially announced. 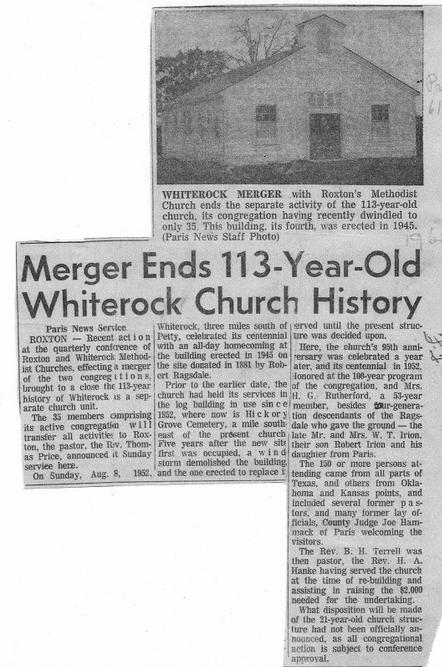 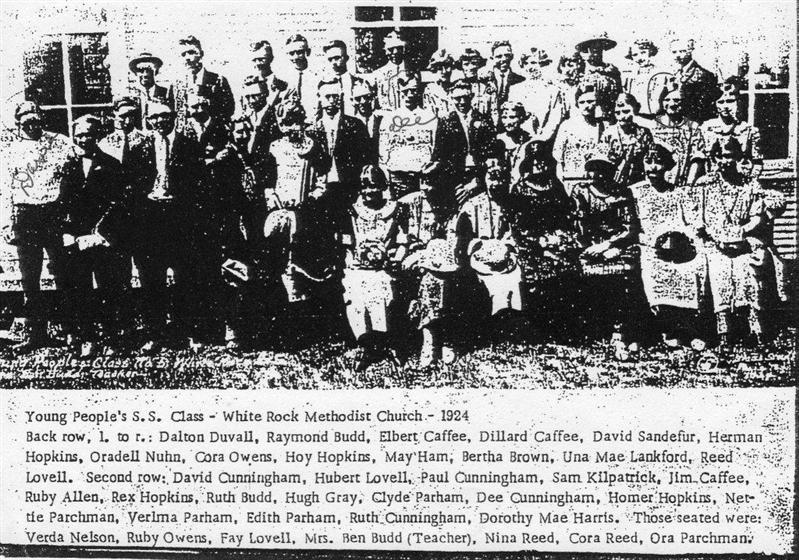 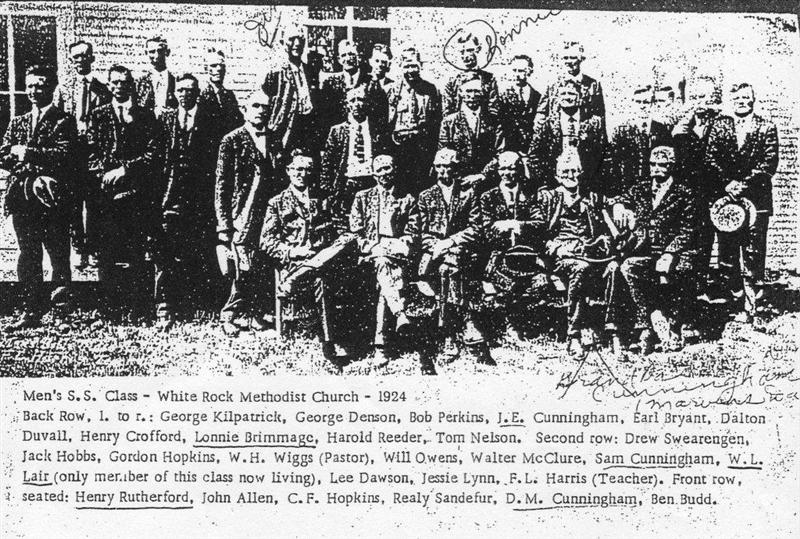 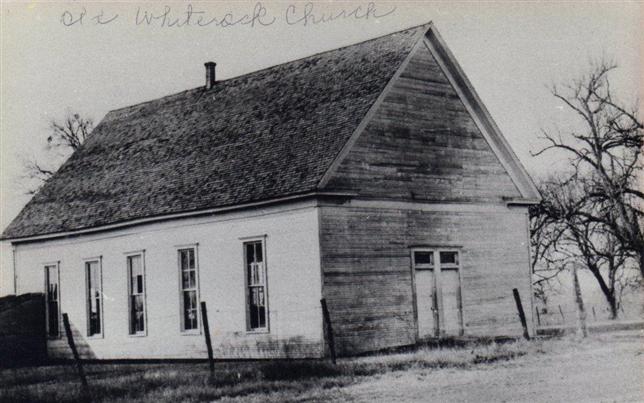 Another photo of the church built in 1887.

The church built in 1887, with the tabernacle in the background.

Per the article, the Whiterock Methodist Church, located 3 miles southeast of Petty, was organized in 1852.  The first building was of logs on the site of Hickory Grove cemetery.  In 1881 a second building was erected on the present site and it was destroyed by a windstorm in 1886, but was rebuilt in 1887.  that building was used until a new building was completed in 1945.

Another article says that the land for the church built in 1881 was donated by Robert Ragsdale.  In 1952, at the centennial celebration, descendants of the Ragsdale familly and Mrs. H. G. Rutherford, a 53-year member, were honored.  Over 150 person attended.

​Thanks to Claude Caffee for providing these materials. 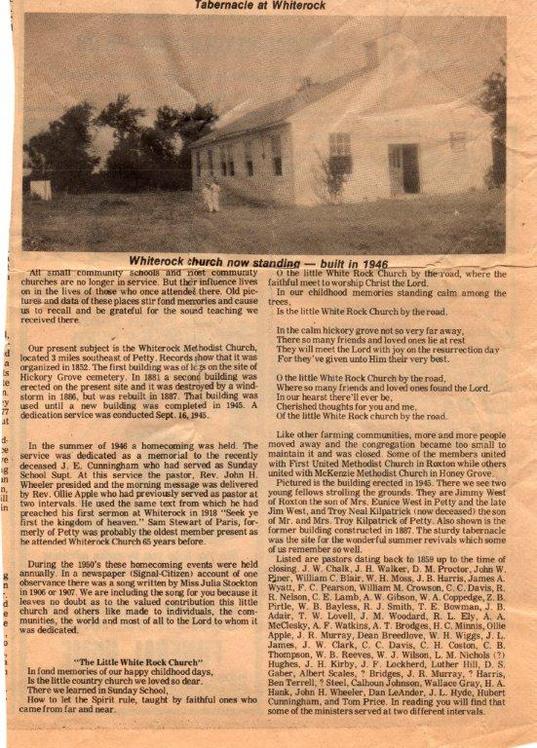 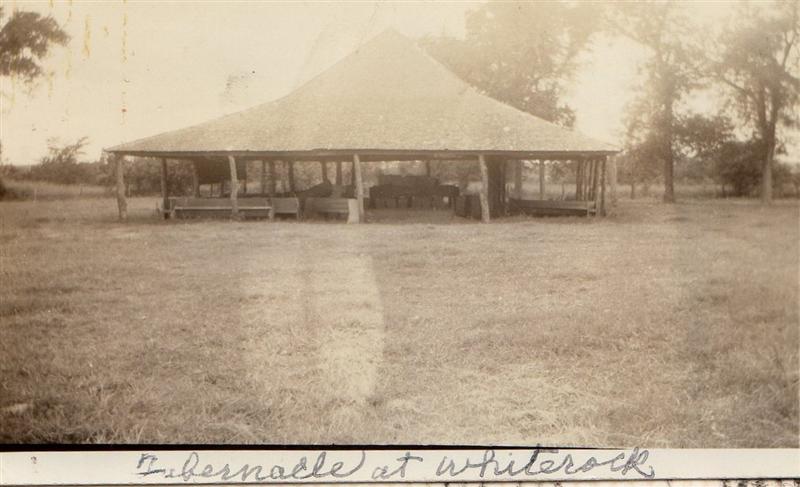 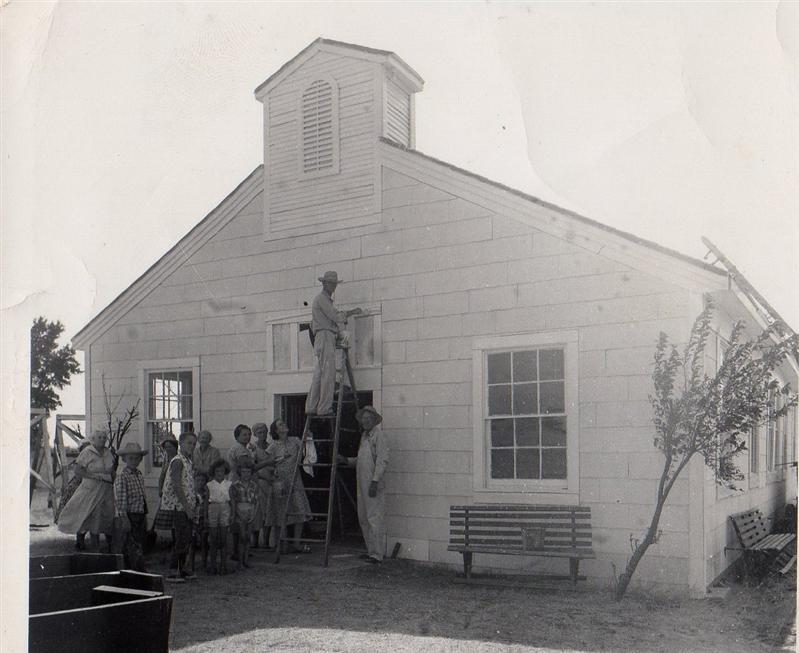 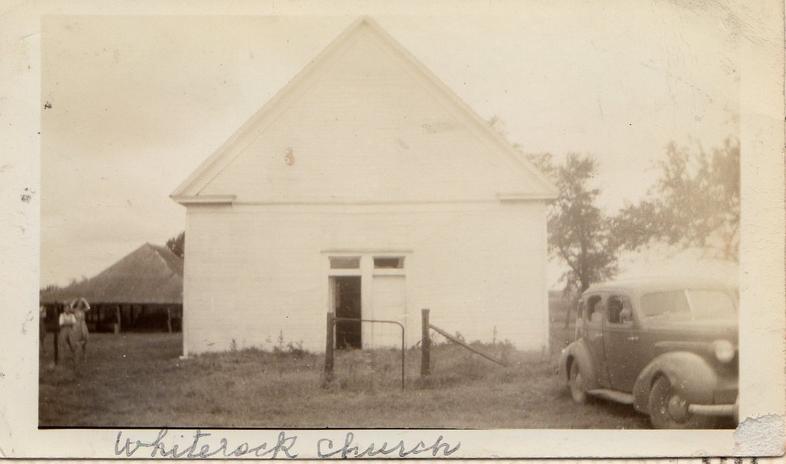