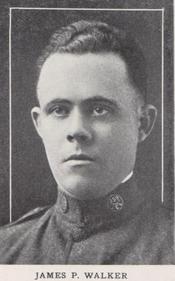 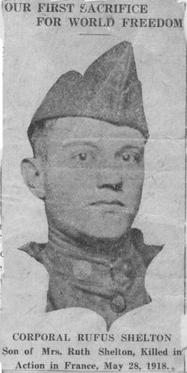 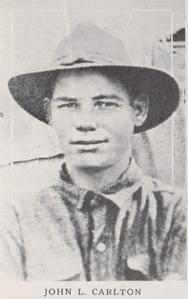 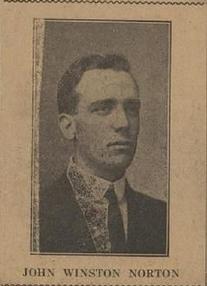 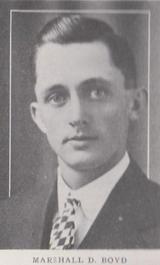 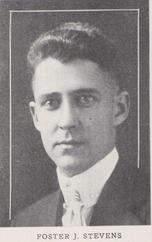 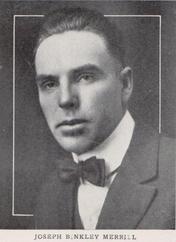 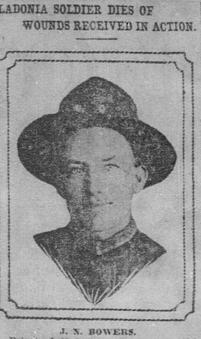 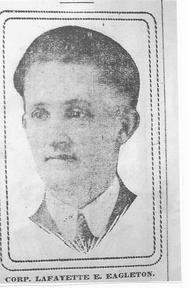 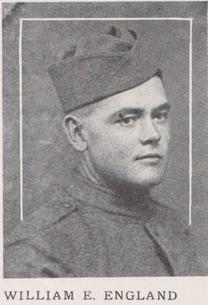 Read about the German citizens of the Honey Grove area during World War I HERE.

Read about the contributions of the Black citizens of Honey Grove in World War I.

See a list of boys serving from the first draft.

Servicemen from the Honey Grove Area Killed in World War I

Includes those who died while in service, even if not in Action.  These lists are under development.  Please let us know if you have names to be added.  Click on the names in red for more information.
Bowers, John N.  Son of Mr. and Mrs. W. W. Bowers.  Reared in Fannin County.
Wounded at the battle on the Champagne front and later died as a result
​of this wounds.
​
​
Boyd, Marshall  Son of W. L. and Mary Boyd, he was raised and educated in
Ladonia.  He never saw the firing line because he contracted pneumonia
and died at Glasgow, Scotland, and was buried there..
​Information and photo from History of Texas World War Heroes.
Carlton, John Lee
This Windom boy was sent overseas for duty in France in July 1918.  In September
he was stricken with influenza, from which pneumonia developed,
and he died at Valdehen, France, October 3, 1918.
​
​Cantrell, John Lee  According to the obituary in the Honey Grove Signal,
he was taken ill with pneumonia on his way to Europe and died in Glasgow, Scotland.
​
Eagleton, Lafayette E.
From Ladonia.  Killed in France.
​
​
England, William E
Son of H. B. England of Telephone Texas.  Left the states September 16, 1918.
Contacted pneumonia and died on October 6, 1918 at Glasgow, Scotland.
​
Merrill, Joseph Binkley  (son of James B. and Belle Merrill of Ladonia.
In Company E, 359th Infantry (part of the 90th Division.)  Died in engagement
at Barrenthville in the Meuse-Argonne offensive.  Buried in France.
Information and photo from History of Texas World War Heroes.
Norton, John Winston
A graduate of Honey Grove High School and for a time City Attorney of Honey Grove,
​he died at Jefferson Barracks in Missouri of influenza.  He had a long, moving obituary
Honey Grove Signal.  Click on his name above to read it.
Rogers, Thomas Simeon
According to Honey Grove Signal, he left New York on September 20 and died on
October 4, 1918  of bronchial pneumonia likely in France or England soon after
his arrival there.  His sister, Jessie Rogers, died in Honey Grove of influenza
on November 10, 1918.​​​
Shelton, Ruffus  The first boy from Fannin County to be killed in World War I.  He
was under draft age, but volunteered and was with the first group of American
troops to France.  He was in the first fighting in which American troops
​participated.​​
​

​Stevens, Foster J. (son of Mr. and Mrs. T. J. Stevens, born near Ladonia.
In Company B, 142nd Infantry, 36th Division.  Moved into the trenches
October 6, 1918 at St. Etienne.  Reported missing in action October 9, 1918,
and on June 27, 1919, officially declared dead, presuming killed in action.)
Information and photo from History of Texas World War Heroes.
Tarpley, B. W.
​Born in Dial.  Volunteered as a shipbuilder.  Died overseas of pneumonia.
​​Walker, James P.
​Son of Lee and Leah Walker of Ladonia.  Attended Ladonia High School
and Baylor University.  His first teaching was at Bagby School.
Killed in action in the battle of Chateau-Thierry, acting as Corporal.
​
Watts, Bedford
Died in France from wounds received in action.
View on Mobile