Includes those who died while in service, even if not in Action.  These lists are under development.  Please let us know if you have names to be added.  Thanks to Freida Moreland for helping with this project.

Covington, Jack Baker (a graduate of Honey Grove High School.  His parents, Mr. and Mrs. Eli J. Covington, lived in Texarkana at the time of his death)

Dawson, Andrew B.  (Per the Bonham Daily Favorite, March 5, 1944, Private Andrew B. Dawson, son of Amy M. Dawson, living a few miles northeast of Honey Grove, died January 12, 1944 in a hospital at Brisbane, Australia, from natural causes.  Burial was in Australia.)

Edens, Willie (attended Flag Springs and Windom Schools.  The son of Mr. and Mrs. C. W. Edens who lived in Windom at the time of his death.  Killed Jan. 22, 1944 in Italy at Anzio Beach Head.  Buried in Sicily-Rome American Cemetery, Nettuno Italy)

​Robinson, William M.  (son of Mr. and Mrs. L. C. Robinson, who was shot down at Meresberg, Germany.  Liberated at Schiverin, Germany on May 2, 1945 by the Eighth Armored American Division) 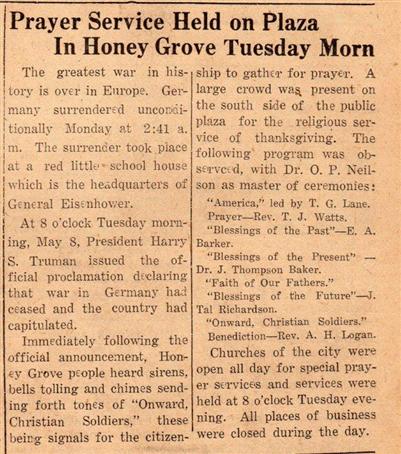 The greatest war in history is over in Europe.  Germany surrendered unconditionallly Monday at 2:41 a.m.  The surrender took place at a red little school house which is the headquarters of General Eisenhower.

At 8 o'clock Tuesday morning, May 8, President Harry S. Truman issued the official proclamation declaring that war in Germany had ceased and the country had capitulated.

Immediately following the official announcement, Honey Grove people heard sirens, bells tolling and chimes sending forth tones of "Onward, Christian Soldiers," there being signals for the citizenship to gather for prayer.  A large crowd was present on the south side of the public plaza for the religious service of thanksgiving.  The following program was observed, with Dr. O. P. Neilson as master of ceremonies:

"Faith of Our Fathers."

Churches of the city were open all day for special prayer services and services were held at 8 o'clock Tuesday evening.  All places of business were closed during the day.