​The registration for army service in Honey Grove was much heavier than was expected.  All told, 435 men registered for service at the two Honey Grove boxes.  Of these 292 were whites and 143 colored.

Negroes to the War.

Fifty Fannin county negroes left Bonham Tuesday for training camps to fit themselves as soldiers for the great war in Europe.  This is the first consignment of negro troops called out, but doubtless there will be others. And let no one dream that the negro troops will not give good account of themselves on the battlefield. In the engagements in which negroes have participated they have shown that they have all the qualities that go to make good soldiers.  Negro troops saved Theodore Roosevelt and his Rough Riders at San Juan hill, and in the campaign against Villa in Mexico negro troops covered themselves with glory, The negro is a loyal American citizen, he loves his country and will fight for its honor.

A patriotic service was held at the colored Baptist church in this city Sunday in honor of the negro boys who went from here. It was a very fine service, with a few white people participating and lending assistance. Honey Grove and the surrounding country furnished ten of the fifty negro boys who left for the training camp Monday.

To the Colored Farmers and Colored inhabitants in and a round Honey Grove, Texas:

This comes to say to you that we, with the whole world, are confronted with conditions that never have been before us in all the world’s history.

Unwillingly we were forced into this world-wide war. Since our sons, relatives, neighbors and friends have gladly gone and are willingly going to the front for the sole purpose of winning this war in order to establish a wide-world Democracy, it behooves us who are left behind the firing tines to do our bit.

Let us begin now by doing all in our power to grow everything we can from a good garden to all farm commodities. If all can't farm we can make a good garden. Let each one be determined to let no man grow a better variety of crops, and a better garden than he, let him be white or black. If you have not planted your garden, plant it as once.  I have commenced, and before completing gave it a name known as "win the war" garden.  May I persuade you to do your best along the above-named lines, so when this war will have ended with our victory, and the roaring of the cannon ceased and the smoke is cleared away, we all will be able and can truthfully say, we helped win this war.

We are told that all the colored boys who went to the army training camps from Honey Grove in November have been sent to France. A card was received Monday from Theo Nicholson, saying he had arrived safely in France. Theo is a blacksmith and is in the machinery service. 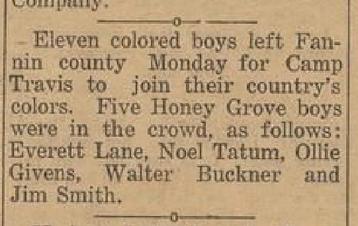 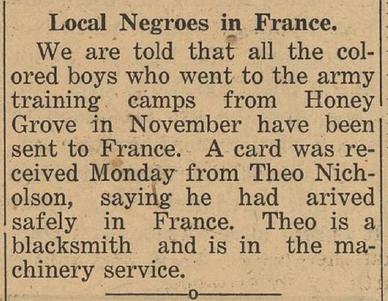 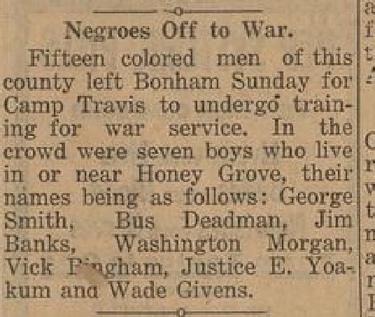 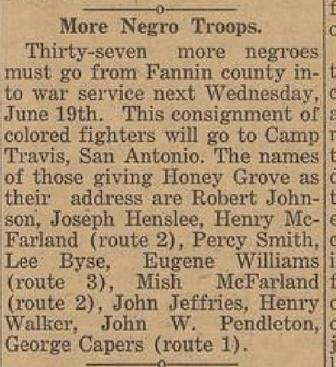 Negroes Off to War.

Fifteen colored men of this county left Bonham Sunday for Camp Travis to undergo training for war service. In the crowd were seven boys who live in or near Honey Grove, their names being as follows: George Smith,    Bus Deadman, Jim Banks, Washington Morgan, Vick Bingham, Justice E. Yoakum and Wade Givens.

World War I and the Contributions of the Black Population

From a Colored Soldier

[The Signal has printed many letters from our white soldier boys, but here is one from a colored boy who did his bit in winning the war. In this connection we are proud to state that all the white boys, as well as the officers, have borne testimony of the loyalty of the colored boys to their country and of their bravery in battle].

Somewhere in France, November 11, 1918.—Dearest little Mother! With pleasure I address you a few lines to let you know that l arrived safe overseas and had a very pleasant trip across. Now, mamma, you must not worry about me, for I am well and happy. I am with a fine bunch of officers and they are nice to us and take the very best care of the men of our Company. France is a very pretty country, but a little odd. I wish you was with me on this trip to see how pretty France is. I know you would enjoy it. Now, I hope you are all well. Tell grandmother she will not know me when I come home—I am as fat as a pig. Well, I am learning to talk French; will soon be a real Frenchman. Ivan Smith is still with me. I have not seen any of the home boys yet. When you write be sure and send me Theodore's address. Say, do you ever hear from Roscoe, and is he still in Camp Travis?.. Mamma, when have you seen Frances and Mary Alice? Whatever you do, see that they want for nothing now. Tell little Lige I will write him soon. I am very busy now. Give my love and best wishes to Shorty, Uncle Lige, Mack and Shaw. Tell Shaw and Mark there is plenty of wine in France; they had better try swimming across, as there is nothing doing in that line in Texas. 1 will write you a longer letter soon, mamma. You must write me three times a day, so I can hear from you often, Kiss grandmother for me and tell her to pray for me. I think I will be home soon. Bye, bye. Answer at once.

From the Dallas Express:

February 8, 1919
Honey Grove - Mr. Walter Campbell has been honorably discharged from Camp Travis is here with his wife.

February 15, 1919
Honey Grove, Texas, Feb. 13 -  Mr. James A. Lee has returned home from Camp Travis, being honorably discharged.  Mr. Lonnie Littles had returned home from France and he tells many wonderful tales about the boys across the sea.

February 28, 1919
Honey Grove, Texas - Sgt. Grant Loggin sent his father, Sam Loggin a German helmet from France and says that he was well and expecting to sail for home soon.

May 10, 1919
Honey Grove, Texas, May 8 -  Private Columbus Brazzleton remains were shipped here from Camp Bowie to be buried; funeral was attended by Rev. J. R. Swancey.

July 19, 1919
Honey Grove, Texas, July 17 - Mr. and Mrs. Lige Tatum gave their son, Mr. Noel Tatum, who has just returned home from France, a swell party Wednesday night, July 9, 1919.  The home was beautifully decorated in red, white and blue colors; the lawn was also beautifully arranged.  The guests numbered over seventy-five and thirty being present from Bonham.  Music was furnished by the famous Bonham Orchestra. 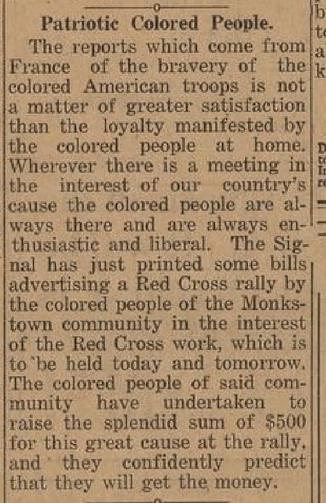